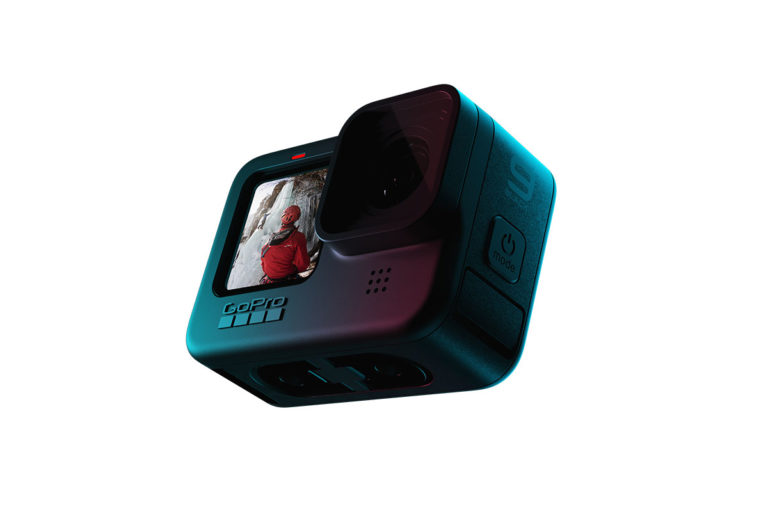 Well, it’s here: the latest GoPro. This time it’s the GoPro HERO9 Black action camera, which GoPro has tagged as: “More of Everything”. And they aren’t kidding.

About the GoPro HERO9 Black

Well, you know the general concept of GoPro cameras: they’re small cameras with, these days, 4K (at least) resolution; they’re waterproof – to ten metres – and they’re robust. And they work with all manner of accessories, since GoPro established the standards and everyone else conforms to those. The HERO8 Black and HERO9 Black both have fold out tabs on their undersides, allowing use of these accessories without the need for a frame.

They run in three basic modes: photo, video and weird video. By that last category I mean modes like time lapse and time warp. The video gets digital stabilisation – GoPro’s system is called “Hypersmooth” – and all recordings are made to a microSD card. Lately they’ve had just one physical connection: a USB Type-C underneath the waterproof door. But just as there’s a MediaMod for the HERO8 Black, there’s also one for the GoPro HERO9 Black ($129.95, minus 30% for GoPro subscribers). This adds HDMI out and analogue microphone in – and also has a couple of cold shoes for mounting accessories, along with a built-in directional microphone.

The wireless connections are Bluetooth and Wi-Fi. You can control the cameras with an app on your phone.

Well, probably because the GoPro HERO9 Black has, as GoPro says, “More of Everything.” Such as:

If you want light wight and more compact size, then pick up a GoPro HERO8 Black.

Well, all that’s not quite “More of Everything”. But it is more of a lot of stuff. While all the old stuff remains in place, including voice activation and a long list of smaller items which you’ll learn about as you use a GoPro. But one final feature we must mention is the streaming capability. We’ll see how well that works shortly.

You control the GoPro HERO9 Black in the same way as recent previous models. A single button on the side switches the unit on and off, and briefer taps cycle it through the three main modes. Tap on the displayed mode on the rear monitor and you can edit it. You know, you can change the resolution of video, or the frame rate. Tweak the way you want one of the time lapse or time warp modes to work. Play with the slow-motion settings. Whatever. The single button on top is for starting and stopping video recording, and taking a photo. By default, the record button can also wake up the camera and start recording straight away, getting you going sooner.

The door over one side keeps the battery, the USB Type-C port and the microSD card safe from water (for up to ten metres in depth).

I did most of my testing either using the TimeWarp mode at auto speed, or taking 4K video. The 5K mode will, I’m sure, be useful to professionals. The more pixels the better as a general rule when you’re doing a lot of post-production work, grading colour and brightness from various sources. But for me, “4K” – actually, 3,840 by 2,160 pixels – matches the TVs on which I view my recordings.

These were uniformly bold and clean, as seems to be the case for GoPro cameras in general. For TimeWarp, I put it on the mount on the front post of my bicycle – it may be a little bigger than the HERO8 Black, but it still fitted fine – and went for a ride. I chose the Linear + Horizon Levelling digital lens. And, by golly, it worked. It worked even though the recording format was 4K60p. I had feared that with 4K60p and Hypersmooth on, Linear + Horizon Levelling might not work. I’ve done the same kind of thing with the GoPro HERO7 Black and GoPro HERO8 Black, but with these as I went around bends on my bicycle, the video shows the world leaning to one side or the other. With the GoPro HERO9 Black, the world remained level and the bike’s front wheel, which was in-shot, was what leaned to one side or the other.

The combination of improvements in TimeWarp and the introduction of horizon levelling made the video much smoother than similar footage I shot on a GoPro HERO7 Black. I could see things much more clearly throughout.

GoPro says that the new bigger battery gives the camera around 101 minutes in 1080p video mode. Higher resolution and switching on more features would obviously shorten than. My 26 minute ride with the above settings reduced the battery level from 90% to 60%.

The Hypersmooth 3.0 was, well, extremely smooth. I love this. A while back I was trying to think of a way to get my hands on a stabilising gimble which I’d be able to keep. Such a thing would still be useful for a largish mirrorless camera. But if you don’t need to zoom or anything like that, the results delivered by the GoPro HERO9 Black were pretty amazing. Good smoothing algorithms aren’t as easy as they may initially seem. The hardest part is getting the algorithm to distinguish between intentional movement, such as panes, and unwanted movement, such as camera shake.

The GoPro HERO9 Black seemed particularly good at this. I went for a walk with the camera, holding it in loose hands so that it tended to bounce and wobble. Most of the vibration was taken out by Hypersmooth. The bits left in were the result of ridiculously large bumps during recording. Taking just a little more care, the capture was as smooth as though the GoPro HERO9 Black was mounted on cinema rails. Yet, when I went to pan around there wasn’t much of a hesitation while the camera worked out it was supposed to be moving. I’ve been thinking how it might have managed this performance. One possibility is that it buffers the incoming data, and holds off making decisions on stabilisation until it has a few more frames to see whether the movement is going to continue, or come to an abrupt halt.

Using the GoPro HERO9 Black as a webcam

I’ve been a little remiss in not mentioning that in recent months GoPro has added to the HERO8 Black the ability to be a streaming camera which you can use in your Zoom calls and whatnot. Naturally the GoPro HERO9 Black has also scored this capability. The procedure is straightforward: you install the GoPro Webcam software on a Windows computer or a Mac, run it, plug in the GoPro HERO9 and then select the camera in the communications software of your choice.

The Windows version of the software is still in Beta. You have to register for a Facebook page to get access and it may take some hours before you are approved. I checked the software on both a Windows notebook and a Mac Mini.

In both cases, the software installed smoothly and placed an icon on the status bar. A blue dot on the icon means the camera is connected, while a red dot means it is operating.  The front screen of the camera shows the middle part of the image being captured. Watch out for this. It does not show the whole frame so something could be captured in your stream that you can’t see. An associated menu allows you to show a preview window of what your GoPro HERO9 Black camera is seeing. You can also pause it, switch between 1080p and 720p resolution, and choose one of three digital lenses. They are Wide, Linear and Narrow. I found that last was best when the camera was half a metre away from my face.

Missing is a 50Hz/60Hz anti-flicker adjustment, so the mismatch between room lights and the frame rate of the camera produced a slightly irritating flashing in the video stream here in our 50 hertz land. On the Mac the software automatically rotated the image between landscape and portrait mode. On Windows, it was locked into landscape mode.

I didn’t particularly want to call anyone, so I fired up Photo Book on the Mac to see how it worked with the GoPro HERO9 Black as a webcam. Not at all. It turns out that this doesn’t support GoPro. Likewise for the Camera app in Windows 10. The applications that are supported are Zoom, Google Meet, Microsoft Teams, Skype for Web (when using the Chrome browser) but not the Skype app, Twitch via OBS, BlueJeans, GoTo Meeting, Snap Camera, Facebook Rooms and, again using the Web version in a Chrome browser, Zoom, YouTube Live and Webex. I used it with the Web version of Skype and it worked just as a streaming cam should.

It has enhanced capabilities, a noticeably longer battery life and despite the size and weight gain, its still wonderfully small. And since it’s cheaper with the subscription, why not sign up for a year and see if you like it?

Features
Value for money
Performance
Ease of use
Design
Great performance
Expansion of capabilities
In camera horizon levelling
Webcam streaming control could use 50 hertz anti-flicker
A little bigger and heavier than previous models
4.7