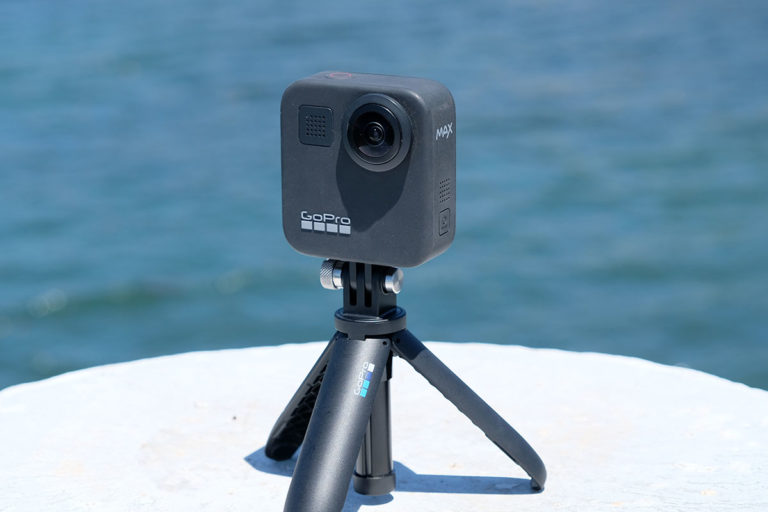 You thought the GoPro HERO8 Black was the company’s current top of the line action camera? Well, based on price that title goes to the GoPro MAX. But, as we’ll see, both the HERO8 Black and the GoPro MAX really are optimised for somewhat different roles, despite a significant overlap.

But, first, before getting into the review, I want to mention GoPro is currently running a competition in which you could win one of five GoPro HERO8 Black or GoPro MAX cameras. Until 30 April 2020 the company is hosting the #HomePro Challenge. You can enter with video and photos shot on any device. Go here for details.

UPDATE 8 May 2020: GoPro has now officially released the firmware update for the features described, below, in “Coming GoPro MAX features”.

You can read our review of the GoPro HERO8 Black here. As you can see, we simply loved it. So what’s so different about the GoPro MAX? A clue comes from the fact that there are camera lenses on both sides of the unit. And those lenses aren’t hidden away in a protective housing like that on the HERO8 Black. No, they are quite bulbous, protruding out by a couple of millimetres. That’s because this is a both a regular action camera and a 360 camera.

Just a recap for those not entirely familiar with 360 cameras. The idea is that the camera can take still photos and video with a 360 degree of view. Let’s consider what that means for a photo. When you look at the photo you can slide it around so that you can look forward, look back in the other direction, look to the sides or at other different angles. Indeed, you can slide the picture down so that you’re looking directly up, or the other way so that you’re looking down. When you’re viewing the picture, it’s like you are on the inside of a sphere, with the full scene painted on its internal surface. You can see everything in every direction. You can get a sense of this by looking at street view on Google Maps, although the GoPro MAX kills that for quality.

The camera can do this because each of the two camera modules takes a full 180-degree view. When in 360 mode, the two images are stitched together in software to make what one hopes will be a seamless whole. We’ll get to how well it does that soon.

Six microphones also let the sound be 360-ish and encompassing.

But remember, it’s not just spherical photos that the GoPro MAX can capture, but spherical video. This is, after all, an action camera. Spherical video ends up at 5.6K resolution and can be shot at 24fps or 30fps. (And, very soon, 3K at 60fps. See the next section.)

But the GoPro MAX can also operate in traditional “HERO” mode. It cannot do 4K video, though. Instead, you can have it capture 1080p in 16:9 format at 24fps, 30fps or 60fps. There are four fields of view available. The standard is “Wide”, which is 16mm equivalent. You can zoom in a little with “Linear” (19mm), which also processes out the curves produced by the near-fisheye lens. “Narrow” is 27mm, which is similar to that used by the standard camera in most phones. But there’s a new extremely wide setting, Maximum SuperView, which is 13mm equivalent.

The other video option is higher in resolution – 1,440 pixels wide – with the same frame rates and fields of view, except that this is in 4:3 aspect ratio. The maximum video bitrate is 78Mbps. You can choose whether you want to use H.264 (aka MPEG4 AVC) or H.265 (HEVC) for the video format. The latter gives higher quality for the same file size. The former is more widely compatible with other software.

Amongst the features are video stabilisation and horizon levelling. Both of those are digital, and both are great. I could tilt the camera at 45 degrees while videoing and the image would stay rock-solid horizontal. Walking through some narrow streets in the old city of Athens, I could have just as well been using a Steadicam or other hardware stabiliser.

Okay, I’ve outlined the video features of the GoPro MAX as they were a couple of weeks ago, and indeed as they officially are while I’m writing this. But with upgradeable firmware, features gradually improve over time. So the GoPro MAX is a more powerful device now than it was, and will be even more powerful in the future.

I’ve actually had a GoPro MAX to hand for months now. I delayed the review because the first one had an audio problem. It proved to be defective, but it took me a while to convince myself that it wasn’t merely, ahem, operator error. Then I held off a bit longer because I had a trip coming up which I know would provide some spectacular locations in which to use it. Then a new firmware was on the way. As I’m writing, the review GoPro MAX has a preview version of the firmware including the latest features. These add time lapse video and photo to the 360 mode. But the most important change is to add 60fps to your 360 mode filming choices. You lose some resolution – this runs at 3K instead of 5.6K – but for real actioners the higher frame rate will be worth it. And you can play it back at 30fps for slow motion. The preview version also extends horizon levelling to the TimeWarp and Photo modes.

You can shoot 5.5MP flat photos using the GoPro MAX. Only the Max SuperView and Wide fields of view are available in photo mode. When I’m using a digital camera I switch on the indicators which allow me to make sure that I’ve got the camera properly horizontal. No need with the GoPro MAX. With the upcoming firmware, it includes horizon levelling in photo (and TimeWarp) modes. In the settings you can find a lot of manual photo adjustments under the heading Protune.

There are lots of clever modes combining still and video. Time lapse, for example, takes regular still shots at an interval you select (between half a second and an hour) and turns it into video. TimeWarp is similar except that it applies video stabilisation so you get nice smooth output. An Auto setting for TimeWarp has the GoPro MAX deciding on the best speed, moment by moment. It’s all a lot of fun. There’s also a 270-degree panoramic mode with automatic horizon levelling. You can scan in three seconds or ten seconds.

With the forthcoming firmware, you can also do time lapse video in 360 mode.

While I imagine most action-orientated people will mostly use the 360 video mode, I loved the still mode. It uses 16.6MP output resolution for the photos.

Those stereo photos are excellent for giving a good appreciation of a whole scene. Now, you might think that your hand is going to dominate a shot since it’s pressing the shutter release button on the top, but in 360 mode the GoPro MAX gives you three seconds to move your hand before it takes the shot.

The GoPro MAX is significantly bigger than the HERO8 Black. In particular, it stands quite a bit taller at 69mm. It’s 64mm wide and 25mm deep. Like the HERO8 Black, it has two built-in tabs at the bottom. Fold them out and you can attach it to standard GoPro accessory shoes and stands. The unit can be immersed in water – and used – at up to five metres of depth. With battery and SD card, and without lens caps, the GoPro Hero 8 weighs 157.5 grams, or around ten grams more than an iPhone 8.

The 4.3cm 16:9 touchscreen is clear and the touch works reliably.

On one side a door reveals the battery compartment, the microSD card slot and a USB Type-C port for charging and file transfer. Using that port to copy over half a dozen videos resulted in a transfer speed of around 64MB/s.

You can run the GoPro MAX entirely on its own, with full control via the onscreen menus. Some of the more commonly used functions have onscreen shortcuts. Or you can use the GoPro app on your phone to control it, sometimes a little more easily given the greater screen real estate. You can flip between front and rear lenses with the tap of an onscreen button when you’re in “Hero” (ie. non-360) mode. As always with a GoPro, you’re going to find life a lot easier with some suitable accessories for mounting the camera. At the least, an extending tripod and a clamp for your preferred mode of transport are worthwhile. I have a GoPro mount on my pushbike. The TimeWarp trips are often fun to review.

The colour was bold. Video and photos were both good quality. But what we’re really here for is the 360 function, otherwise you’d go for the higher resolution HERO8 Black. Six months ago with the unit that proved to be defective, I though the stitching together of the two halves of a video or image were okay, but not seamless. But with the replacement the stitching has been perfect.

You can use the GoPro app to view all the media on a GoPro MAX with a direct Wi-Fi connection. This lowers the resolution for snappy performance. Alternatively, you can download the material to your phone and get full resolution.

Things are a bit trickier with computers. Well, if you have a Mac you can use the GoPro Player. “For GoPro MAX users,” says GoPro, “this is your ideal solution.” But there’s no Windows version. So you need to install the GoPro Max Exporter which lets you convert your downloaded 360 videos to Cineform, HEVC or H.264 format, which then works in the GoPro VR Player 3.0.

If you have VR googles, you ought to be able find some way of viewing your stuff. As for me, I used the H.264 at 4K resolution option in the GoPro Max Exporter software, and then I could view the resulting files on my LG OLED TV in 360 mode, flipping the video around with the TV’s Magic Remote.

As for 360 photos, you can just upload them straight to Facebook via the app. Facebook supports the whole spherical thing.

If you want an action camera, then something from the GoPro line is a no-brainer. But the HERO8 Black or the GoPro MAX? Unless you really want the 360 function, then choose the HERO8 Black. It has full 4K, a wider range of accessories and costs a couple of hundred dollars less. But, by golly, the GoPro MAX comes very close on all the other features and functions, and adds that truly immersive sense that can only be delivered with 360 photos and video.

You can purchase the GoPro MAX at the usual retail outlets or directly from GoPro here (this one includes a free 64GB microSD card).