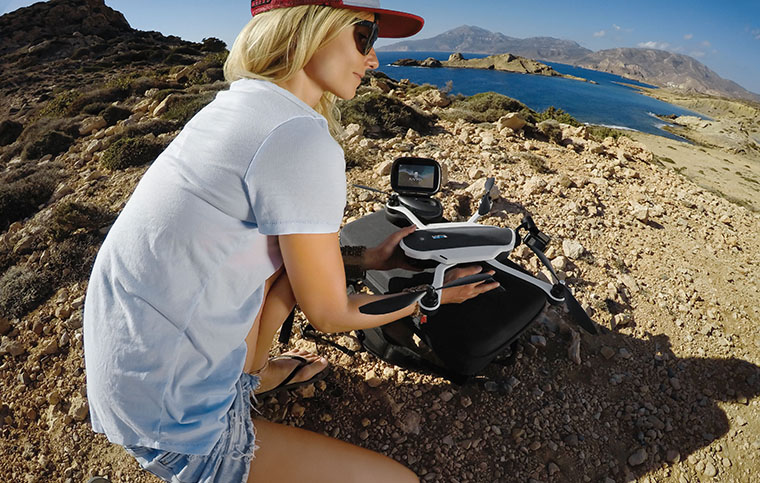 When we reported on the launch of GoPro’s Karma drone back in September last year, we of course had no idea of that they’d soon be falling out of the sky. But not long after launch, an unknown number of them lost power and plummeted back to the earth. Soon after, GoPro issued a recall, retrieving the 2500 drones that had been reported to have sold.

Incidentally, it speaks well of GoPro’s action cameras that so many of them captured the descent of the Karmas to which they were attached, survived the fall and continued recording. Youtube documents these events.

GoPro says that the problem was “related to the latch mechanism which secured the drone’s battery. A redesigned battery latch,” it says, “has been incorporated into the updated Karma drone to solve the issue.” Those damned batteries, always causing trouble!

Amongst the selling points are the all-in-one nature of the product, the ability to buy with a GoPro HERO5 Black camera, and the way it folds up for transport in the included backpack. Reviewers suggest that it might not be the most nimble drone on the market, but that it was sturdy, easy to fly and provided a very stable platform for video work.

The release is in limited numbers and for sale in the United States only for the time being, although announcement of an Australian launch date is expected soon, and production is being ramped up.

US pricing is $US799.99 without a camera, and $1099.99 with the HERO5 Black GoPro camera. Those who own the Karma Grip motorised stabiliser can purchase the Karma drone sans Grip for $599.99.

GoPro’s troubles with Karma included not just the recall, but delays from the originally planned launch date of early 2016. GoPro’s interest in the concept of a drone was piqued in 2013 when GoPro founder and CEO Nick Woodman was approached by DJI, the now leading drone maker from China. GoPro and DJI were unable to come to an agreement, and after some work with 3D Robotics, another drone maker, GoPro decided to go it alone.

But it turns out that designing and building drones is hard. San Francisco startup Lily Robotics is now under investigation by American authorities after announcing in the middle of January that it was closing down. That was without having delivered any of the pre-ordered Lily Camera drones for which would-be customers had paid $US34 million.

The investigation concerns in part the video Lily produced in order to raise funds. It purported to show Lily’s own prototype in action, and footage therefrom. But it turns out that at least some of the footage was from a GoPro camera, which Lily sought to disguise, and was taken using a $US2000 DJI Inspire drone.

In October last year 3D Robotics, with which GoPro had earlier partnered, shrunk significantly and pulled back from the consumer market to concentrate on commercial applications. French based Parrot SA announced last month that it would be cutting one third of the staff related to its drone products.

And of course, GoPro itself reduced staffing by a couple of hundred after the Karma recall.