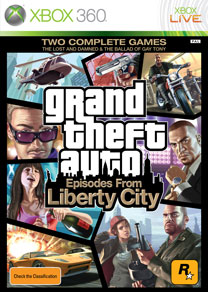 Episodes From Liberty City is a ‘standalone’ game release in the Grand Theft Auto IV universe, meaning you don’t have to own the original Grand Theft Auto IV game to play – this will work right out of the box, providing you with both the new content ‘add-on’ s to play through. The first, The Lost and Damned has been covered elsewhere on the site and brings a lot of motorcycles and Hell’s Angels-style shenanigans to the mix although not much else, but there’s a lot to like about the newest content, The Ballad of Gay Tony’, too, so we’ll focus on that.

In The Ballad of Gay Tony, mission objectives are more varied than in previous installments – an absolute necessity given the routine assignments we played through in the last downloadable episode – bringing a much stronger focus to bear on helicopters which, in my opinion, is a machine you can never have too much of and, along with the improved checkpointing first seen in biker Johnny Klebitz’s story The Lost and Damned, marks a huge improvement to the game. There are fewer ‘go here, kill this’ missions and better use of the vehicles; aside from the helicopters just mentioned, there’s now more reason to avail yourself of the odd powerboat or two and parachutes also make a welcome return. These can be used for BASE jumps, both as part of missions or races and just for the hell of it, and despite rather ragged controls, are a really fun addition. It’s good to play as Luis Lopez, The Ballad of Gay Tony’s protagonist, who is a little more rounded and grounded than the previous two leading men. There are some new weapon variations, although nothing outright stunning, and a new reporting system when you complete missions, scoring you on a number of parameters that, if met, will result in bonus points.

Complementing the story-driven main mission mode are a couple of worthy extras. ‘Drug Wars’ sees you lending a hand to a couple of friends from your younger, more ill-disciplined days, helping them make names for themselves in the local drug scene and these amount to lots of gunfights, essentially. Then you have the sporty game modes like golf and the base jumping, which are a good diversion that don’t involve causing mayhem. And to underline how developer Rockstar has tried to create an immersive and realistic city for their stories, Luis can even run into old flames or other acquaintances that will send him on a side errand of some kind. The first few of these are fun, just to experience this ‘interwoven narrative’ element of the game, but grow stale fast. ‘Club Management’ and the other club-related activities are far less satisfying and a little silly, though, and be sure to keep the kids out of the room if you want to initiate any of the game’s ‘Booty Call’ sequences or partake of the ‘Dancing’ activity in the clubs!

So some of the new stuff is great. But Episodes From Liberty City has a lot of old stuff too. The clunky movement hasn’t changed which, along with an errant and obstreperous camera system, can make simple movement and navigation a frustrating chore in itself. You can’t negotiate environmental elements that look like you should be able to – you’re not able to climb a simple ladder, for example, even though it’s right there in front of you and there’s no earthly reason you can discern to prevent you from doing so (except the game designers don’t want you to). It’s easy to get ‘stuck’ on scenery when trying to duck for cover and wild camera swings can cause unpredictable results.

This clumsiness disappears when you’re in a vehicle, thankfully, where it actually feels as if the team has tightened up the vehicular controls considerably, making them a lot of fun to drive. But then it comes back with a mighty vengeance if you attempt to engage in combat which, of course, happens every few minutes. In a gunfight the lock-on and targeting system is so poorly implemented that, coupled with the equally scatty game camera, there’s almost no need for the bad guys to do anything. You’ll find yourself constantly restarting some missions not because you’re not skilled enough to complete it but that the game’s controls and camera have conspired to truss you up like a turkey and deliver you to the Grim Reaper. And when you die, there’s no quick restart, so instead the loading times kick in and you have to sit and wait for it to load the ‘leaving hospital’ reset, then sit and wait again for it to re-load the checkpoint and – just to stick the boot in while you’re on the ground – the game will take away all your cool weapons in the process, so now you’ll have to re-do the bit you just died on but with less firepower!

How much these issues will affect your enjoyment of this latest installment will probably depend on how you play the game. It’s possible to just ‘tool around’ in the gameworld, of course, racing and shooting, and this can be really entertaining in one of the multiplayer modes – especially in Free Mode, where there’s no pressure to do anything if you don’t want. If you like to go through the single-player campaign game, however, you’ll almost certainly experience the frustration of the game’s legacy control issues. The new storyline is entertaining: a long way from rivaling a real book, but there’s a strong focus on the relationship between your character and the titular Gay Tony, as well as some great supporting parts, all of which are endearing in a weird way.

The Ballad of Gay Tony does a good job of presenting an entirely new perspective for hardened Grand Theft Auto IV fans to enjoy, certainly, but it does nothing to attract any new players, who will be frustrated at the poor camera and combat systems and wonder why the game wants to make them hurt so bad. Helicopters and BASE jumping parachutes are cool, but aren’t enough to absolve punishing missions and wonky controls.