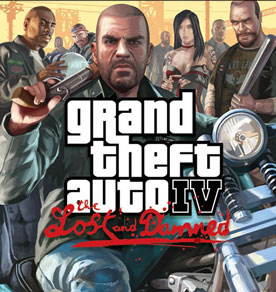 Grand Theft Auto IV: The Lost and Damned brings to mind an Armenian proverb that goes “He who tells the truth must have one foot in the stirrup.” That’s how we feel with this PDLC – or ‘Premium Downloadable Content’ – from Rockstar which, once you’ve paid your 1600 points, a small outlay of just over 25 bucks, brings you a whole new chapter in the life of Liberty city. Because that’s the point, really. It is a whole new chapter, replete with a whole bunch of new missions, but not much else.

Played out amongst the titular ‘Lost and Damned’, a retrograde (renegade?) motley crew of violent, throwback biker types who slot neatly into the frightened public’s stereotypical view of ‘Hell’s Angels’. And hey, I’m sure there are still biker gangs who run around terrorizing folk in the States, just as we have 17 notorious outlaw biker gangs in Melbourne alone – or ‘bikies’, as the typically infantile vernacular would have it – so chalk another one up for authenticity.

And it’s that grim authenticity we’ve come to associate with Grand Theft Auto IV which paints everything that stands still long enough with the same supremely grim brush. Bad language is as prolific as the gray paint Rockstar’s artists have slapped around the joint, so this is definitely not one for the kiddies. Who it most suits, in fact, is the gamer that couldn’t get enough of the original game and quite literally just wants more of the same. The same ‘travel to the starting point’, ‘watch cut-scene’, ‘kill loads of people’, ‘watch cut scene’, rinse and repeat that formed the basis of the full game.
But the saving grace, as before, is the game’s sheer volume, along with that ‘gnarled’ narrative. Not quite the literary masterpiece some more excitable quarters claim, The Lost and Damned’s storyline at least feels appropriate, perhaps even realistic, and sets new standards for exposition in videogames. At least the main game did, and this add-on assumes the relay baton with great success.

The Lost and Damned raises expectations on what ‘premium downloadable content’, or extra content you pay for, should be, sure, but then Rockstar have been handsomely compensated for doing so and, at 1600 points, it’s considerably more expensive than extra content from the competition and a third as much again as buying a full Xbox ‘classic’ game. Apart from a few tweaks, however (a new checkpoint system being the best), there’s nothing new here that affects gameplay in any major way. The upshot being that the Lost and Damned has breathed more life into GTA IV, so get it if you’ve finished the game and need another fix, but not new life.

From the Rockstar site:

Alternatively, you can purchase The Lost and Damned from the Xbox LIVE Marketplace website and have it ready and waiting for you the next time you go online with your Xbox 360.