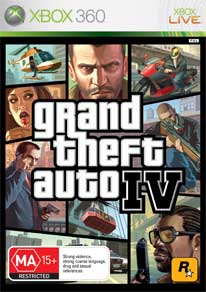 Videogames, like any other entertainment medium, can benefit or suffer from massive media hype, and Grand Theft Auto IV, or GTA IV, has certainly experienced both sides.

An incredibly ambitious achievement, GTA IV drops the player in the shoes of a gruff but very likeable Eastern European character who finds himself in criminal company when he goes to visit his cousin in Liberty City, the setting for the game. What it does right, is that Liberty City is teeming with activity: it’s zoned, like a real city, with great variations in road systems, architecture and even social groups, with utterly convincing detail. What it does wrong is mostly technical, which become easier to forgive given the amazing, living, world developer Rockstar has created for this game. But not forgive completely.

If you’re a parent reading this, you’re probably going to be worrying – or at least wondering – about all the newspaper and other stories circulating right now concerning the level of graphical and verbal violence in this game, and if it’ll be bad for your kids. We’ll just say this: there’s plenty of violence, very frequent bad language and partial nudity in the game. So, if you don’t let your kids watch TV or movies, read books or browse online with this kind of mature content, you probably shouldn’t let them play this game. The rating of MA15+ is there for a reason, after all.

GTA IV is a huge, huge game. The environment is actually smaller than the last game in the series, but Liberty City is still massive, with it taking several minutes to cross from one side of the city to another if you choose to drive one of the many in-game vehicles. Happily, if you’re of a more impatient disposition, a new innovation is the ability to ‘warp’ instantly to any previously-visited major location on the map.

Everywhere you go, something interesting is happening – we took a detour off one particular mission (OK, so we lost control of the bike and ended up in fencing!) and blundered upon a mugging, where two thugs were beating up on an innocent businessman. They scattered on our arrival, leaving us to pick up the piles of cash they’d dropped; a nice surprise. If the police start chasing you, all manner of alleyways, shortcuts and tunnels are available to you for hiding purposes and, thankfully, their chase ends if they lose sight of you, making escape a much more likely outcome than it was with the previous game.

The story is very good. The character you play, Niko Belic is not the usual crazily-muscled taciturn bad-ass you normally see in action games, but a much more finely textured individual; tough but with a very amiable disposition, hardened from war in his own country but willing to find the good in his new circumstances. The repartee between him and his cousin, as well as other characters in the game, is a definite high point.

And there’s lots of ‘ambient’ chatter, including in-car conversations with the friends you make, or even the cabbies if you elect to hail a taxi, and one-liner quips from passers-by. In fact, since the content of the vast majority of the game’s missions are actually very straightforward, it’s this story treatment along with the realization of the environment that really produce the magic of this game. Its ‘sandbox’ nature – effectively allowing the player to create his own narrative as he plays – is GTA IV’s great achievement.

But there are several elements preventing this game, in our opinion, achieving the lofty 100% grading others seem to be falling over themselves to award. It often feels like you’re wrestling with the game camera, pushing and pulling on the controller sticks to wrench it around to the viewpoint you want. If you fail a mission, even a really lengthy one, you have to start it all over again – no checkpoints here. The AI, or Artificial Intelligence, of the traffic, especially, can be downright dumb, causing far too many crashes and the draw distance often so low that vehicles appear to just pop up out of nowhere right in front of you. Causing more crashes. And, speaking of crashes, with so much data to be pushing around to make this amazing environment work, the game itself sometimes crashes, freezing the onscreen action and accepting no input at all, forcing a reboot of the system.

So it’s not without its frustrations but, on the whole, GTA IV delivers a quite memorable gaming experience.

Grand Theft Auto IV is available for the PlayStation 3 and Xbox 360 consoles.