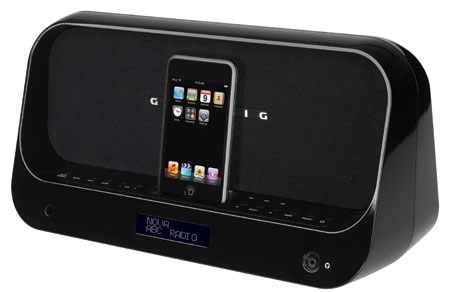 A combination digital radio and iPod dock, the Grundig GDR710DABIP boasts an unusual tapering design, being thicker at the bottom than top. The control buttons are located on a thin flat shelf at the front of the radio, which can make them a little difficult to access. Thankfully, it also comes with a credit-card remote that provides fast access to the major functions of the Grundig. The remote works in all three of the Grundig’s modes: iPod dock, FM radio and DAB+ radio.

Twin speakers are embedded in the radio, although the quality of the audio output was a little flat, and even tweaking with the basic EQ on the Grundig couldn’t do much to bring it to life (NOTE: After publishing this review we were informed that the review unit was a pre-production model, and that with more tweaking the audio is expected to improve for the model that goes on sale. We will revisit this point when we obtain a production model).

Volume was also quite limited and tended to distort at the higher ranges, especially in DAB+ mode (which was annoyingly much quieter than FM radio mode, necessitating volume adjustment every time we switched between them). Fortunately, it does have a line-out, so you can plug it into a receiver and use external speakers instead. Plugging our test device into a pair of high quality speakers produced rich tones and a depth lacking in the integrated speakers.

The control system for the Grundig is appealingly simple. There’s nothing remarkable about any of the functions of the radio, but changing and tuning channels is quick, as is initial tuning and setup. You can quickly hop between iPod mode, FM radio and DAB, and the same controls function for all three modes. A simple but well-illuminated two-line display shows the current station or track on the first line, and any associated text on the second (such as the now-playing information on tracks).

It’s not a product that’s rich in features or produces particularly good audio quality, but the simplicity of the Grundig will no doubt find many fans. We never had to consult the manual to do anything on it, and setup was as simple as plugging it in and holding the ‘scan’ button down for a few seconds to perform a full scan.

Overall
Features
Value for money
Performance
Ease of Use
Reader Rating0 Votes
iPod dock and DAB+ radio in one; Easy to use; Neat remote
Audio is a little flat
3.4