Guitar Hero for Wii back in stores, and twice the fun! 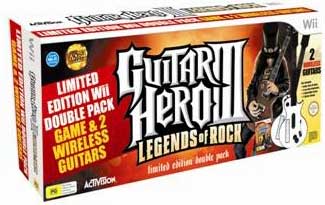 After being almost impossible to buy since before Christmas, the Nintendo Wii version of Guitar Hero III: Legends of Rock is back in stores nationwide.

Game makers Activision have today shipped a new version of the game, the Guitar Hero II: Legends of Rock Limited Wii Edition Double Pack. In the pack are 2 Gibson Les Paul guitar controllers, and the Wii game software, so you can cook up some multiplayer rock magic. The new edition has an RRP of $199.95.

The single guitar version of the game is still available, but there may still be some investigation required before you find a retailer with some in stock.

Guitar Hero for the PC

Also announced today is that on April 16, Activision are releasing a PC version of Guitar Hero III: Legends of Rock. The game will come with a wired X-Plorer guitar controller, and will retail for approximately $130.