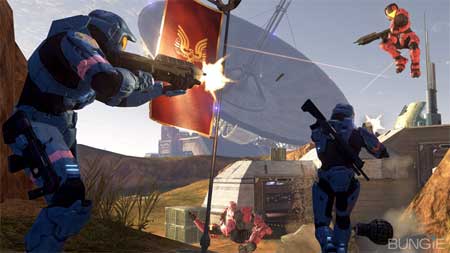 More than 7.3 million copies of Halo 3 have flown off store shelves worldwide, upwards of 500 million hours of frag-tacular online gameplay have been logged on Xbox LIVE and the Heroic Map Pack has been downloaded by 1 million plus gamers and counting. But it’s not over yet…

Microsoft and Bungie have announced that April 15 will mark the release of the next wave of Halo 3 downloadable content. Available exclusively on Xbox LIVE Marketplace for 800 Microsoft Points, the Legendary Map Pack will introduce three new maps to the title’s award-winning multiplayer experience, Ghost Town, Avalanche, and one map yet to be revealed. And with the addition of some exciting Forge options, fans can explore new ways to create and share their custom Halo 3 content.

Ghost Town is a battle-scarred maze of narrow passages and dangerous ruins outside the once-prosperous city of Voi. Collapsed ceilings and shell-battered buildings provide both valuable cover and deadly traps, as catwalks and stairways take the fight from claustrophobic ground combat to dizzying rooftop battles. Ghost Town is a mid-sized map ideal for Team Slayer games and smaller, objective types.

The second map, Avalanche, is a tribute to Sidewinder, a “Halo: Combat Evolved” fan-favorite. This massive, vehicle-oriented objective map adds a twist to its classic predecessor with all new interiors, dramatically reshaped exteriors and brand new vehicle variants. Take a ride and admire the visual variety from the cockpit of the retuned Hornet.

The third map to be included in the Legendary Pack has yet to be announced, but stay tuned to Bungie.net for full details on another returning classic… fans of smaller Slayer maps, it’s time to get excited.