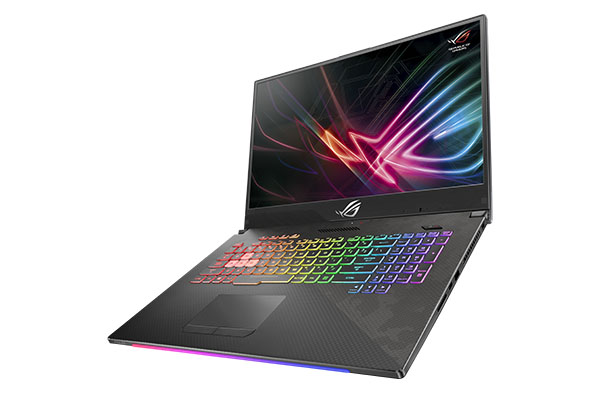 ROG says that the Zephyrus S (model GX531) is the “world’s slimmest gaming laptop”. It’s 15.75mm or less, yet it packs an Intel Core i7-8750H CPU. The CPU runs six cores with twelve threads. Graphics are handled by either an NVIDIA GeForce GTX 1070 Max-Q or GTX 1060 graphics unit.

Successful gaming is much about responsiveness and smooth, accurate motion as anything. The Zephyrus S features a 144 hertz frame rate, and a 3ms response time for the panel to provide just that.

The display is 15.6 inches, but a very narrow bezel surrounds it, so the computer is similar in size to one with a 14.2 inch screen.

The challenge for a high powered, compact computer is keeping things cool. The Zephyrus S incorporates ROG’s latest cooling technology. It’s called the Active Aerodynamic System. It uses 12 volt, 83 blade cooling fans. These apparently push through 22% more air than the norm for gaming computers. To transfer heat to the flow of air there are cooling pipes and 250 heatsink fins, some as thin as 0.1mm.

They could soon be clogged by dust, but ROG incorporates a system for flinging the dust out in a separate stream via centrifugal force.

The lid of the Zephyrus S is individually CNC milled from a single slab of aluminium for each computer in a five stage process. The total time taken in milling: more than 71 minutes. Each. ROG had the before-and-after aluminium there. It was clear that there’s a lot of work involved. I’d estimate that the finished lid was perhaps one eighth of the mass of the starting chunk of metal.

In use, the most surprising thing is the re-arranged keyboard. Instead of the ubiquitous touchpad in front of the keyboard, it’s at the right hand side. So the touchpad is available if you need it, but since most gamers use a gaming mouse, that gets it out of the way of the action.

It’s not only the Zephyrus S that squeezes a large display into a small chassis. We reported on the 15.6 inch Strix SCAR II a couple of months back. The new Strix SCAR II (model GL704) packs 17.3 inches of into a chassis that would normally hold a display. The trick is the narrow 7.05mm width of the bezel.

Despite the larger screen, this computer has the same 144 hertz refresh rate and 3ms response time as the Zephyrus S.

In fact, internally much of the same technology is used: the same processor, similar 802.11ac Wave 2 Wi-Fi and so on. An NVIDIA GeForce GTX 1060 handles the graphics. And the same new Amoury Crate software manages everything. But the Strix SCAR II adds a Mini Display Port socket (in addition to the HDMI), compatible G-SYNC monitors. And in addition to the M.2 NVMe SSD there’s room for an optional 1TB hybrid drive.

Both computers felt great under my fingers. The screens were big and bright and the colours strong. Clearly they’ve been optimised for speed rather than the deepest of black levels, but I doubt that any gamer would object to that.

What I liked best was how compact these computers are. Especially given the sizes of their screens. Gamers are going to have fun with these. If you’re any kind of heavy duty number cruncher, they’d probably be worth a close look from you too.

Thomas Bartlett attended the launch of the 2018 ASUS ROG range in Taipei as a guest of ASUS.