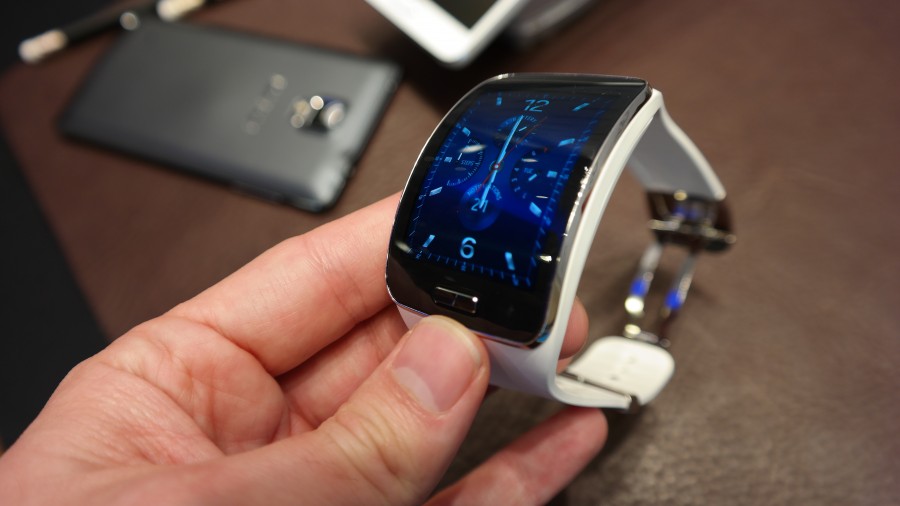 As the smartwatch market heats up, with a projected 212 million units shipped world wide by 2020, Samsung’s new Gear S comes with a range of features and technologies to help it stay ahead of the curve.

Speaking of curve, the Gear S builds on the popular shape of the Gear Fit, sporting a curved Super AMOLED screen, only this time it’s much larger with a 2 inch diagonal, and said to be Samsung’s most curved display yet.

The screen curves nicely around your wrist and is sized appropriately to make reading long text, viewing news feeds, reading emails or even tapping out an SMS message feel at home on your wrist.

While still based on the Tizen operating system, with a Google Wear version said to be in the works, the Gear S makes for a solid hardware foundation.

It’s quick and responsive, and the menus are logical and easy to navigate. The notifications screen is a simple swipe to the left, and you can access the different types of notifications by swiping up and down from there.

Swipe right to access the phones other functions including a music player, news feed, dictation, activity tracker and more. There are already app partners including Facebook and Evernote and Nike+ with more to come.

Style-wise are a number of different digital watch faces to choose from, and the watch pops out of its band making it easy to switch between sporty, daytime or evening band styles. Otherwise, the watches come in black and white case colours.

A fantastic ‘made for Australia’ feature is the integrated UV sensor, which can be seen on the face of the watch, on the opposite side as the light sensor. Tap your way to the UV screen to find the current ambient UV levels as well as a historical graph of UV readings.

The Gear S also features a heart rate monitor and accelerometer for sporty applications, and is IP67 rated meaning it can withstand being immersed in 1 meter of water for 30 minutes, along with dust and dirt resistance.

Unlike the Gear 2, the Gear S does not include a built in camera. When we asked Samsung about why, they simply said there was not enough room in the unit for a camera to fit.

The Gear S is also capable of ‘stand-alone’ functionality meaning that it doesn’t need to pair up with a Galaxy smartphone for some of its features.

It can take its own 3G SIM (in the form of the tiny nano-SIM variety) and can make and receive calls, transmit SMS messages and send and receive data. There was no indication if a 4G LTE version would be included at launch.

While Australian telcos are slow to provide multiple-SIMs-with-same-number packages, you can still divert your calls from your mobile to your Gear S to make the most of this feature.

The Gear S is also happy to pair with your mobile, and comes with both Bluetooth and Wi-Fi connectivity, along with 3G.

Pricing has not yet been announced but we can expect to see the Gear S on sale this year.

Valens Quinn travelled to the Samsung Unpacked event and IFA show in Berlin as a guest of Samsung Electronics Australia.