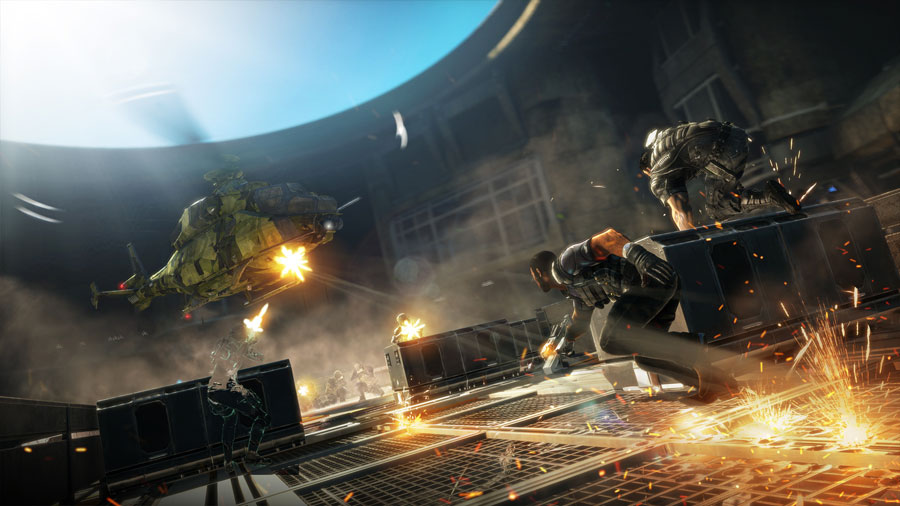 Created by Insomniac Games – developers of popular titles such as “Spyro: The Dragon,” “Ratchet and Clank” and “Resistance: Fall Of Man” – Fuse takes all of the best elements of those action-adventure titles and combines them into a cooperative adventure for up to four players. With a pedigree from those classic platform adventure titles, you can bet Insomniac has what it takes to make an enjoyable gaming experience and from what we’ve seen, Fuse is no different.

I won’t get into the basic premise of it as Insomniac’s Ted Price does a far better job in the interview below, but what I will do is give you my impressions of it, from the three campaign levels and few Echelon maps we got to play off the most recent build.

The biggest selling point of Fuse is being able to play as each of the four swappable characters in the same game session. Called a “leap,” this feature is what makes it different from other cooperative games, as you’re able to leap into any available character at any time to mix it up, as long as they’re not currently occupied by another human player.

Our session revealed that the biggest factor making each game different is the unique alien-based weapons, which the players acquire early on in the campaign.

More than just your regular gun, these weapons do things like throw up an energy gun shield so your team can fire safely in the open then as they reload, followed by discharging the shield in a force wave, and wiping out the room in front of you, with these elements working well for team-based play.

When moments like that pay off, it’s quite exhilarating and they happen quite often thanks to Fuse being built from the ground up with co-op in mind.

The four characters are based of RPG archetypes which is not unusual for these games, so we have a weapon-heavy tank, a crowd control expert, a healer and a long range character to balance out the team.

With these options, there is always a way to create a new strategy for every battle.

The three levels we played included a variety of mission tasks, from saving trapped scientists, to fighting a full on mecha-robot with energy lasso shooters that can get you in a real bind. Throughout the missions, the main objective is that your squad is trying to fix the trouble an alien substance has caused, ironically, with the very weapons this alien technology has created.

This is where the game really shows it’s personality, with the unique Fuse weapons that can do anything from shooting energy bullets, to creating a chain of black holes that suck your enemies into another dimension.

The combat can be similar to other third-person cover shooters, but with the flare and fun of Insomniac’s creative Ratchet and Clank-like weapons and a nice level up skill system, all of which makes you stronger as time wears on.

Throughout play, we found our mechanics were tight, and our character always got to the cover he aimed for. Even for first time users, the controls were easy to pick up and play, and with the title available on both the Xbox 360 and PlayStation 3, there will be a choice of system for everyone with controls anyone can be comfortable with.

The AI was a bit of a mixed bag, and we usually had to revive our co-op partner when we needed it. Sometimes, however, it just stood in the line of fire spraying and praying, so the jury isn’t completely out on this yet.

That said, it was an early build, and this game is made for co-operative play, so even when Insomniac fixes the bugs, hopefully you wont need to play with the AI often thanks to online play or even having a few buddies over your place for a split screen session, which is one area where this game just shines.

Echelon mode is the equivalent of a quick play game in Fuse, a survival mode with waves of enemies and randomly spawned objectives. Here you can earn giant gold bars to buy team upgrades, letting you survive just that little bit longer and see how long you can last against hordes of enemies with your co-op partners.

This mode offers some intense combat which proves to be very challenging, a refreshing take in this age of hand-holding games. We suspect it will take quite a few tries to go the distance in Echelon with the skill of your teammates being the key to victory.

All in all, we’re looking forward to seeing Fuse hit shelves, with the game proving to be quite enjoyable. It should definitely be on the radar for any multiplayer gamer, so look for it in the next few weeks.