Hands-on with the Asus Transformer Prime 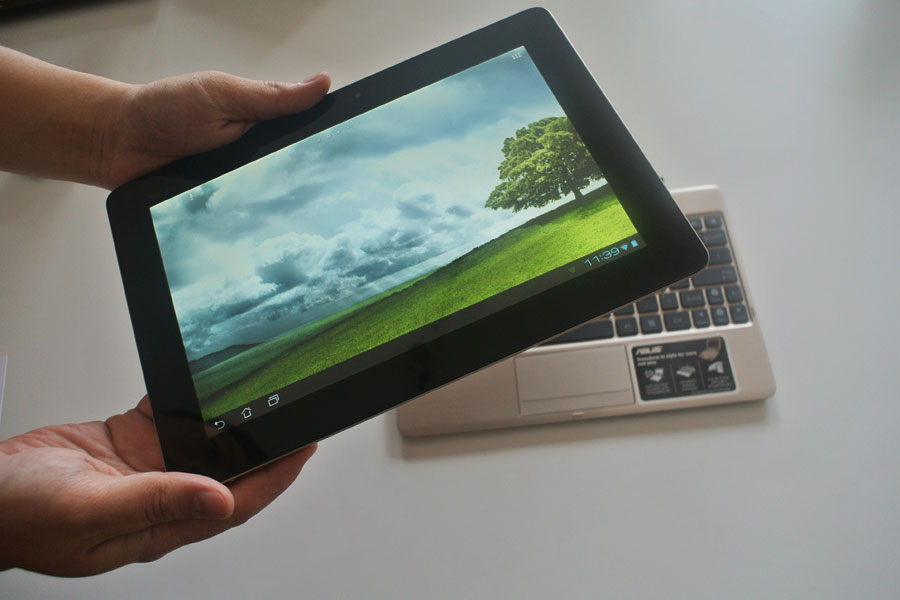 When Asus released the Transformer tablet last year, we found ourselves loving the keyboard-equipped slate, as it was one of the more unique devices we’d seen all year. With the Prime, Asus has made some improvements, and in our quick hands-on, we think it might be love at first sight.

Taking design cues from the Asus Zenbook, the Transformer Prime is a hybrid device, bearing more than a passing resemblance to both a slick 10.1 inch tablet and a thin ultrabook.

Like the original Transformer, the Prime model arrives in two parts: the tablet and the keyboard dock. The casing on each of these has been changed, with each part now encased in aluminium, feeling sturdy and excellent in the hands. It’s easy to notice just how thin the Transformer Prime’s tablet section is, reminding us very much of another metal tablet we’ve had lots of experience with. At 8.3mm, the Prime manages to be even thinner than the iPad 2 (8.8mm), although only in the tablet section.

The screen looks to be one of quality, the IPS panel from the first Transformer upgraded to a new “Super IPS” model, which Asus says provides brighter colours in sunlight, something we didn’t get to test with the overcast and rainy day outside.

Under the hood, Asus has updated the dual-core Tegra 2 processor the one of the new quad-core Tegra 3 processors, making it one of the fastest tablets currently available and the only quad-core tablet released today.

The camera has been updated too, bringing the rear camera to 8 megapixels with 1080p Full HD video capture, while the front camera is still t 1.2 megapixels, which should be enough for video conferencing needs.

Google’s latest version of Android was also present here, with Ice Cream Sandwich making its debut on the first new tablet of the year.

A microHDMI port is also present on the tablet section, as is a combined headphone and microphone port, and a microSD card slot – useful if you want to expand the memory.

As we’ve mentioned before, the ever important keyboard dock is now a part of the package and no longer an optional accessory that you could purchase on the side. The new dock is thinner, much more stylised – like the bottom part of the Asus ZenBook – and features a USB 2.0 port and full sized SD card slot, able to read files and offer expandable storage.

The battery seems to have had a huge improvement, though, with the tablet section now offering 12 hours of life, and the dock adding an extra 6 hours of life.

That’s a pretty impressive life, especially seeing as that would make the Transformer last a full flight from Sydney to Los Angeles, something few laptops or tablets can do without an extra battery pack.

Sadly for us, Asus didn’t leave us one to have an extended play with, but said we’d be getting one shortly, so expect a full review online in the next few weeks.