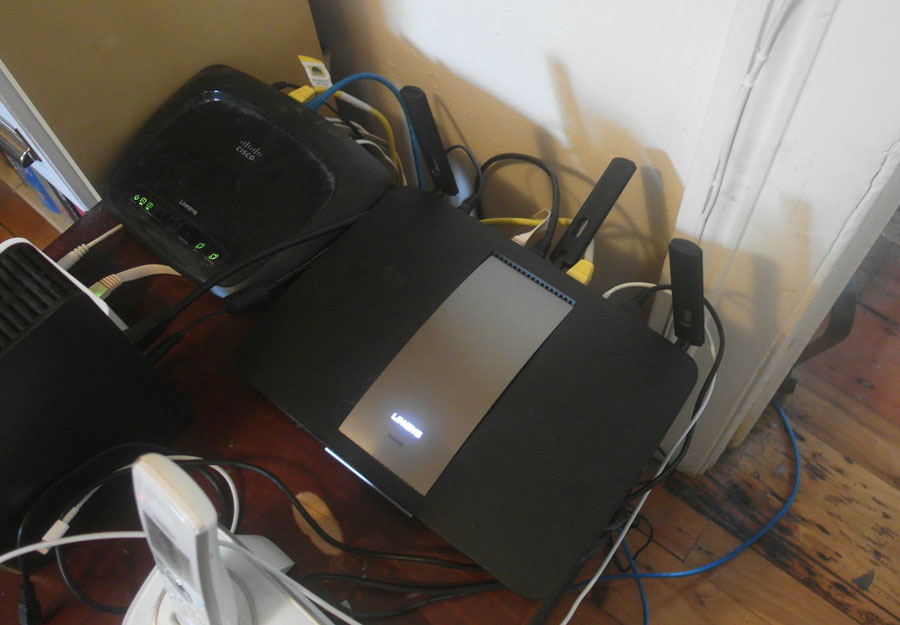 Linksys may not have been first in Australia with an 802.11ac router, but the Belkin-owned company now has something ready. So is it any good?

Fast forward several months and here we are with a router that not only boasts some of those uber-high wireless AC speeds, but also Gigabit Ethernet ports, an easy to use and view interface, and three external antennas designed to make performance matter.

Design-wise, Linksys won’t really win any awards here from us, as it hasn’t changed much from the routers we were seeing from the company before Belkin brought the brand out.

They still appear flat and yet slightly ovular, though there’s a softened and raised semi-circle bump on the top, which means you can’t easily put anything on top, for fear that it’ll topple over when the flat surface connects with the raised middle. Small things like hard drive can be placed on the flat ends, mind you, but that’s about it.

It’s not space-friendly design, that’s for sure, unless you plan on mounting it to your wall, which is one thing this model supports.

Linksys has also included something else that interferes with space slightly, and that’s a set of external antennas, and while Netgear, D-Link, and Apple seem to be about pushing their antennas inside the design lately, Linksys is expanding out even more, including three external antennas taking advantage of “dipole” technology.

We had to do our research on this one, and honestly, we really wish Linksys would include some documentation or an online guide about how to make these work better in your home, because it’s all well and good including a neat technology designed to expand the performance of your WiFi antennas, but not telling anyone how to place them can create one frustrating experience.

Dipole antennas are used in lots of places, though, including in the traditional rabbit ear antennas used in TVs, but here in the Linksys router, we would have loved some guidance for getting optimal reception.

Credit does go to Linksys for the interface, though, because while router interfaces are normally a pretty mundane usability experience, with low-end looks, lots of form fields, and a big ol’ clunky save button or two, Linksys has made the EA6900 adopt its cloud interface design, which gives everything a nice blue background, big easy to read fonts, and some hints about what things do that make everything seem easy.

Except the antenna positioning. That seems to be a do it yourself and experiment thing.

Regardless, this browser-based interface can also be linked up with a Linksys account, and then controlled not just while you’re not at home, but also through your smartphone or tablet, which means you can see who is on your network while you’re working late, and kick them off accordingly if they should now be in bed.

Using it through your portable device can make the router just that much easier to use and stay on top of what it’s doing, and there are even apps which can link up with this system.

You will want more than just a smartphone to set it up, mind you, as the Linksys router seems to have issues with mobile browsers for the initial setup, but at least your optical-drive-less Ultrabook or tablet won’t require a start-up CD, which is included, but unnecessary to get the router up and running.

For the most part, the three antenna router is capable of some decent connectivity options, with two USB connections able to charge devices and provide network assisted storage if you don’t have one of those network-connected hard drives, and both the 2.4GHz an 5GHz bandwidth settings for dividing the 802.11a/b/g/n and 802.11n/ac wireless networks.

Over in the 2.4GHz spectrum, you’ll find the older standards supported, and these work a treat, but it’s in the 5GHz area where we found some problems, which itself is an issue because that’s the only place where the 802.11ac networks can run

From the testing we’ve done, the EA6900 doesn’t seem to operate at peak capacity at 5GHz, with the 802.11n-friendly 2.4GHz band outperforming it considerably in both reach and speed.

Not many people have an 802.11ac compliant computer, but over in smartphones, that’s become a different story, so to test the issues, we grabbed an HTC One, which supports 802.11ac, and allowed us to quickly jump the networks and test them accordingly from the same place: upstairs in the middle of the room, which is basically immediately above where we positioned the Linksys EA6900.

Testing vertically, this router seems to struggle, producing not just slower speeds, but also considerably less power over 802.11ac (both shown in the image above). We tested later with an 802.11ac USB dongle on a couple of laptops and found similar issues, requiring us to connect to the 802.11n network to make everything better.

Interestingly, the Linksys fares decently across horizontal planes, and we found speeds of as much as 200Mbps were possible when on the same level as the router, which is good for people in homes or offices without multiple levels, but a little problematic if you have a set of stairs.

The price is a little heavy too, especially with no ADSL2+ modem built into the unit, which is likely due to Linksys making most of its gear for the cable-friendly American market.

In Australia, though, you’ll need a modem connecting to this router, which not only takes up more space, but also one of the four wired Gigabit Ethernet ports, both of which can be frustrating.

We’ve heard the argument that the AC1900 chip Linksys is using here does cost a little more than the AC1750 of the others, but without a modem inside, and some questionable performance bugs in the 5GHz band, the $350 tag might be hard for some to justify.