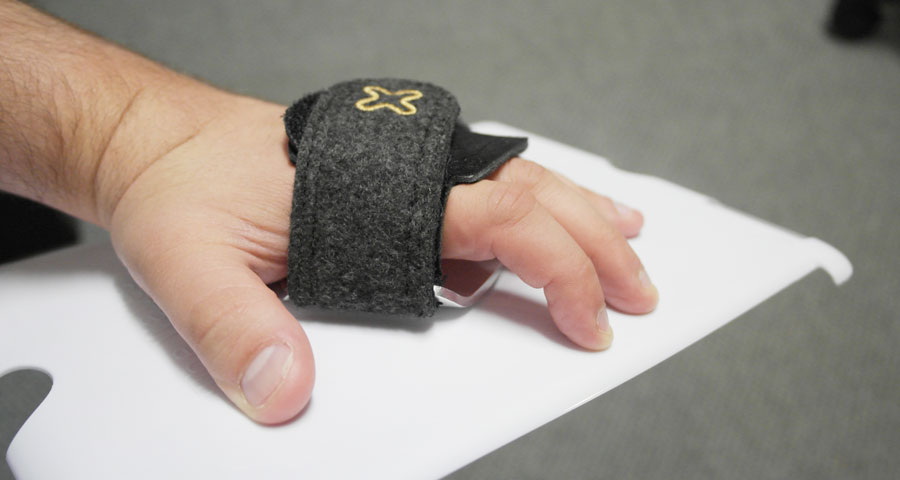 Science fiction has long dictated that we would eventually have computers attached to our bodies, strapped to our wrists and hands and able to perform commands without needing to sit down. And now you can do just that with an Australian-made accessory for the iPad.

Designed in Melbourne, the Wallee Hand Strap actually consists of two parts: the Wallee mountable case and a handstrap made up of an aluminium plate and wool felt strap. Together, these two parts lock into place to provide an easy way to hold the iPad 2 with one hand.

In a way, we’re reminded of the so-called wearable computers that have been touted for the past decade, devices that could be strapped to the arm and used in environments that have minimal room and require constant movement. These wearable computers have mostly existed for industry and military purposes, and feature compact touchscreen computers with WiFi, GPS, and a lighter version of Windows. They also generally have prices between $1500 and $4000 US dollars.

The Wallee Hand Strap is a fair bit cheaper than these, with the Hand Strap fetching $20 and the Wallee case $40. You will need an iPad, though, so unless you already own one, factor that into the cost.

Interestingly, the creators of Wallee have actually envisioned even more creative uses than just a wearable computer, such as turning the iPad 2 into a giant wristwatch, a concept that’s more a joke than something usable. We probably wouldn’t wear a $500 9.7 inch computer around on our wrist, but that’s just us.

What we did notice is the Wallee Hand Strap made holding the iPad 2 easier, and we could now grasp Apple’s reasonably slippery tablet with one hand. If we needed to show the iPad 2 to someone, this was now much easier. If we had to take notes, this was easier, too.

While we don’t think the Wallee will replace your wristwatch any time soon – too cumbersome, no matter how big your arm is – it could make it easier to demonstrate things on the iPad, which makes it quite a useful accessory.