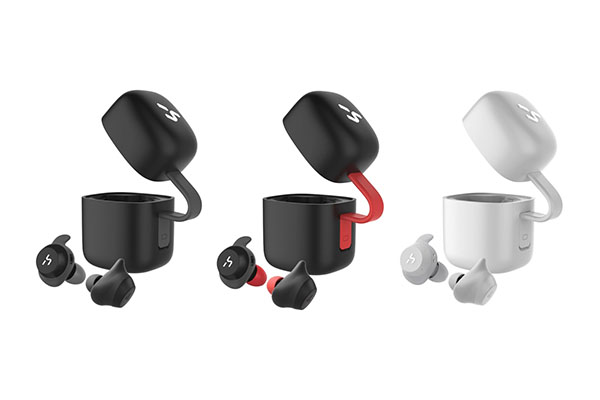 One of the fun things about this job is getting to see the inventiveness of product makers. I’m often whinging about the fiddly Micro-B USB connections used to charge Bluetooth earphones. Well, the Havit G1W True Wireless Sports Headphones can charge wirelessly.

But the “True Wireless” in the name doesn’t refer to that. It denotes that the earbuds aren’t tethered together by a length of cable. The Havit G1W earphones also communicate with each other wirelessly.

As we’ve seen before, this separate-bud arrangement comes with a charge case. That is, you pop the buds in the case both to hold them and to charge them up from its own built-in battery. The case divides more or less in two, the two halves secured by magnets and 40mm of flat cable. Each of the buds has its own sculpted resting place within. Place it properly, and two contacts on each align with the charging contacts in the case.

The battery in each bud has a 60mAh capacity. The capacity of the case is 720mAh. That means that both buds can be recharged six times. Havit says that the play time for the buds alone is 3.5 hours at medium volume, and 21 hours with the charging case.

They also do hands-free phone work as well. Havit rates talk time at 4.5 hours. It puts standby time at 80 hours.

The buds come with three sizes of silicone tips and three sizes of wings to help secure them in your ears. Both are nice and soft, and thus gentle on your ears. I found that they locked into my ears quite well, achieving a decent acoustic seal.

The Havit G1W earphones use Bluetooth version 5.0. They also use the AAC codec, so they ought to provide slightly better sound quality with Apple devices. I used Android for this review. You also have the option of going “mono”. That is, you can have just one paired to your phone and leave the other free. I suppose that would be primarily for hands-free phone use.

The other “wireless” capability is wireless charging. Not the earphones, but the earphone case. Yes, it has the usual Micro-B USB socket, but it can charge on any Qi wireless charging pad. I used the Belkin Boost Up wireless charging pad, and sure enough, when I put the case on it it’s little light came on, and the case started charging. You can tell because the backlit Havit logo on the top starts slowly pulsing. When it’s charged, that goes out. When the case is charging the earbuds, it maintains a steady glow. You know they are charged with the light goes out.

Now let’s be careful here for a moment. There are three closely related models: the Havit G1, the Havit G1W and the Havit G1C. This review concerns the Havit G1W. The G1W is available (as I write, but it probably depends on the exchange rate) for $118.74 direct from Havit in Hong Kong. The G1 is identical, except that it’s cheaper and doesn’t support wireless charging. It costs $105.19 from Havit, but I see that it’s also available from amazon.com.au for $69.99. Finally, the G1C is the same as the Havit G1W but includes a Qi wireless charging pad. That one costs $131.49 direct from Havit. In all cases shipping is free, but extra cost express delivery is available.

The earbuds worked reliably, and the only wrinkle I had in operation was when I didn’t seat one of them properly in the case, so it didn’t charge. After that I took extra care, giving them a little tap on placing them.

The sound they produce is moderately bright without being harsh. I had no trouble turning them up to satisfying levels. Havit says that they use a 5.8mm titanium driver.

There one significant limitation was in the bass. It simply wasn’t very extended, with little below about 40 hertz. Even above that it was somewhat recessed, so music tended to lack body. That apart, they were clear and nicely musical.

So the Havit G1W earbuds may not be ideal for bass hounds, but it’s worth weighing that off against the otherwise decent sound and the surprisingly low price.

Plus, my Qi charging pad spends most of its time with nothing on it other than dust. It’s nice to get more use from it, and even nicer not fiddling with Micro-B USB cables and plugs.