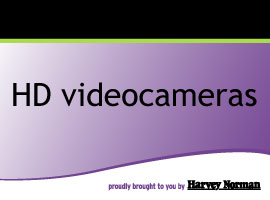 It may be surprising, but quite a few major Hollywood movies over the past few years (Collateral, Once Upon a Time in Mexico, Sin City), and any number of high-quality TV series, are recorded in video, not film.

But not any old video: in high definition video. This can give results remarkably similar to film, yet offer a great deal of flexibility in the production process, and save a lot of money in equipment and media costs.

And now high definition video is becoming available at prices affordable to you and I.

Professional-level HD videocameras still cost in the tens of thousands of dollars, but convenient high definition camcorders from several major brands have now appeared, with prices starting around $2,000 depending on the features and format you want.

As with all new technology, there are choices to be made. Your first choice is the same as with existing standard definition camcorders: do you want to record to tape, or to something else?

And as with existing standard definition camcorders, your choice should be determined by what you want to do with your video. The older technology, based on the MiniDV tape, is still the best for high-quality SD video. You can download the video to your computer, or even to many DVD recorders using the i.Link connection. The DV format used on these tapes is relatively easy to edit.

The SD video cameras that use DVDs or hard disks to record can still download their video to computers, but not to DVD recorders, because instead of the DV format, they use the same MPEG2 format that DVDs use. Editing on a computer is also a bit harder because of the MPEG2 format.

However, with the much greater storage requirements required for high definition video (which, remember, has as many as five times more pixels than standard definition), two different formats were developed.