HDR in photography – what is it? 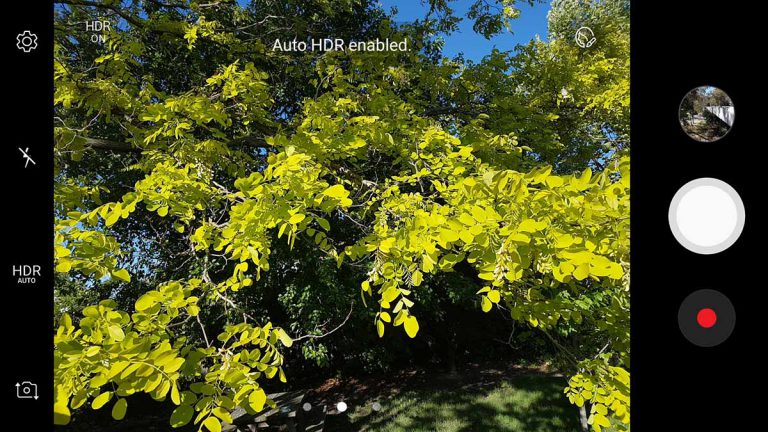 When we’re writing about cameras and, more specifically, the cameras in phones, we often mentioned HDR. So what is it? What does it do? What use is it?

HDR stands for High Dynamic Range. Dynamic range is kind of like the maximum dimension of something. In this case, light. The range is the difference, or more properly the ratio, between the maximum brightness and the lowest brightness. High Dynamic Range means that the end points between maximum and minimum are stretched to encompass a greater range of graduations.

In the consumer space, there are two kinds of HDR. In new model TVs HDR means that the TV accommodates the new HDR signals, and those signals are based on whites being brighter than with older TV technology, and blacks being darker. HDR TVs which have panels no better than previous years’ models might still accommodate the signal, but simply limit, or “crush” both ends of the brightness scale when displaying pictures. (As TV technology improves into the future, we’ll see more and more of that range.)

In photography, though, the point of HDR is to get more useful picture information into the maximum brightness range available from our displays. It can only capture so much brightness and so much darkness. The image is manipulated so that the details that would normally be largely invisible due to gloom are brightened so that they become visible.

All that is kind of theoretical, so let’s look at some actual pictures. All were taken with a Samsung Galaxy S7.

I went for some strolls in Canberra’s Parliamentary Triangle this morning, on a crisp and exceeding beautiful Spring day. It rained yesterday, clearing atmospheric haze. Here is a picture looking more or less north across Lake Burley Griffin. The foreground is heavily shadowed and as a result, there’s not much detail in it as it is crushed into the blacks at the bottom end of the range.

And here’s the same scene shot with HDR on. The foreground plants are no longer indistinct in the murk, but themselves clearly defined and with a great deal of detail. In this shot, the HDR has lightened the blue of the sky and water noticable, but kept the bright green of the tree leaves around the same.

Now let’s zoom in – crop rather than scale – down to the base of the tree at the left and look at the two shots side by side. To the left is the standard shot. To the right, the HDR one. If you’re at all interested in the texture of the bark, the latter is the one to use. But is it a worthwhile trade-off given the resulting change in the colour of the water?

Less dramatic, but a more common kind of result, is where it’s not all light and dark, but that there is light, dark and a lot of intermediate brightness. Here’s the National Portrait Gallery, with the southern face well shaded from the northern sun. Just about everything is clear enough, at least, the areas of interest. The small area to the bottom right looks murky, but there’s nothing much there.

But with HDR on there are changes. Some improvements, but also some loss of impact. Again the sky is softened a little with HDR, and the orange of the eves lightened ever so slightly, so the whole thing pops a little less. On the other hand, the still water pool at the base of the south face is clearer and more detailed, less likely to be overlooked.

Should you use HDR?

Is HDR “better”? Not really. It’s just different. I leave HDR on the “Auto” setting on my phone because I find it useful when just happy snapping. But that’s because I’ve experimented and found that the HDR mode in most circumstances offers just a mild boost in the darker areas, and doesn’t do too much visible damage to most pictures. With a different camera I’d take a few comparison photos to see whether the results are pleasing before deciding.

But for more deliberate photo taking, you may want it on, or you may want it off, depending on the what you want the picture for. I note that the Samsung phone’s “Pro” photo mode doesn’t even have a HDR option.

If you’re documenting something, then having it on will likely provide a photo with more useful information in it. But you may want an artistic effect with striking contrasts between foreground objects and the background; silhouettes, even. Deeper moods may be softened, against your intentions, with HDR.

And sometimes, HDR like any automatic process can be tricked by circumstances into wrecking a shot, washing out great swathes of the picture into a low contrast mess in order to accommodate small areas of extreme brightness and deep black.

Be thoughtful in its use.