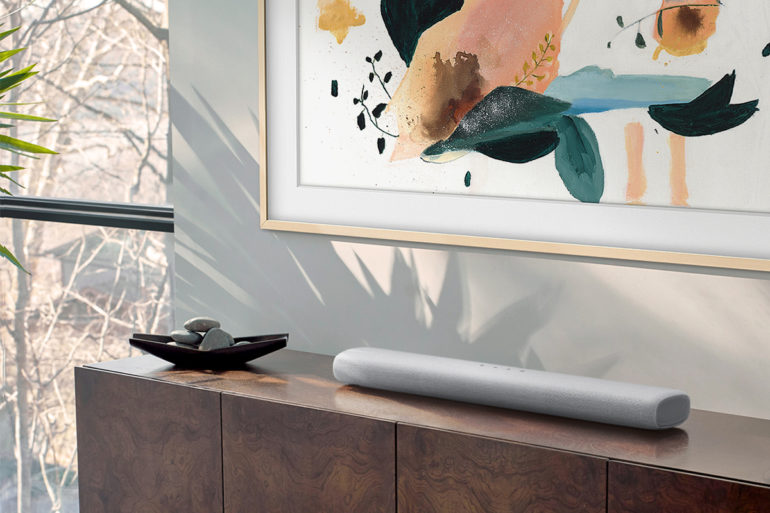 When you choose to buy a Samsung soundbar, you can really hear the difference. Samsung has a huge range of soundbars to suit just about any television, and any room – even if that ‘room’ is outside in your party area.

You get easy set up, amazing sound, and stylish design that fits your space. In fact, you should even consider a Samsung soundbar for music and other audio, without a TV attached. Let’s meet the range!

The Q Series is Samsung’s soundbar flagship range, with designs and features that complement the top TVs. Paired with Samsung Neo QLED and QLED televisions, Q Series soundbars synchronise with speakers in the TV to amplify effects and provide new levels of acoustic immersion.

To enhance Dolby Atmos content, Q Series soundbars feature upward-firing speakers that use your ceiling and walls to bounce sound for a full hemispherical audio surround experience. Options start with 3.1.2 channel models and go up to 11.1.4 channels in the flagship Q950A, which includes rear satellite speakers.

To match your expectations, Q Series soundbars are made of high-end premium materials and feature cutting-edge styling. Set yours up to blend effortlessly under your Samsung Q Series TV, or choose to make your soundbar part of your decor, with its own pride-of-place spot on your cabinet, or make a statement by wall-mounting.

If you need a soundbar that won’t take up too much space, but you don’t want to compromise on sound, then the S Series is for you. These all-in-one soundbars work their magic without the need for a separate subwoofer, but you still get chunky bass thanks to woofers and ports built into the soundbar itself. Add a pair of satellite rear speakers and an S Series soundbar can be the perfect fit for a minimalist space, and looks great wall-mounted as well. If you’re lucky enough to own the amazing Samsung Frame TV, then there’s an S Series soundbar designed to complement it perfectly.

The S Series is also designed to work without an attached TV, as the central hub of your home music experience. Whether that’s as a super-minimalist ‘hi-fi’ in the living room, or using Samsung’s connectivity options to make it part of a multiroom audio setup, the choice is yours! There’s even an outdoor model that matches with the Samsung Terrace TV. It has weather resistance so it can be part of your awesome outside sports and movie night install.

Looking for your first soundbar, or have a secondary space you want to get set up, such as an apartment or holiday home? The A Series offers excellent value and super quick and easy set up for any TV – just plug and play!

Ideal for smaller rooms or your inner-city flat, these soundbars give great sound without disturbing the neighbours (or your housemates), and come with a separate subwoofer for great bass. What’s great about a soundbar for a smaller space is that it can work as your main music speaker too when the TV is off – that means you don’t need to take up a shelf with a hi-fi stereo, or a Bluetooth speaker – important when space is at a premium!

How to choose which Samsung soundbar is right for you

With so many amazing soundbars to choose from, it’s sometimes tricky to work out which one is exactly right for you. Sure, you can stick to a budget or look for certain tech features, but that might not narrow down the choice that much! Instead, you can think about how the soundbar of your dreams is going to fit into your life.

When it comes to choosing a soundbar’s style, take a look at your current audiovisual set up. Do you have everything tidied away in a closing cabinet? Or sitting proud on a console? Perhaps you’ve taken the time to wall-mount your TV and run all the cables in behind the plaster for that seamless look. There’s a Samsung soundbar to suit each of those situations.

Then there’s your other tech. Do you have lots of boxes that you need to plug in? Say, games console, maybe an old-school turntable, or even a PC. Your soundbar can handle all those connections and pass them up to your TV, or you can get your TV to send audio to your soundbar – the choice is yours.

Suited to your space

If you have your TV in a really large room, you’ll want a powerful soundbar from the S or Q Series. Consider getting one with a separate subwoofer and wireless surround speakers, for a cinematic experience.

Speaking of home cinema, if you already have a lot of top-end tech, and put a lot of stead in quality audio, then there’s no compromise – the Q Series is for you. The higher-end models include multiple discrete drivers for bass, mids, and highs, for sophisticated sound reproduction that will live up to your standards.

If you use a dedicated media room, definitely grab a soundbar that has surround satellite speakers too. You’ll get the most out of Dolby Atmos and DTS:X the more individual speakers you have (especially the upward-firing drivers on the main soundbar and rear satellites).

Remember that a soundbar can also work as a music machine and as the hub of a multiroom audio setup. In fact, if you already have a multiroom set of speakers and are looking to round it out in the living room, then a Q or S Series soundbar should integrate with your existing system. Be sure to check compatibility, but if you have Samsung stuff, it integrates without fuss.

As for the A Series, well that range of soundbars is perfect as starter kit, or for your first flat. No need to struggle along with a cheap TV’s sound – just plug and play an A Series!

Finally, a special mention for Samsung’s outdoor soundbars in the S Series. These are designed to match beautifully with a Samsung Terrace TV, but they’re also ideal for bringing the party sound to any sheltered area outdoors (with mains power!).

As a form-factor, soundbars have been around for a while now, but that old bias to dedicated ‘loudspeakers’ still holds – which is why there are a few myths about soundbars that are worth busting.

Well, for a start many models come with a dedicated subwoofer, making them as bass-capable as any similarly priced surround speaker system!

But more than that, the soundbar itself includes dedicated bass drivers and specially designed bass ports on the rear of the bar. That means even without a subwoofer, a soundbar can bring the bass. And all-in-one models from the S Series are designed to pound out the beats without needing a separate sub.

Again, Q and S Series soundbar models are available with surround satellite speakers every bit as capable as those in a ‘traditional’ 5.1 or 7.1 surround system. But Samsung’s soundbars also include clever engineering to ‘bounce’ audio around your space to create a surround sound experience without the need for satellites.

Models that support Dolby Atmos include upward-firing drivers on the soundbar that reflect audio off your ceiling and walls to create a hemispherical surround experience. And then there’s Samsung’s Object Tracking Sound, where a Q Series soundbar works with a compatible Samsung Neo QLED or QLED TV to precisely position audio for objects (be they cars or characters) moving across the screen.

For bigger rooms, satellite speakers provide a boost in power and immersion for Q series soundbars, and include additional upward-firing drivers for next-generation surround.

3. Myth: Soundbars are just for your TV

The design of a soundbar makes it ideal for tucking in under a TV if you want that ultra-minimalist look without compromising on sound. But you don’t have to use your soundbar with a TV. Samsung soundbars have additional inputs for old-school audio devices like a CD player, and also come with Wi-Fi and Bluetooth connectivity so you can use them wirelessly with your mobile device or computer.

And if you integrate your soundbar into your smart home with Google or Amazon Alexa, you can get it to stream music from online, with a simple voice command.

4. Myth: Soundbars are just for movies and TV shows

One of the best-kept secrets about soundbars is that they make an ideal speaker for watching sport. Safe from… spirited barracking… at the front of the room, they nevertheless give you that big open audio feeling of really being there. Integrate an outdoor soundbar model into your back patio, and crank it up for the grand final for the best the weekend can give!