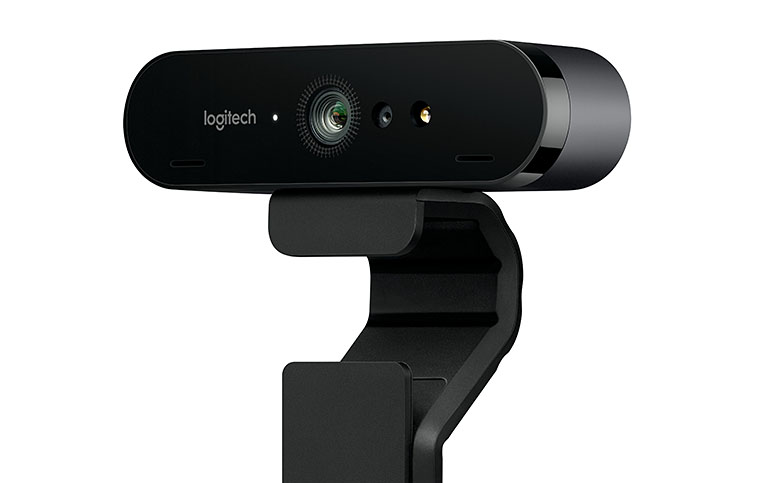 Logitech is well known for its computer peripherals: keyboards, mouses, PC games controllers, speakers and headphones, remote controls and, of course, webcams. Strangely, in a world where most new phone models can support full 4K video, webcams have tended to lag behind in resolution and performance. With the Logitech BRIO 4K Pro Webcam, Logitech aims to fix that.

In fact, it not only adds pixels, as the name implies, it adds wavelengths, which means it will work with Windows Hello, and dynamic range for improved clarity in a wider range of conditions.

That’s fine for webcam use, but a UHD mode would be useful as well because then it would match UHD TVs, instead of having to be scaled slightly to fit.

The camera connects to a computer via USB, and you’ll need a USB 3.0 port or better to handle the data flow if you’re using the 4K mode.

Adding wavelengths? With Windows 10 Microsoft added a face recognition feature for automatic logon to Windows Hello. But it requires a suitable camera, and so far there haven’t been many of them around. One of the required features is the ability to work in the infrared (ie. with longer wavelengths than visible light) so that even at very low light levels the recognition will work.

I’ve reviewed a bunch of quality recent model notebooks and none of them have supported it. But the Logitech BRIO 4K Pro does.

Incidentally, the BRIO also works with Macs, although I’m not sure if the infrared function offers anything there.

Logitech says that it also supports high dynamic range video capture using its “RightLight 3” system. It offers a standard field of view of 90 degrees (since you’re normally up pretty close to a webcam, a wide FOV is needed), but can also be narrowed to 78 degrees or even 65 degrees. It’s unclear if this is a hardware or software adjustment. By hardware I mean some kind of optical zoom, and for software simple cropping would do the trick. Apparently this feature is available “with optional software download” so I figure it’s software.

Worried about bad actors taking over your webcam to spy on you? The Brio features an “External privacy shutter” which sounds promising. It ought to be more sightly than sticking a piece of masking tape over a lens.

There are also two built in microphones with noise cancellation.

I’ve been using a Logitech C930 webcam on my desktop for a couple of years, and it’s certainly been reliable and its microphones have worked well for Skyping and such.

UPDATE (a few minutes later): Logitech confirm that the price is $379.95 in Australia and will be updating the erroneous has corrected the prices shown in places on its website.