Hells Kitchen: The Game – just in case you’re not getting enough Ramsay in your media diet 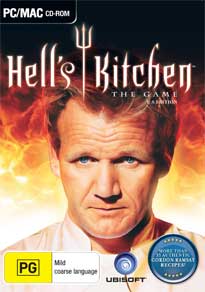 Ubisoft will release Hell’s Kitchen: The Game on Nintendo DS, PC and Mac in September and on Wii in November 2008.

Developed by Ludia, Hell’s Kitchen: The Game is based on the hit television program featuring world-renowned Chef Gordon Ramsay. The game will allow players to experience the show’s high-pressure kitchen and dining room challenges as a faithfully rendered 3D Chef Ramsay watches their every move.

“I had a great time doing the voice for my own animation,” said Gordon Ramsay. “Being in a videogame is a new experience for me and I’m very pleased with the results.

After executing the three phases of an order – preparation, cooking and service – Chef Gordon Ramsay will score each meal. As they progress through the game, players will be rewarded with access to recipes from Chef Ramsay’s own repertoire.

Does the game let Ramsay be Ramsay?

Does he let fly with the F word? Yes, but it is beeped out. Other than that he constantly berates and name calls, and built into the game is a tolerance meter, which builds as Ramsay becomes angrier. If it reaches its limit then Ramsay basically cracks it and closes down the kitchen.