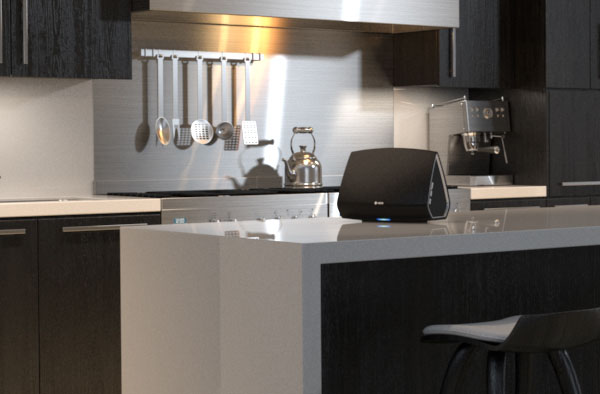 The Heos multi-room speaker system uses in part, Australian developed technology. Multi-room? Well, you need to test two speakers for that, so I took a look at its Heos 5 HS2 and the Heos 1 HS2.

At launch a few years ago when Heos a bunch of us writers and reviewers were taken to its Sydney offices where its advanced wireless technology without a. It had partnered with Japanese high fidelity company Denon.

One of the then selling points at the time was no audio compression at CD digital quality. The HS2 series now handles high-resolution audio, wirelessly, at full quality.

This review is for its multi-room speakers. There is also a soundbar, amp and pre-amp to which you can add your speakers. A lot of Denon and Marantz gear also supports the multi-room system.

The Heos 5 HS2 is second from the top in the lineup. Priced at $649 it features four power amplifiers driving two tweeters and two mid-woofers. A passive radiator supplements bass. Vaguely wedge-shaped it stands 210mm tall and nearly 300mm wide.

It connects via Wi-Fi AC dual band or an Ethernet port. There’s also a USB and a 3.5mm analogue input.

The Heos 1 ($299) is much smaller, standing 190mm tall and less than 130mm across the base in any direction. It has one tweeter, one mid-woofer, two Class D amplifiers, no passive radiator and the same connectivity as the Heos 5. With both, you can buy a matched pair for stereo 2.0.

Sources – what music can they play?

Pretty much anything. The app offers music from online services including Spotify, TuneIn, SoundCloud, TIDAL, Deezer, and iHeartRADIO. I used Spotify (premium subscription to use Spotify Connect). It will also stream music from DLNA network resources and your phone.

That’s useful just for a basic system with two speakers, but what if you have a recent model Denon home theatre receiver as well? Well, pretty much anything plugged into it can be sent anywhere in the house. Playing vinyl? Wherever you have a speaker, you have that music.

And as if that’s not enough, here’s something that’s decidedly unusual. You can enable music sharing on your phone within the app, and then any other phone on your network can play the music from your phone to a speaker or group of them.

Finally, the system supports all manner of digital music formats. It’s not just compressed formats like AAC, MP3 and WMA. It also supports high-resolution uncompressed audio in WAV, Apple Lossless and FLAC formats up to 24 bits of resolution and 192kHz sampling. Oh, plus Direct Stream Digital at both regular and double speeds. That’s a format beloved by a subset of audiophiles.

Finally, yes, they are each Bluetooth speakers as well. When it comes to versatility, this system is the master.

Heos was relatively early into this multiroom space and came up with a unique way of connecting its speakers to the wireless network. You install the app on your phone, and then you plug your phone vai 3.5mm cable provided  into the speaker

iPhone users and those without  a headphone socket can use a headphone adaptor. I tested on both an iPhone 8 and a Google Pixel 2. Just give permissions for the app to access the microphone (two-way communications are involved). Pixel 2 required permission to increase its volume level above the silly mandated Android “safe” level.

If you don’t have the adaptor, then you can plug a speaker into your network using Ethernet. It connects quickly and then you can go into settings in the app and change it to WiFi.

You can link any number of speakers into groups simply by dragging them together in the app. Then all will carry the same music. Of course, individual speakers and different groups can carry different music streams.

How good the system sounds will depend on which elements of it you buy. If you want to go high-end, a Heos enabled stereo receiver ($599) is ready to plug into any audio system.

As standalone speakers, both the Heos 5 and Heos 1 delivered performances that belied their compact size. The overall sound tuning was smooth, with controlled vocals and high end.

The Heos 5 had remarkably effective bass, making it easy to follow the bass line in all manner of music. Even the kick drum was delivered surprisingly well. It was very loud, albeit losing some of its poise in the process.

One element of music I particularly liked: the piano on the album Who Killed Amanda Palmer by, you guessed it, Amanda Palmer had an excellent bite and great presence.

I measured the bass output, and it managed an impressive 44 hertz before dropping away rapidly.

The Heos 1 managed a good level of sound, and was quite musical in delivery, albeit with considerably less bass.

The app works very well, once you’ve tapped on all the options and realise where everything is. To find settings for your speakers, though, you need to tap on “Music” rather than the speakers themselves. You can also name them for the rooms they are in.

How many multi-room speakers can do that?

GadgetGuys’s take – Best way to get into multi-room

If you have already committed to some multi-room system or other, then clearly the Heos system is not for you. But if you’re starting out Heos is one of the best systems out there, and these two speakers will likely form a large part of it.