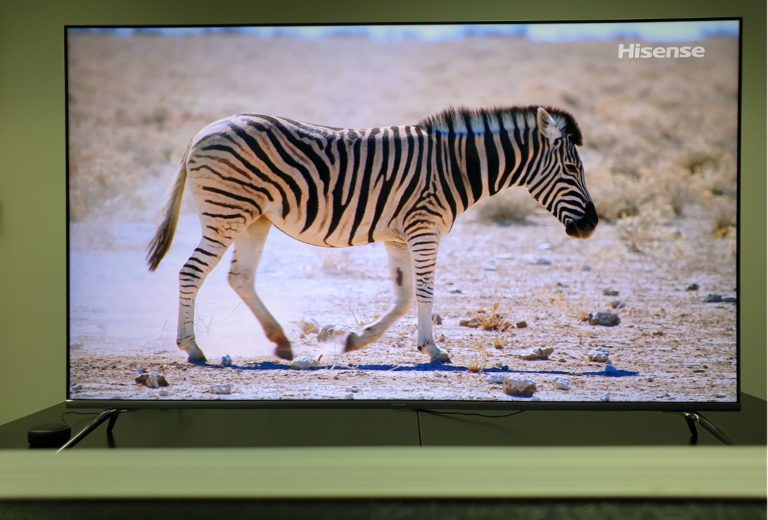 Hisense has two Quantum Dot series – the edge-lit series 8 and the full backlit series 9. GadgetGuy had some hands-on time with the new 75-inch Hisense 2019 Series 8 (R8) 4K Quantum Dot smart TV – and it is very good.

The Hisense 2019 Series 8 (R8) is part of the Hisense niche marketing strategy. By the way, ‘R’ stands for 2019 models and technology. The 2018 series was ‘P’, and while not bad, I can see the difference a year makes. That does not mean you don’t buy the P-series, but drive a harder bargain and try to step up the ladder if you do, e.g. if you were after a P7 try to get a P8 etc.

Our Hisense 65R7 review is here.

Disclaimer: This is a mini review over an hour at Hisense PR company’s boardroom. GadgetGuy cannot fully test the TV in that period – indeed Gadgeteer Thomas Bartlett usually does our TV reviews over a few weeks in his specially set up Canberra test lab.

Why the detail? Because we know what these TVs were like last year and we can see the tangible differences (Dolby Vision/Atmos and more) that make the 2019 models even better. And we note that the 65/75P8 cost $3699 and $4999 so Hisense has listened and repositioned its pricing to that of a challenger brand.

Maximum volume (100%) was 80dB, but it was a little harsh with high treble breaking up. Backing off to around 70dB cures that.

The sound signature is Bright vocal (bass recessed, mids/treble boosted) which means the pre-sets can take it to Analytical (the harshness we experienced) or to mid-centric. Overall it was pleasant enough for general TV viewing accentuating the vocal range.

But, it can decode Dolby Atmos (we suspect the internal decoder is 5.1.2 downmixed to 2.0) so get a Dolby Atmos 5.1.2 or 7.1.4 soundbar and you will really enjoy what this TV can do. The TV will pass the audio stream to the sound bar to decode. At present, the better soundbars come from Samsung, LG and Sony. Your choice really depends on your room acoustics, and whether you can use ‘simulated’ (psychoacoustic trickery) or need physical speakers for front L/R, centre, upwards, rear L/R and upwards.

Remember even a cheap 2.1 soundbar will add that needed bass to give music and movies the ‘warm and sweet’ signature they need.

It was able to fully reproduce the greyscale from black to white in 2.5% increments.

But in terms of true black, it was unable to get above 98% – still, this is very good for an edge-lit LED/LCD.

The image shows a bloom around the white square (0% black on 98% black) caused by edge-lighting. It was not highly noticeable, but the camera picked it up.

You can also see hints of the bottom edge-lit light. This was a pre-production model and I am told it will not occur in retail models.

Hisense uses a reflective panel that is quite reflective. While it is noticeable in a boardroom environment with harsh fluorescent overhead lights and the rest of the room blacked out, it does illustrate the need to control ambient light for best viewing.

Colour bars were excellent with little significant overlap. This is an improvement over the R7 and last year’s P8.

Using our favourite test clips from Star Trek Discovery, you can see that a lot more detail in the Klingons right eye than you could with the R7.

And it passed our test for oversaturated colours with natural colours where most TVs default to very much warmer colours.

It has a peak brightness of 2500 nits (well above Dolby Vision requirements), and our luminance test showed typical brightness of over 1200 nits.

It has a 200 Smooth Motion Rate – don’t get this confused with the refresh rate. In Australia, TVs have a native 50Hz refresh rate. Most TV content is at 24/30/50/60 frames per second.

In this case, the TV processor does a creditable job at reproducing higher frame rates. You can turn this feature on or off and adjust for smoothness or clarity (but not at the same time). I prefer the best clarity.

Hisense is a bit cheeky using the term Backlight – it is bottom edge-lit LCD dimming.

The Hisense Series 8 R8 achieves local dimming via PWM (Pulse Width Modulation). If you wanted 70% screen brightness, you would keep the digital signal on for 70% of the time and off for 30% of the time. These flickering ‘breaks’ are rapid, with the frequency measured in Hertz (Hz), or the number of times per second.

Your eyes cannot see this as the refresh rate is a higher frequency than you can see, but we can photograph it using higher shutter speeds. Because it is LCD based with an LED edge-lit light source, you can see the flicker.

The flicker was less pronounced with the R8 compared to the R7, and the cure is to increase brightness as far as you can stand.

Quantum Dot is superior to standard LED/LCD in terms of colour accuracy and the ability to display a higher colour gamut (tones).

Hisense claims an 89° viewing angle (that is nearly a right angle) and the Quantum Dot R8 gives more colour depth and clarity than the R7 out to about 75° off-angle.

Quantum dot gives a superior picture to LED/LCD but cannot meet the 100% black of OLED. However, for the average Australian, this is a great picture. Me – I would buy the full back-lit if I was going to spend this kind of money.

Read our 65R7 review to cover the other features like the remote, VIDAA U 3.0 OS and more.

How does Hisense compare to LG, Sony, Panasonic?

Hisense is still a challenger brand, so most Aussies will start with brands they know. In GadgetGuy’s opinion, apple for apples – Hisense quality, reliability and support is on par and it a worthy contender.

You need to visit a showroom and look closely at colour quality, backlit type, brightness and if you like the image. These days all smart TVs do the job. Invariably it comes down to price.

It offers a superior picture to the Series 7 (R7) edge lit LED/LCD. It is a great all-around TV, but I can’t help but remember the fantastic Quantum Dot full backlit panel in last year’s P9 series. This year’s R9 may even be better.

So, in an aspirational sense if you were going to, but an R6 then stretch to the R7. If you are going to buy an R7, then go for the R8 …