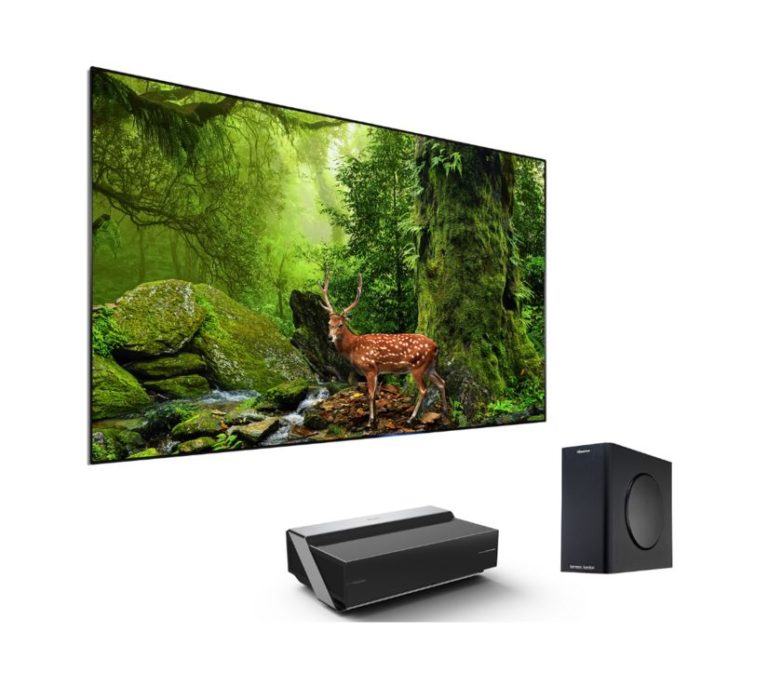 So, what is the significance of Hisense 4K TriChroma Laser TV projector? Well if you want a larger screen a projector – mainly with LCD, DLP and lately Laser light source – has been your best bet. The problem is that typical projector image quality does not match OLED or QLED – but hey they are big.

The Hisense 4K TriChroma Laser TV projector uses three lasers – on each for Red, Green and Blue (RGB that all TVs use) instead of a prism or other method of splitting a single light source.

“Well, its nothing like a video projector that we are used to. Forgetting the laser tech for the moment it is a full 4K HDR10, TV, internet device, has its own screen, a massive JBL 13 speaker Cinema sound system and wireless subwoofer (Dolby Atmos and dbx-tv upscaling) and has a normal TV-like remote control”.

That is important Val says, as there is no messing with remotes for the tuner, projector, soundbar and setting the TV up. If you can use a TV, you can use this. And it has all the usual input ports like a TV – 60Hz HDMI, USB, Ethernet, Wi-Fi AC and more.

The TriChroma projector comes in three screen sizes – 100, 120 and 150-inches – and takes the pain out of buying a separate screen as is the case with other projectors. The short-throw laser allows it to sit on a typical AV cabinet under the screen. As laser light is indirect, you can sit closer to the screen and enjoy better off-angle viewing as well. Its anti-reflective properties mean it does not require a darkened media room to show off brilliant blacks and REC.2100 colour space with HDR extensions.

Projectors may have been good for large screens, but the colours, brightness and HDR have al been lacking.

Hisense engineers have used three lasers to increase brightness allowing HDR10 (that means typical brightness of about 1000nits and a peak brightness of 3200nits). This is an open-source broadcast format that any HDR-compatible TV can handle. In other words, it is what everyone uses. Oh and Xbox and PS4 support it so it has become a default games standard.

And the speed of three lasers has enabled Hisense engineers to solve lag issues of projectors. The X-Fusion engine uses MEMC (inserting additional frames in between each actual frame boosting the frame rate of the video to up to 60-120 FPS) to solve the issue of blurriness. Hisense calls this Smooth Motion Plus and it gets over the issues of motion blur and image tearing on fast-paced shows like sports and action movies streamed from Netflix et al.

Last year Hisense introduced a $20,000, 100” dual laser 4K TV projector and while it is currently the leading Laser TV, the addition of the extra laser gives it so much more power to compete with far more expensive 100’ LCD and OLED TVs and be more of a mainstream lounge device.

You can find the latest product news from Hisense here:

Valens Quinn travelled to CES Las Vegas as a guest of Hisense Australia.