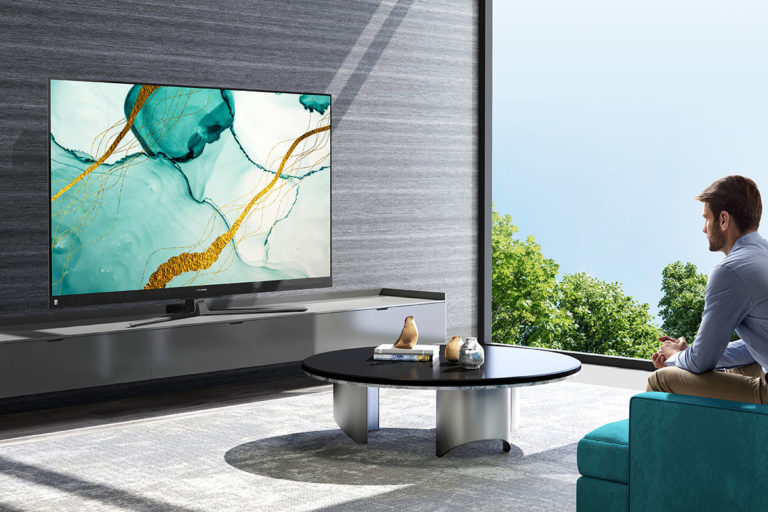 Some of us are old enough to remember when “Made in Japan” meant cheap and cheerful. And then, over the years, “Made in Japan” came to mean quality. Hisense is a Chinese brand. It has long since ceased to be cheap, although the pricing generally remains pleasing. And I think it is now nearing the completion of that journey to quality. Which brings us to the Hisense 65Q8 ULED TV.

“Q” is, for the moment, Hisense’s premium range. (Expect later this year its OLED-challenging ULED “Dual Cell” TV.) Let’s briefly run down the features of this year’s Q8 range from Hisense’s product page for this TV:

Other features Hisense mentioned in a briefing were 1000-nit peak brightness and front-firing speakers. Plus there’s a low latency games mode.

The first thing I noticed about this TV and its current version of VIDAA can be summed up in one word: responsive. You press a button and the TV responds. None of that spinning-icon-thinking-about-it-stuff. Hisense has packed a decently power processor into this TV. It tells me that the processor is of its own design, rather than an off-the-shelf model. There are lots of apps already on the TV, including Netflix, YouTube, Amazon Prime Video, Stan, Tubi and so on. Several of those have dedicated keys on one of the two remote controls provided with the TV.

As it happens, the review TV didn’t have either of the real remotes, but a slightly different IR one. But the TV you buy will have two, one using IR and one using IR and Bluetooth. The latter is a “voice remote”. You can press a button and speak into it to talk to the TV. Why talk to it? Because the TV has Alexa built in. You can use Alexa to tell it to do things, even if you don’t have any other Alexa devices.

The Hisense 65Q8 TV also supports voice control from Google Home. But for this you will need to have a Google Home device to speak to.

Talking to a TV

Since I didn’t have the correct remote control, I could not test out how well it worked with Alexa. But I do have Alexa devices so I simply used those. I set up Alexa on the TV – you have to sign up for a free VIDAA account – and all went as smoothly as it can with Alexa. As usual, doing the whole voice control thing can be a bit hit-and-miss. Simple things like “Alexa, Mute HiSense” worked fine. But then I tried something a little more complicated: “Alexa, play Netflix on HiSense.” The Echo Show 8 to which I was speaking said “Okay”, and moments later the TV started showing … an episode of “Peppa Pig”. It wasn’t clear what service it was playing from. As always with voice control, just practice a bit and see what works. No doubt more functions will become available.

Google Home also worked, although I must note that the on-screen instructions on the TV left several steps out. I did manage to find the relevant bit of the Google Home app and enable the “VIDAA Voice” – not “VIDAA Voice (Australia)” – service. Here’s how: in the app go to the “Home” screen, then tap the settings cog at top right, scroll down to “Works with Google” then look for VIDAA under “Add new”. They’re the instructions that should appear on the TV’s screen. And, indeed, just this afternoon I spoke to Hisense Australia and pointed this out. They’ll almost certainly improve those instructions in a future firmware update.

Other network functions on the Hisense 65Q8

Oh, one more thing. When you’re setting up a new smart TV, you’re going to be typing in your account details (or registering for VIDAA or whatever). Arrowing around the onscreen keyboard is a pain. I plugged the dongle of a Logitech keyboard into one of the USB ports on the TV, and just tapped away rapidly with my various details.

I could stream photos, video and music from my NAS using uPnP software. My photo test pattern revealed that the TV scales photos directly down to UltraHD resolution and retains full colour resolution. Some TVs run photos through a 1080p bottleneck. Videos worked nicely too.

I generally run through a series of clips, which I’ve identified over the years, to check different aspects of pic;ture performance. So, of course, I did that with the Hisense 65Q8 ULED TV. First, how does the TV handle 576i50 video coming from an Australian DVD? Pretty well, as it turns out. This TV succeeded to produce a decent image even with DVD and SDTV input.

My rule is, in general, turn down the “Sharpness” control on a TV to zero. Typically they emulate old-fashioned analogue sharpening. But this TV managed to pull off the trick of producing effective sharpening, even of standard definition stuff, without the usual detail-mashing ghosting of most sharpening processes. I think this is to do with Hisense’s new AI upscaler.

In fact, all the picture processing stuff was up there with the best. Progressive scan conversion of Australian DVDs (576i50) and HDTV (and some Blu-rays – 1080i50) was very solid, with the TV judging the correct strategy to use on all but the most difficult elements. One weakness was at the start of Chapter 10 of the Miss Potter Blu-ray, which is in 1080i. As the camera pans down over the title character’s new home, most TVs get briefly confused as the pan draws to an end, and this manifests as a small wobble in the window frames of the house. But this TV managed to make the whole picture jiggle a little. Perhaps the AI was confused.

That said, that was the only truly weird behaviour. Although Miss Potter did have me tweaking the colour a little. The greens came on a little too strongly.

Also impressive was the motion smoothing. It introduced very little distortion in the picture.

I generally do my serious viewing in a darkened room, so any weaknesses in black levels are usually quite apparent. In fact, the black levels of this TV were generally very impressive. On a couple of dark scenes I did notice a little mottling, which looked like the backlight breaking through near the edges of the screen. Just a little. Oddly, it was reminiscent of what you see with some edge lit TVs.

But this TV uses a LED array, so I went investigating. Using a test “pattern” consisting of a fully black background with just two bright pixels, I could see that the local area lighting patches were quite small. My best estimate is that the backlight is constituted by a grid of LEDs, 16 LEDs wide by 9 LEDs tall. That makes for a total of 144 lighting zones. That’s quite fine discrimination. I think the mottled scene that troubled me must have had some low level picture information in certain areas that caused the backlights to illuminate.

I expect that the 55-inch model would have fewer zones, while the larger TVs would have more.

All this means that the Hisense 65QW8 produces an extremely good picture. Add to that the strong smart TV functionality and the very respectable price, and Hisense clearly has a winner on its hands.