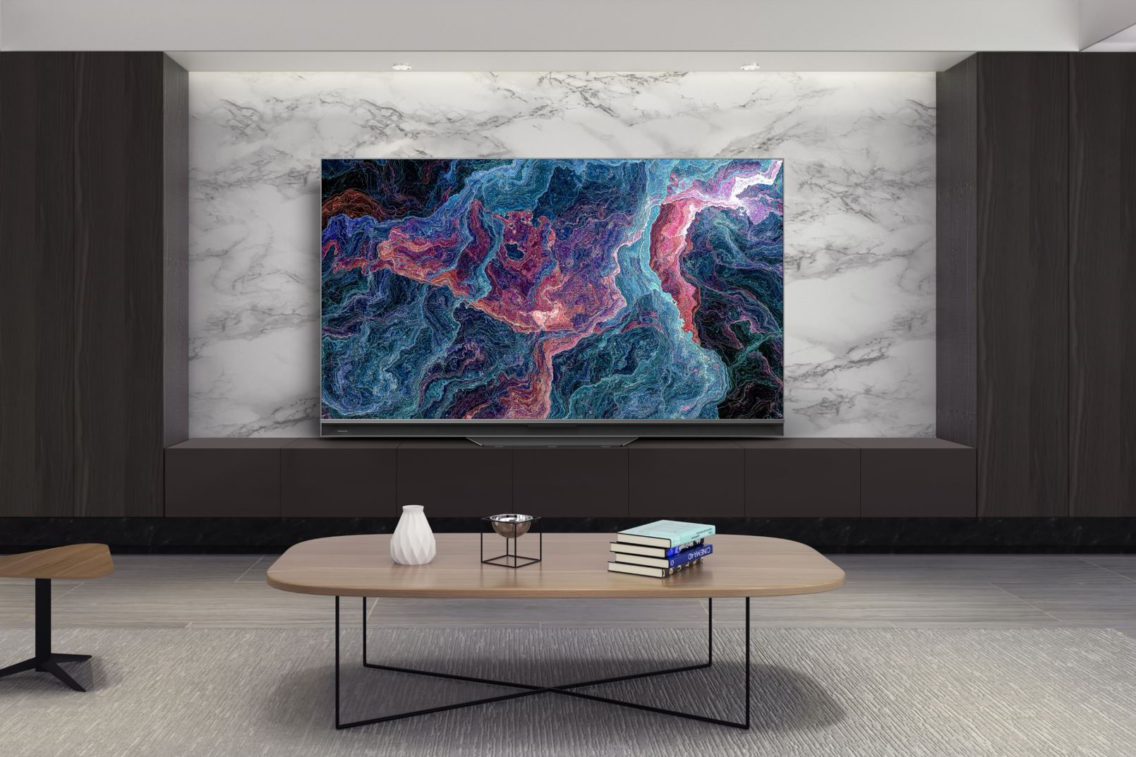 A 75-inch Mini-LED giant with stunning picture quality, the Hisense 8K Mini-LED U90G is perfect for watching television while the sun shines.

Mini-LED is the latest screen technology to take the fight to OLED. While OLED is considered the king of screens when it comes to contrast, Mini-LED has the upper hand in terms of brightness. Which one impresses you most will depend on what you want to watch, when you want to watch it and whether you have an eye for detail.

Weighing up Mini-LED and OLED also requires thinking about 8K resolution. While there’s a range of 8K LCD/LED televisions on the market, shopping for OLED generally limits you to 4K. LG offers 8K OLEDs, but they’re extremely rare and extremely expensive. If your heart is absolutely set on 8K, then you’ll likely want to stick with Mini-LED, but there’s little point in getting excited about it when we’re still starved for 8K content.

A 75-inch screen makes for a mighty big television, even with the extremely thin bezel across the top and sides. The speaker grill across the bottom of the Hisense 8K Mini-LED U90G compounds the effect, making the television look even larger while it sits idle.

When it comes to unpacking the television, thankfully, the stand is already attached to the screen. This makes for a bulky box, but it means that, unlike many televisions, you don’t need to lie the heavy screen down flat to attach the base.

Considering the size of the screen, the body is still surprisingly thin at roughly 5cm. The base is around 32 cm deep, ensuring the television remains stable despite its bulk. This monster tips the scales at more than 50 kg, so proceed with care if you have plans to mount it on the wall.

The Hisense 8K Mini-LED U90G backlight is divided into more than 1000 individually controlled zones. This way, it can dial up the backlight in the brightest parts of the picture and turn it down in the darkest parts.

Combined with Quantum Dot technology, the screen can produce as impressive 2000 nits of brightness. You don’t necessarily want the picture that bright, but it creates a lot of headroom to reveal the fine details in the brightest highlights and darkest shadows.

Gamers will be pleased to learn that HDMI 2.1 also brings support for Game Mode VRR (Variable Refresh Rate) and ALLM (Auto Low Latency Mode). These optimise the picture for playing games rather than watching movies.

Mini-LED’s brightness makes it great for watching television during the day in a bright room. Thankfully, the screen features an excellent anti-glare coating, along with an ambient light sensor that adjusts the picture according to the lighting conditions.

A great picture deserves great sound. The Hisense 8K Mini-LED U90G has two tweeters (clear voice) and two midrange speakers, accompanied by two woofers on the back. Dolby Atmos (DA) and DTS Virtual X audio metadata streams are decoded, downmixed and sent to the 3.2.0 system. Or it will pass through DA metadata to a DA soundbar.

Running Android TV ensures the Hisense 8K Mini-LED U90G puts the latest streaming services and other smart TV apps at your disposal. There’s also built-in Chromecast support for streaming from other devices, but you miss out on Apple’s AirPlay 2.

Android TV offers a very slick user experience, with features like cross-platform search and a unified home screen that serves up viewing suggestions from across the various streaming services at your disposal.

The slender remote control features dedicated Netflix, Amazon Prime Video, YouTube and Google Play buttons. While the sleek design looks good, the trade-off is that the buttons aren’t always intuitive, and it’s difficult to find the one you want in the dark. It’s also easy to accidentally press two buttons at once.

Despite its impressive credentials, the picture quality of the Hisense 8K Mini-LED U90G makes a poor first impression. Especially if you’re coming from a well-calibrated 4K OLED.

Of course, there’s little point in spending this kind of money on a Mini-LED television if you’ll never look beyond Standard picture mode. Cinema mode makes a good starting point when improving a television’s picture quality. This television’s Calibrated and Filmmaker modes are also worth a look. Separate picture modes kick in when you’re watching HDR and Dolby Vision content.

While the colours are bright and vivid in Cinema mode, the whites are still a little overblown, and you can see that backlight bleeding through.

Before diving into the brightness, contrast and advanced picture controls, try enabling the ambient light sensor. The results are impressive at night, instantly taming that backlight to the point where some people may not feel the need to tinker any further.

Other picture tuning options such as “Smart Scene” are less impressive. Watching the football, the grass continually changes shades of green as the television attempts to create the perfect picture.

Those with an eye for detail still won’t be satisfied at this point. If you’re keen on calibrating the screen, you’ll want to leave the ambient light sensor disabled, so it doesn’t constantly override your preferred settings.

The screen’s 200 motion smooth rate (a native 100Hz panel) helps reduce blur and smooth out the picture when it comes to fast-moving action in movies and sport. As with any television, you need to tame the motion interpolation, which creates extra frames in an attempt to smooth out the action.

Overly aggressive motion interpolation can cause the picture to look a bit fake – known as the “soap opera” effect. It can also cause moving objects to shimmer and glitch. Switching away from Motion Smoothing’s Standard setting helps, but this issue can still raise its ugly head on the Hisense 8K Mini-LED U90G. It’s particularly troublesome when watching football. The fact it’s only a native 100Hz panel, rather than native 200Hz, doesn’t help – but, to be fair, at the moment all 8K panels are only 100Hz.

Table scraps of 8K demo content naturally look stunning, but for now, you’ll rely on the television’s upscaling to bring your favourite movies, and TV shows up to 8K. Hisense’s AI-powered upscaling does a very impressive job, even with lowly DVD and standard-def television, but don’t expect miracles when you’re blowing it up to 75 inches.

During the day, the Mini-LED backlight and quantum dot display deliver bright, vibrant colours. This ensures you can watch sport or enjoy a movie – even with the blinds up – and it doesn’t look washed out. Nature documentary Planet Earth II in HDR on Ultra HD disc offers a rich, life-like picture. Even so, you’ll still need to play with the Motion Smoothing to eliminate shimmer in panning shots – perhaps because you’re upscaling from 4K to 8K.

Switch to sci-fi like The Martian in HDR on Ultra HD disc or Lost in Space in Dolby Vision on Netflix, and there’s none of the telltale bleeding that you’d expect to see on a television with a backlight. Naturally, the finest details in the shadows get a little lost in the light of day, but an OLED would struggle more in such conditions.

After dark, the tables are turned. It takes a lot more work to get a great picture from the Hisense 8K Mini-LED U90G. Especially if you’re not satisfied with relying on the ambient light sensor. Planet Earth II still looks impressive, but you need to fiddle to get a really vibrant yet life-like picture.

Switch across to space-bound sci-fi, and the television’s shortcomings compared to OLED are clearer. Even when you dive into the advanced settings, the blackness of space behind star fields looks slightly blotchy rather than displaying pinpoints of brightness against an inky black backdrop. Those pesky motion interpolation issues also make themselves felt in panning shots.

The speaker configuration offers a very wide soundstage. Standard audio mode sounds a little harsh, but switching to Theatre mode offers more full-bodied sound when watching a movie, thanks to the rear woofers. There’s also Late Night mode, which dials up the dialogue while dialling down the explosions.

Once they’ve mastered the audio settings on the Hisense 8K Mini-LED U90G, your average punter won’t feel the need to add a soundbar. If you want to hook up a soundbar or full surround sound system, you can take advantage of eARC over HDMI or SPDIF.

Mini-LED has delivered the first backlit televisions truly worthy of being mentioned in the same breath as OLED. Maintaining those bright, vibrant colours during the day – while keeping that backlight in check – the Hisense 8K Mini-LED U90G produces a stunning picture.

Come nightfall, and it is a different story. It’s not bad, but this television can’t hold its own against OLED – especially in dark scenes such as star fields where even the slightest bleedthrough is noticeable. Yes, we’re fussy, but this is an expensive television that’s going up against the best, so it deserves a discerning eye.

It’s not worth getting excited about 8K resolution yet. Thankfully, you’re not paying too much of a premium for 8K, considering the screen size, so consider it as a bonus feature that could pay off in the long term.

If you only ever watch television during the day, or you don’t bother dimming the lights when watching at night, to your eyes, the overall picture quality of Mini-LED will likely outshine OLED. If your television is mostly for movie nights and you have an eye for quality, OLED still has the upper hand.