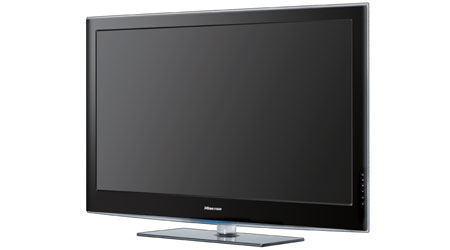 The Hisense HLS106T18PZL is obviously different from many other budget TVs in at least one respect: it is really thin. It isn’t the thinnest panel available, but you’re going to have to be really picky to complain about its 39mm depth, or about one-third of the thickness of the others.

The thin panel is courtesy of edge LED backlighting, which also contributes to making this TV the most economical to run. It scores an impressive 4.5 star energy rating (both on the sticker and by my measurement) and a consumptioin rating of 460kWh/year (sticker, my figure came in 5% lower).
It also has a set of ‘touch’ controls on the right edge for managing what the TV is up to, although of course there is also a remote. And there is a USB socket for the playback of music (MP3 only), photos (JPEG) and video (MPEG2 and AVI worked, but my standard DivX file wouldn’t play).
As delivered, the picture settings were really far too ‘hot’, even in Standard mode. For example, the ‘Sharpness’ control was set to 50 out of 100. But when I put on my test Blu-ray, it was obvious that this was adding a huge amount of ‘ringing’ (white lines around the edges of black objects in order to emphasise them), explaining why the picture lacked smoothness. It took turning it down to 8 or 9 to fix this.
But fixable it was. With the colour turned down a bit as well, the picture was very nicely watchable.
DVDs fed at 576i via HDMI were surprisingly soft, but switching the player’s output to progressive scan fixed that. At first glance the TV seemed to support 1080p24, but this made the TV’s menus virtually unreadable, and the motion smoothing mechanism (called ‘MEMC’) didn’t work properly. Blu-ray worked best at 1080p60. MEMC smoothed this out and handled the most complicated high definition scenes, with only the smallest amount of edge distortion.
Overall
Features
Value for money
Performance
Ease of Use
Reader Rating0 Votes
True high definition display; Excellent broadcast TV picture; Very good smooth motion with 100Hz video processing; Multimedia features with USB; Excellent 3 year warranty
Bumping up against the big brands price-wise; Black levels could be better; Can’t defeat overscan even on Blu-ray; Won’t accept 1080p24 input
3.8