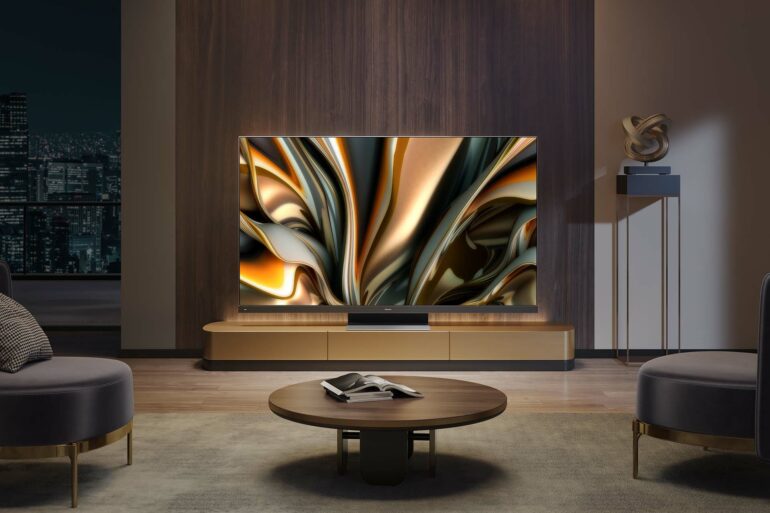 Known for its competitively-priced TVs that perform capably alongside the biggest display manufacturers, Hisense’s 2022 range introduces plenty of new features for all users.

From home cinema viewing to high-end gaming, each new product coming soon from Hisense promises to deliver a strong balance of performance and cost. Against the backdrop of a packed Accor Stadium for the first 2022 NRL State of Origin match – Hisense is a major sponsor of the competition – local representatives launched the brand’s latest range set to arrive in retailers from the end of June.

Entry-level ULED – upgrades for gamers on a budget

The U7HAU is the latest baseline 4K Hisense TV, which will support some major gaming features for the first time. With HDMI 2.1 support, it’s capable of playing games at 120Hz and has a dedicated Game Mode featuring variable refresh rate and automatic low latency to produce a highly responsive image and eliminate screen tearing.

Dolby Vision and Dolby Atmos are also part of the U7HAU TVs, along with adaptive features such as local dimming to assist with HDR content. ULED being Hisense’s backlight TV technology means it won’t necessarily display darker colours as deeply as an OLED display, but it’s well-suited for open plan areas with mixed lighting due to its brightness.

Hisense is aiming to provide you with options when it comes to TV panel lighting. The brand is continuing with Mini-LED technology, featured in the U8HAU and U9HAU models. Mini-LED technology is Hisense’s method of bridging the gap between brightness and contrast. Powered by thousands of small lights behind the panel, it reduces the glow or washed-out grey effect seen in some backlit displays, meaning there’s greater contrast between light and dark scenes.

After a while of not launching OLED TVs in Australia, Hisense is bringing them back with the X8HAU and X9HAU displays. What separates the two is the unique sound system housed within the X9HAU. Billed as a “360-degree audio experience” by Hisense, it includes a dedicated subwoofer and two up-firing speakers in addition to its sonic screen, adding more audio depth than conventional in-built TV speakers.

Arriving at retailers after August, the X8HAU has a 55 ($2,799) or 65-inch option, while the X9HAU only comes in 65 inches ($4,299). Like most of the new Hisense TVs, the OLED models will run on the VIDAAA U6 OS, which now natively supports Apple TV+ and Disney+ in addition to many of the other major streaming services, including an exclusive NRL TV app.

Hisense’s latest TV launch comes off the back of its recent home cinema technology launched earlier this year, the TriChroma Laser TV (120L9G). Similar to what other brands are doing – like the CineBeam projector range from LG – the TriChroma Laser TV is capable of beaming a huge image upwards onto a wall from short range. It comes with a proprietary ambient light rejection screen you can mount to a wall, available with the main projection unit in either 100 ($6,499) or 120-inch ($7,499) versions.

I was able to spend some hands-on (eyes-on?) time with the TriChroma, testing it out with some fast-paced F1 action from Drive to Survive, and Gravity, one of my favourite films. It displayed quick motion impressively well and showed great picture clarity on the bespoke screen. Gravity‘s dark outer space scenes came up beautifully in a dimly lit room, adding to the film’s exquisite cinematography.

Regardless of your home theatre needs, Hisense appears to have something for everyone. After seeing a selection of TVs up close, the bargain brand’s current and upcoming display options impress on paper and in person.

Chris travelled to and attended the launch event as a guest of Hisense Australia.