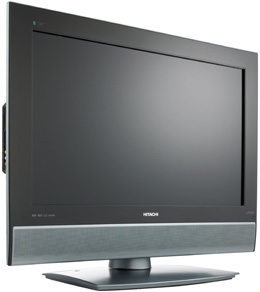 The Hitachi 32LD960DTA is an 80 cm LCD TV with integrated high definition digital TV tuner and support for HDMI.

It actually has two HDMI sockets (one can use a pair of analog audio inputs if your video source only has a DVI output, and thus can’t send the audio down the same cable). Unusually, for this price point, these support high definition signals all the way up to the progressive scan version of 1080 at both 50 and 60 hertz, making a good match for a HD DVD or Blu-ray player.

What it lacks is a digital audio output, so you can’t take advantage of the occasional Dolby Digital 5.1 audio transmitted with some high definition broadcasts.

The TV came pre-attached to a stand with a unique feature: it has built-in a little motor that can swivel the TV up to 30 degrees to either the left or right, controlled by a key on the remote.

As with many TVs, the digital and analog TV tuner modules are quite separate to each other, and have to be tuned individually. For digital, there’s a ‘Quick Scan’ feature in which you select your area and it homes in directly on the broadcast frequencies for that area. Except that my area wasn’t listed, so it was of little value. However the automatic scan worked well, if a little slowly.

The menu system is workman-like, but it has a good range of options. For much greater ease of use than many TVs, each of the external inputs can be selected with its own key on the remote control, speeding the process of getting this TV to do want you want it to.

One area of performance in which this TV excelled was something that many far more expensive TVs do poorly: handling interlaced analog signals sourced from film. Many TVs take the shoddy route of treating it all as though ‘filmed’ on a video camera, and reduce the resolution to eliminate video artefacts. Do this to properly filmed material, though, and the picture quality suffers noticeably.

This TV seemed to examine the signal, even if it was coming via S-Video, correctly detected whether it was film or video, and applied the appropriate processing in both cases. However you should leave ‘Film Mode’ switched on for this to work properly.

Hitachi doesn’t state a contrast ratio for the TV, and on this front it belongs firmly with the lower-cost range of LCD TVs. I would estimate that it was of the order of 1200:1, so blacks were a little too bright in a darkened room. But it was fine with ambient light in the room.

The HDTV tuner worked well, and the picture processing and scaling to the panel’s native 1366 x 768 pixels were well implemented, with a very smooth image resulting. The colours also were good, although a little blaring in the default configuration. The best preset is ‘Natural’, and you can tweak everything from there.

This TV does all the important stuff, except perhaps for black levels, very well, and at an excellent price.