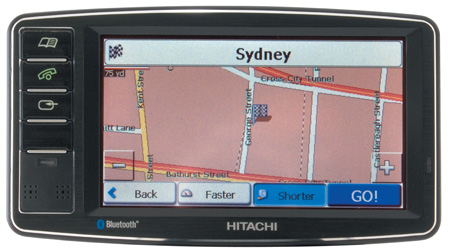 The MMP-501B is a huge GPS with quite a lot going for it. Its text-to-speech could be better, and we’re still not sold on in-car AV through your GPS. Still, the MMP-501B does it better than most.

The core features that make up the GPS side of the MMP-501B aren’t any different from many GPS units out there today; the same SiRFStar III GPS Chipset and the same SENSIS road data give the MMP-501B its operating capabilities. Where the MMP-501B does stand out is its sheer size. A full 5″ widescreen display might not seem that large if you’re used to thinking of TV sizes (typically 42″ and up), but compared to the run-of-the-mill GPS systems that struggle to run a 3.5″ display, the MMP-501B is huge. That has its downsides – you’ll never put this GPS casually into a pants pocket unless you happen to be nine feet tall – but the upside is that it has a lot of space to display maps, and for that matter, other entertainment material. The MMP-501B supports photo, music and video playback, either from an SD/MMC card, or directly in via an AV input socket on the side of the GPS.

The MMP-501 did a superb job getting a GPS lock and then re-calculating routes on the fly during our tests, which included deliberately driving off the proscribed course to see what it would do. We were less taken with its text-to-speech engine, however. Text-to-speech attempts to read out the names of roads you’re meant to turn into, and generally, most text-to-speech GPS systems are truly awful. It’s to the MMP-501B’s credit that it’s not awful, merely just poor at pronouncing names. It was also somewhat inconsistent; during one stretch of driving on and off the Pacific Highway around Sydney’s north, it switched from describing it as the Pacific Highway, and “Highway 83” (its numerical designation at that point).

As an in-car entertainment option, the MMP-501B does a better job than many players, thanks largely to its large display screen. We still feel that you’d be better off with a dedicated in-car AV system (such as a portable DVD player) that wouldn’t distract the driver, however.