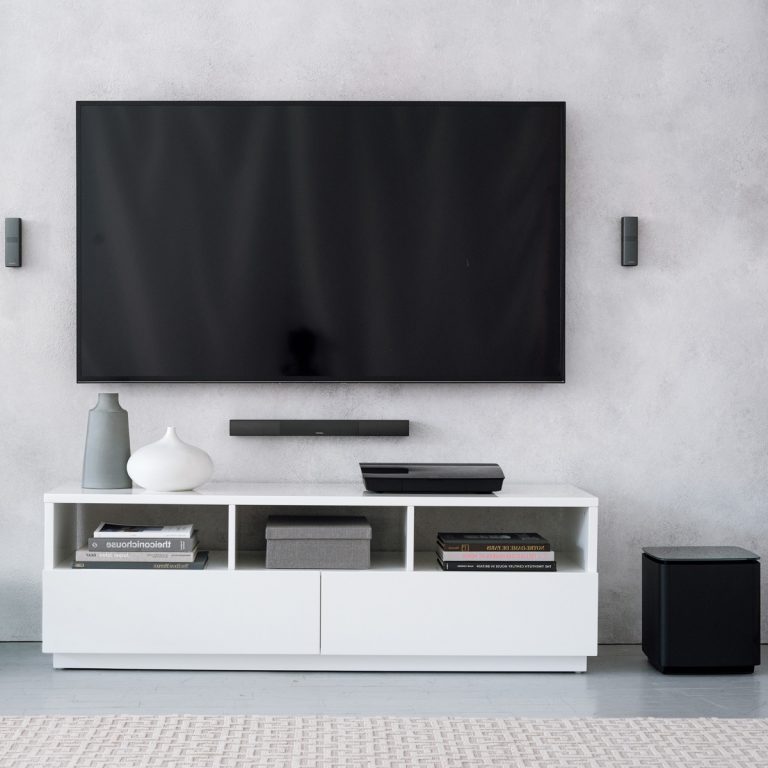 Bose has been challenging the notion that only big speakers can produce big sound since the release of its cube-shaped satellites in the 1990s. Small enough to fit in your hand, the diminutive speakers were capable of unreasonably high volume levels and, being teeny tiny, had the WAF (wife approval factor) that helped establish Bose as the aspirational brand for home movie and music buyers.

The four OmniJewel speakers in the new Bose Lifestyle 650 are the latest refinement of these original cubes, and at just 4.7cm x 14.7cm x 4.7cm (WHD) are the company’s smallest satellites yet, but also nearly cylindrical in design. The brushed anodised aluminium cabinet of each satellite has, across its middle, a thousand  tiny holes which allow sound output from the pair of high excursion transducers inside. These are positioned facing each other, a design Bose claims helps produce omnidirectional sound effects.

Certainly that was what we experienced in listening sessions with the Bose Lifestyle 650, with music and movie soundtracks sweeping seamlessly around the demonstration room with great drama and impact. There was an impressive vertical dimension to the sound too, which added nicely to movies but might not thrill music purists, with vocals appearing to come from the ceiling rather than a stage directly in front. No doubt there’s some clever sound steering in play here, courtesy of DSP (Digital Signal Processing) in the central console unit.

The rear speakers operate wirelessly or can be connected with speaker cables, but the front channels must be wired (front and rear satellites required mains power).

The slim centre channel is about as long as two satellites placed end-to-end and integrates five drivers in an enclosure cosmetically matched to the satellites – complete with perforations. Dialogue was nicely anchored to the onscreen action, with sound widely dispersed across the front stage and merging with effects from the left and right satellites.

Satisfying thump is added by the Acoustimass 300 bass unit, which features a 10 inch driver and new QuietPort technology.  This essentially folds the conventional bass reflex port inside the cabinet, a design Bose claims helps improve clarity by virtually eliminating distortion. Like the rear speakers, the Acoustimass 300 can receive audio signals wirelessly from the central console unit and, consistent with the luxury positioning of the Lifestyle 650, is topped with smooth, polished glass.

The same finish appears on the curved centre console unit, which packs all  the amplifiers for the system, the total power output of which is  not specified. Bose has a tradition of not providing technical specs, which earns the criticism of many technical types, but doesn’t seem to carry much truck with everyday audio lovers. From our perspective somewhere in the middle, the Lifestyle 650 went plenty loud enough, and what we experienced as over-strong bass can be adjusted within the system’s Unify setup feature.

Back at the console are 6 HDMI inputs for connecting digital devices, 4K passthrough for compatibility with most Ultra HD products, WiFi, Bluetooth and NFC streaming connectivity, and proprietary AdaptiQ room calibration for optimising sound to your acoustic space. The Bose Lifestyle 650 is also SoundTouch  enabled, so can join with other compatible Bose speakers over your home’s WiFi to create a wireless multi-room music system.

The Bose Lifestyle 650 home entertainment system costs $6,999, but budget-sensitive buyers  – or those unconvinced by omnidirectional sound – can choose the $5499 Lifestyle 600 home theatre system, which exchanges the metallic OmniJewels satellites for larger JewelCube models. The console, Acoustimass 300 and JewelCube speakers are available in black or white finishes.