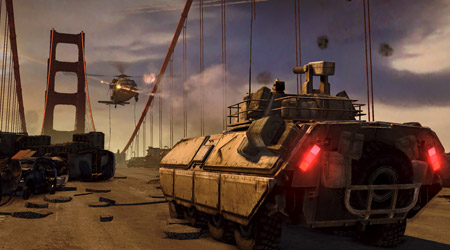 Hyped to the nines and promoted by THQ via the use of deliberately provocative images of a war-ravaged America, Homefront is a shooter that places Korea firmly in its sights as the bad guy. Probably the only really ‘easy target’ left for the more impoverished game-design minds in the business, North Korea is chosen because, hey, they’re Communists, so automatically deserve our hatred and, thanks to the exclusionary behavior of the country’s leadership, no-one is going to know anyone in North Korea personally, so it’s OK to make them the bad guys and portray them all as violent, unfeeling monsters.

A proposition reeking of the provincial jingoism that the US is so adept at providing, the scaremongering premise established at the outset continues throughout the game but is mercifully cut short by the length of the single-player campaign itself. If you’re experienced with this type of game, you’ll be finished in an afternoon.

This brevity would be easier to overlook if the core of the game was fantastic. But the gameplay is hugely derivative, taking cues from but not in any way improving on, more accomplished competitive titles. Most of the time, you’re following one of your unappealing comrades from the resistance, since you are apparently incapable of opening a door by yourself, and occasionally given tasks such as ‘blow up this thing’. Actually, that’s always the task. Artificially forced pacing leaves you constantly waiting for the computer-controlled teammates to move and, more often than not, they then proceed to get in your way, take all the good cover or just plain get you shot. The ‘story’, such as it is, isn’t badly told, but it’s not sufficiently supported by the game engine and, consequently, lacks any meaningful impact.

Enemy artificial intelligence is dire – the first time we used ‘run’, we did so right across the path of a Korean soldier, who was slowly ambling towards us, and my character passed right in front of his face without any kind of recognition – relying on blatant ‘spawning’ to fill the areas. At one point, we counted – and summarily shot – 13 identikit soldiers as they clambered, helpfully one by one, over the exact same point on a fence, before we got bored and moved on, triggering the next predetermined scene. So much for ‘suspension of disbelief’.

The videogame industry is rife with excessively-violent games that are entirely unapologetic when it comes to the subject matter they cover. But without any kind of credible and sympathetic character development and such heavy-handed treatment of the subject matter, Homefront lacks any trace of the empathy or artistic merit that would make it provocative in any worthwhile sense.

The derivative, dull and inflexible gameplay, the relentlessly racist exposition – at one point your mate shouts ‘I thought I could smell Korean BBQ’ at the sight of a soldier burning to death – and brief single-player experience make it very hard to understand the hyperbole drummed up by THQ’s over-excited marketing and PR teams in the lead up to the release of Homefront. If you’re going to promise everyone something entirely new, it’d be smart to actually have something that is. Partially rescued by the online play, which provides novel ‘battle points’ that you can use on the fly, to improve your weapons, your chances of survival (especially if you’re new to the unforgiving nature of online play) or put you in a vehicle, Homefront is nevertheless an eminently ignorable, and ignoble, experience.