An hour with an LG OLED TV 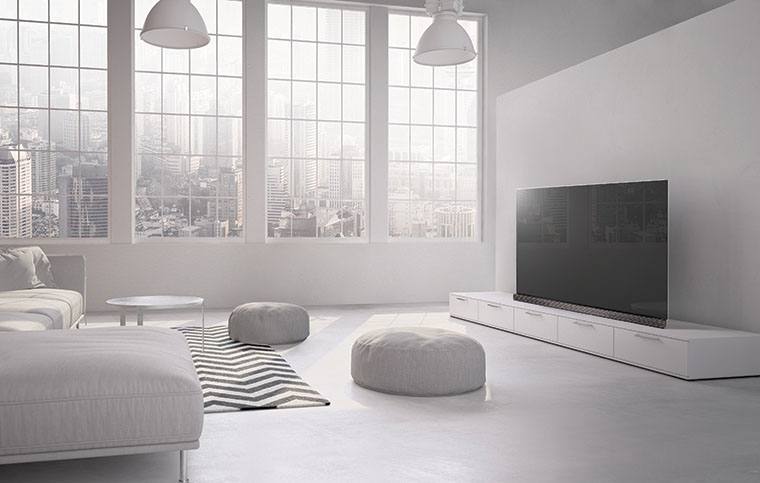 As I mentioned the other day, I spent some quality alone time recently with two new LG TVs in the offices of LG’s marketing firm. The hero product of the two was the LG OLED65G7T.

LG’s newest OLED series consists of four ranges in two sizes: 55 or 65 inches. The entry level range is the C7, then the E7 above that, then the Signature G7 and topped out by the LG Signature Wallpaper. That last one offloads all the bulky electronics into a soundbar, so the TV part is an ultra thin panel that can be fitted flush to a wall.

The one I played with was the OLED65G7T, the second from the top. It also has a fancy soundbar (with support for Dolby Atmos sound, no less!), but it’s attached to the bottom of the TV, forming part of its stand (and remaining attached, even if the TV is wall mounted).

This is a far from inexpensive TV. The retail price is $9099. Most of the panel is extremely thin – just five or six millimetres – because, being OLED, no backlight is required. Each tiny cell constituting the 8.3 million Ultra High Definition pixels generates its own light. Unlike older tech, such as plasma, the output can be wound smoothly all the way down to zero, and up again without having to apply some kind of a burst to get it started.

And that means perfect blacks at the pixel level.

Which in turn means that the colours tend to look better simply due to the contrast and the complete absence of any “washing out” by white light leakage.

In all smart and practical ways this TV was very similar to the Super UHD model I wrote about, so go there to read about WebOS 3.5 and the Magic Remote.

The sound of this TV was better than a regular TV, but I shall be honest: I really don’t care all that much. For me, the proper role for a TV is to make a picture. I normally use a 9.1 channel home theatre receiver and five surround speakers, four overhead speakers and a very, very big subwoofer to provide the sound. If you’re like me, be assured that the TV supports the Audio Return Channel so it can feed sound via HDMI back to your audio system.

Remember, if you are on a fast Internet connection and have a premium Netflix subscription, this TV supports streaming of UltraHD Netflix content, as well as content with HDR (High Dynamic Range) and Dolby Vision. So you’ll probably want to use it to stream from Netflix rather than use some third party device.

Unfortunately, the Internet connection at the test site wasn’t fast enough for UHD. But using a number of test clips on USB the results were simply stunning.

The problem with OLED for people like me who write about TVs is that their performance is so far ahead of the pack I’m not sure we would even be able to see any defects, if there are any.

Which is to say, for the moment the LG OLED65G7T is at the peak of TV performance. It is likely joined there by the Wallpaper model, plus the E7 and C7 ranges which I’m told have similarly performing panels, but lack some bells and whistles.