An hour with an LG Super UHD TV 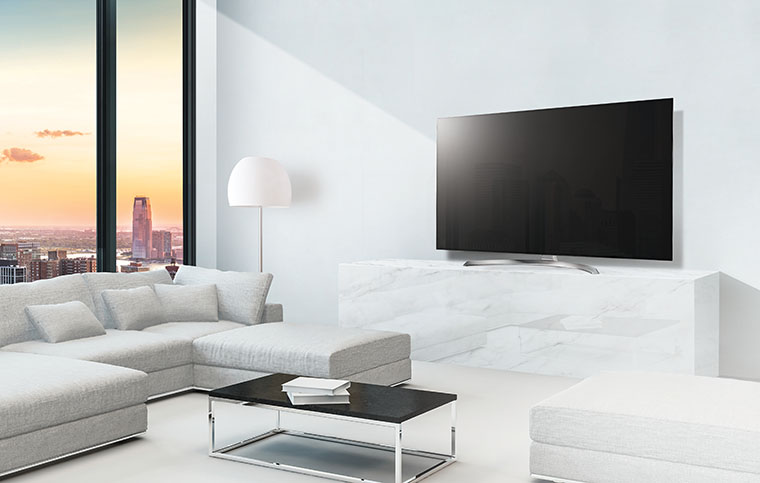 Last week, in lieu of my usual preference for reviewing TVs in my office, I spent a bit of time with two of LG’s latest TVs at its venue in Sydney. I’ll talk about the premium OLED model separately, but here I want to mentioned the smaller and much lower costing model of the two.

Super UHD is LG’s name for its top of the line LCD panels. They are are equipped with “Nano Cell” technology. I gather that this is a technique for creating more precise colours. The TVs are designed to be able to go very bright, with a wide colour range.

And of course they deliver full Ultra High Definition picture, with support for HDR10 – the standard increased brightness range for UltraHD Blu-ray – and Dolby Vision. That is an enhanced system for even wider colour ranges which, we are promised, will be appearing on UltraHD Blu-ray discs real soon now.

Unfortunately, I was somewhat limited in my ability to conduct the review due the absence of an UltraHD Blu-ray player, and the fact that the TVs weren’t plugged into an antenna. So I was limited to content on USB drives and streaming material from Netflix.

I’m well acquainted with LG’s WebOS operating system. On the current models it’s up to version 3.5 and it works much the same way that it has very several years, except faster. I’d say that the four core processer LG is using now is responsible for that. If you’re not familiar with it, I’d suggest you go to one of the chain retailers and have a play with it. The thing is, the smart functions on modern TVs work best with a point-and-click control system, like the mouse on a computer. You can use them by arrowing from thing to thing, but not very efficiently. LG’s Magic Remote (that’s its name, not a description) features a motion detector. It places an arrow on the screen and as you move the remote, the arrow moves. You put the arrow on what you want and press the button to select.

I find it quickly becomes easy to use, and is much faster than any other alternative – at least short of plugging in a wireless mouse. Which of course you can do (along with a wireless keyboard) if you want to use the TV’s browser for some heavy duty web surfing.

And while on network functions, the TV does sport an Ethernet socket, but also has dual band 802.11ac WiFi. That can be important in these days of high bitrate, UltraHD video content.

The LG 55SJ850T features a thin bezel, and is moderately thin across the panel – I’d say around 30-ish millimetres (not the few millimetres of an OLED TV). It has a neat rear treatment so it doesn’t look too ugly if placed other than against a wall.

The picture quality was simply excellent. Some of the UHD clips, especially the Dolby Vision ones, really popped with rich, powerful and bright colour, and all the scenes were handled with a lovely subtlety and subjectively deep blacks.

At extreme angles contrast dropped off a little, but from any reasonable viewing position, it remained first class. Importantly, those black levels were very even, rather than the sometimes mottled appearance they can have with some forms of black lighting, particularly when the screen is very thin.

With support for the newest – indeed, still forthcoming – video standards, with strong picture performance, and with a rather reasonable price, the LG 55SJ850T Super UHD TV is well worth a look for anyone in the premium market.