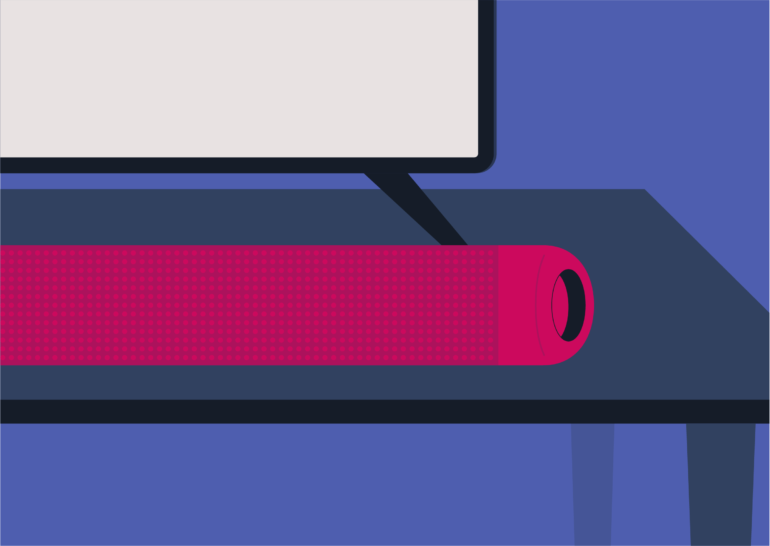 Let’s face it – TV speakers try, but they just can’t give you that big cinema sound at home. You want big sound, but space is at a premium and your particular domestic situation doesn’t suit a massive, multi-speaker surround installation… at least not yet.

There is a way to easily get big sound while maintaining a certain level of… aesthetic subtlety let’s say. The soundbar has been an option in home entertainment for a while, but have you looked at one lately?

Stylish, designed to blend in or enhance any space, packed with ports and plug-holes for all your devices, powered by amazing new technology… and capable of supporting subwoofers and even satellite surround speakers later on if you want to go down that route.

You can get a solid little performer for as little as $250, or go high-end and spend as much as you want for the ultimate in expandability, compatibility, and flexibility. A good range is anywhere from $500-1000. That will get you a soundbar with all today’s desirable features. What are those? Let’s explore.

Match for your TV

Unlike satellite speakers and traditional floor-standing loudspeakers, a soundbar is designed with your TV in mind. That’s why it’s shaped like a bar, after all.

Designed to sit under your TV, soundbars have minimal depth and height and string out all their tweeters and woofers in a line. It means the soundbar can all but disappear into your under-TV cabinet, or enhance the look of your TV by mounting to the wall for a clean, no-visible-wires look.

When it comes to tech, and depending on the model, some soundbars do more than just hang under a TV. They synchronise with the TV to audio track objects on screen, pushing the sound of, say, a car’s engine or a fleeing antagonist, toward the relevant edge of the screen.

Other soundbars work with the TV’s own speakers to essentially fill in all the audio gaps those speakers can’t manage, Not just boosting the bass, but also the mids and the treble. Such features typically work only between ‘compatible’ equipment, so TVs and soundbars from the same brand (think LG, Samsung and Sony).

And if you’re one of those lucky folks who has a weather-resistant outdoor TV, there’s a likewise weather-resistant range of soundbars for you too. They don’t just reject dust and moisture but are tuned for maximum audio clarity in the great outdoors – perfect for watching the grand final on the back deck.

Match for your room

A soundbar performs a very particular role in your home entertainment stack. It’s not just for boosting weedy TV sound to cinematic levels, a soundbar also has to blend in with your decor. It’s a subtle-looking device, even as it blasts out the big beats.

Some soundbars are wrapped in luxurious but acoustically transparent material, and are rounded to look almost like a high-tech bolster for a fancy sofa (remember those?). But colours tend toward the earthy and the mineral, because at the end of the day the visual focus needs to go to your telly, not a big chunk of speaker tech.

There are plenty of variations on the theme – you can find soundbars with a sleek, liquid metal look; that are nothing but a sliver of midnight black… you can even get one upholstered in leather!

Soundbars can be a match for your room in ways other than aesthetics, too. Premium ranges from many brands now include clever AI room calibration that tailors sound to your listening space, adjusting sound on the fly to compensate for room size, surfaces and objects.

Match for your ears

Back in the day, home cinema audio was all about surround sound, and creating a more realistic, all-encompassing audio environment. Soundbars provide a balance between the sometimes boomy and artificial sound of plain stereo, and the massive commitment of space and cabling that a discrete 5.1 or 7.1 surround speaker system demands.

Soundbars have a slightly different nomenclature when talking audio spec. A reminder: In a ‘5.1 channel’ surround system, the first number refers to how many satellite speakers there are (including centre and left/right speakers at the front), and the ‘.1’ references the big box of the subwoofer, for bass.

A soundbar, however, might be specced as a ‘5.1.4 channel’. That means five dedicated full-range speakers arranged along the front (and sometimes on a diagonal at the side) of the soundbar, and one dedicated woofer for bass. (This is either built-in to a larger soundbar, or if you are going for a super-slim model, it’s more likely to be a separate subwoofer).

The last number, 4 in our example, refers to four extra speakers that fire upwards and use your ceiling to reflect sound and create a more immersive audio experience.

If a soundbar only has two numbers (7.1 for instance) that means it has seven full-range speakers, and a woofer for bass, and no upward-firing speakers.

Why does a soundbar need upward-firing speakers? To bring it up to spec for Dolby Atmos and DTS:X sound, that’s why!

Dolby Atmos is designed to take surround sound to the next level… literally!

Before, no matter how many speakers you added, surround sound only worked in a flat plane around the listener. Dolby Atmos adds a height parameter to audio recordings. A film soundtrack or music album needs to be recorded using Dolby Atmos, but if so, it allows the artists and engineers to position instruments, people, effects and more, at different height levels as well as in front and behind the listener.

For this to work in your home, you need some upward-firing speakers. Software inside a soundbar thus equipped, can use clever audio shaping systems (maybe even algorithms!) to bounce audio off your ceiling and create that height effect.

DTS:X, meanwhile, is a competing system that creates a similar multi-dimensional audio effect around the listener, but doesn’t need upward-firing speakers.

In absence of Dolby Atmos content, those upfiring speakers can still find work do to, as most soundbars will have processor to approximate – with varying success – 3D vertical effects from regular surround sound formats.

Okay, we know, 3D surround audio from a soundbar at the front of the room is indulgent and magical… but does it make you best friends with your neighbours, or keep the peace with a spouse who likes to turn in early?

Other audio features on today’s soundbars have this kind of sociability factor in mind. Take Late Night Listening, for example. This is also sometimes called Night Sound, or something similar.

As for the neighbours, the problem has always been those big subwoofers. While many soundbars come with a separate sub, you can simply turn these off and the soundbar will compensate. Other soundbar models eschew the sub altogether, with woofers and bass ports in the soundbar that give you the thump, but don’t rattle the windows like a dedicated subwoofer.

And finally, there’s the option to pair your soundbar with a good pair of Bluetooth headphones. This isn’t as silly as it might sound, because you still get the benefit of all the soundbar’s audio processing, just routed to your cans instead of out the soundbar’s own speakers.

Match for your devices

Remember when a hi-fi system just meant a good amplifier and a couple of speakers? Ha ha, we were so young! An audio device today has to do so much more, and soundbars lean into that in a big way.

A soundbar is obviously more than just a line of speakers under your TV. It can also work as an AV receiver, and take the plugs of whatever you need to call your entertainment system complete. That might be a Blu-ray player, and/or a videogame console, or even a turntable for your hipster vinyl reissues (let us guess: you have Led Zeppelin III, right?). The first two of these can plug in to your TV’s HDMI ports, sure, but why muck around behind your TV or inside your cabinet when you can just plug in through the soundbar?

Using a system called eARC, your soundbar can receive audio (and play that) and video. The video it passes up to your TV. And with eARC, you can still use your TV’s remote to select between sources (depending on your devices).

One of the most convenient things about HDMI pass-through today is that it can support HDR and 4K. This means you can use your TV’s clever image processing features to get an amazing image, while relying on the soundbar to match that amazing image with incredible audio.

Wireless to your TV

If you’re going for a super-minimalist look, you can skip the HDMI and connect your soundbar to your TV via Bluetooth or Wi-Fi (assuming your TV supports this). It can be a bit of a fiddle to set this up, as you may need to compensate for a bit of audio delay, but many TVs let you tweak this via settings, and some soundbars do to. A bit of time fiddling is worth a true wireless audio set up, though.

Speaking of wireless, higher end soundbars come with (or can add later) a set of two or even four satellite speakers. Some even have additional up-firing tweeters inside to work with Dolby Atmos too. These don’t need to be connected to the soundbar with wires, but communicate over a dedicated wireless network. You’ll still need to plug each speak into a wall outlet for power, however.

But a soundbar can also be more than just an AV receiver, working only with audio-visual kit. It can also be the hub of a multi-room music system, and control multiple compatible speakers (usually the same brand) in other rooms. You can use the soundbar’s remote or an app to configure rooms, control volume and playback in different parts of the house, and more.

But a soundbar can also be more than just a multi-room speaker hub. No seriously. Soundbars can also be compatible with smart home systems like Amazon’s Alexa, and Google’s… uh… Google Assistant.

This means you can stride into the living room and command the soundbar to play music or turn on the TV. It depends on the model, but since voice assistant capabilities are constantly being upgraded over the internet, it’s not unlikely that a soundbar with voice control could eventually replace every remote currently balanced on the arm of your favourite recliner.

And finally, a soundbar can be a pure audio streaming hub, for all your music needs. With built-in Chromecast or Apple AirPlay 2, streaming from your Android phone or iThing can be just a tap away, or you can log in to services like Spotify or YouTube Music using an app, or via voice assistant defaults. Then you can stream high quality music right off the net, out your soundbar, and into your waiting ears.

Learn more about Soundbars in GadgetGuy reviews and news