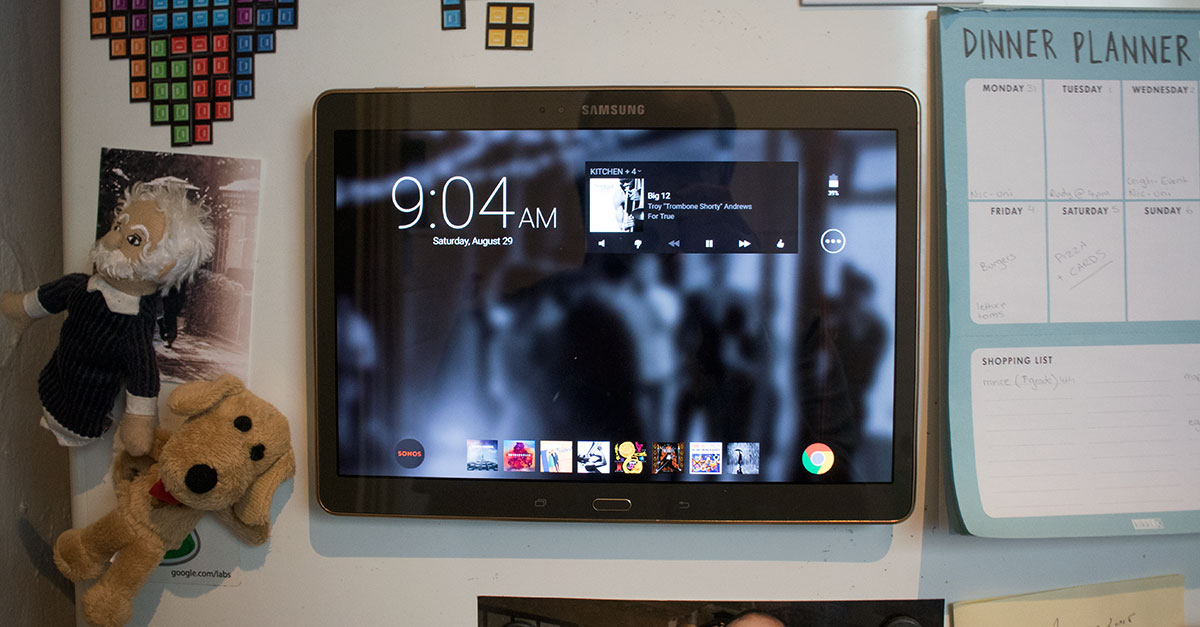 How to make an internet fridge in 2015

The importance of software

Getting your device onto the fridge is only one part of the equation, though, because it’s obviously going to need to do something when it’s up there.

If you have an iPad or an iPhone, you’ll likely just move the apps over to the first page of shortcuts you’ll be using, leaving the most commonly used apps within reach when you’re using your new super special internet fridge.

You don’t have to stop there, though, because you can turn your internet fridge tablet into a status board.

Unsurprisingly, a “status board” is exactly what it sounds like: a board that shows the status of events happening around you, such as the time, weather, news, and anything else you want to behave. It is very much like what you might see when you walk into a building with displays mounted to the walls, and is kind of reminiscent of what big shiny new buildings keep in their big shiny new elevators.

You too can have this running at home with one of two apps, using either Panic’s “Status Board 2” or Tamper’s “Morning”.

The first of these — Status Board 2 — is free, though if you want more than RSS news feeds, time, weather, and a few others bits, you’ll need to fork out a little over $10 to gain access to the app, which is iPad only at this time.

On the other hand, Morning is under $2 and works on both iPhone and iPad, making it a status board that can work on whatever device you happen to be freeing up. You can also opt to leave it running at all times if need be, though keep in mind this will probably chew up your battery life dramatically.

Unfortunately, neither of these apps allows you to map shortcuts to other apps, so while they may look nice, you can’t jump into Sonos or a web browser directly from them.

Android owners have a little more freedom when it comes to making their internet fridge into something like a status board, and that’s because Android has always been fairly open to letting you tweak and customise the look and feel thanks to launchers.

For those who haven’t heard of what this is, a “launcher” is essentially a replacement to the way your phone loads the home screen and app menus, with launchers also called “home screen replacement” apps because that’s exactly what they do: they replace the way your manufacturer has made your Android look.

There are numerous launchers out there all serving various functions, from the clean and locale-friendly to ones that feel like they’re pinching Apple’s iOS and plonking it on an Android tablet.

In the revision of our internet fridge, we wanted a minimalist experience in comparison to the icon-heavy thing we had going with the iPad 2 for so long.

What we did here was load up Nova Launcher, one of the more customisable launchers, modifying the interface to load only the apps we’d need in the main shortcut dock, and only throwing up a few widgets, providing a highly controlled status board.

This meant we could use HD Widgets for the clock, with this sitting next to the Sonos widget for controlling music around the house.

At the bottom was our shortcut dock, and here we used Macronos to export Sonos favourites into shortcuts, with Nova’s icon editing feature able to be used to change the icons into something more representative on each of the stations in question.

All of this resulted in a custom status board and internet fridge interface, with shortcuts to Chrome and Sonos easily viewed, as well as the Muzei live wallpaper that would randomly pick up on pictures of ours and blur them, creating a light trip down memory lane.

You can, of course, decorate your internet fridge tablet any way you wish, but for us, customising a launcher as easily controlled as Nova meant an experience that was made just for the household it was being used in.

How to be a cheapskate and make an internet fridge

While the ideas in this guide require a little bit of money to work, it’s not a requirement.

If you really want to do it on the cheap, you can always grab velcro or some duct tape, though we have some reasons as to why these may not be the best ideas.

One is stability, because while velcro and duct tape may well get the job done, sticking the device on a surface, it may not be the most stable way of holding a device weighing anywhere between 90 and 900 grams on said surface.

Some velcro is very good at this, and we need to acknowledge this, and duct tape can hold practically anything in place, but this possibly dubious stability lends itself to another problem you’ll have to deal with.

Simply put, it’s charging, as you’ll need to take down your device every so often and plug it back in, reviving the battery and returning it to glory so it can serve you as that internet fridge, status board, music controller, or whatever else you happen to be using your spare gadget for.

Needing to charge every few days means needing to take the device off the surface on a semi-regular basis, and that means holding it up with duct tape may not be the best bet due to how often you’ll be taking it down, putting it up, and so on and so on.

Velcro could handle this a little better, though it will depend on the size of the gadget in question and how will you’ve placed the velcro on the surface. If you’re good at putting the device back, you might be fine, though we’d find some particularly strong and stable velcro.