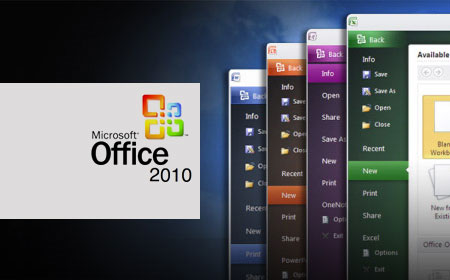 The latest version of Microsoft’s Office suite for PCs has been designed to better help people share their work online and collaborate with friends and co-workers.

If you’re familiar with Office 2007, you should have no problem getting into Office 2010. If you’re used to an older version of Office, you may have a little more work to get up to speed with the new suite. The most notable change is the interface, which is much more task-oriented. It’s designed so that you choose what kind of task you want to undertake, be it changing styles, reviewing a document, creating a formula and so on. The interface will change depending on the type of task you’re performing, giving you quick access to the functions appropriate to that task.

Below is a list of various versions of Microsoft Office 2010, and the applications you will receive in each.

In addition to the “traditional” suite that your install on a computer, Microsoft also offers an online version of the programs  – called Web Apps – that you can access through a Web browser. You can access this from any device with a Web browser and don’t need anything installed on the local device to use it. The Web apps don’t have all the features of the installed versions, but you can open and edit all your regular Office documents with them.

Getting the most from Office 2010

Become comfortable with the ribbon

We first saw the ribbon interface in some applications in Office 2007. It’s a set of contextual buttons at the top of the program Window. Every application in Office 2010 now makes use of the ribbon, and the ribbon has been updated for those that already had it.

To use the ribbon, you click on one of the tabs at the top of the screen, depending on the kind of task you want to perform. For example, if you want to review your Word document, you click on the Review tab. The buttons in the ribbon will all change to be appropriate to the task of reviewing the document.

Use the Backstage view

Instead of old File menu, Office 2010 can use what Microsoft calls the Backstage view. It’s a new way of managing your files. It has your usual Save and Open options, but it serves as a launching point for printing, gives quick access to templates and allows you to quickly publish and share your work with Windows Live, via blogs or through email.

If you go down to the Print Option in the menu, for example, a menu will appear that allows you to quickly set margins, paper size and print options without having to go to a separate Print panel. A live preview of the document will be shown with the changes you make as you make them.

Get to know the new PowerPoint

No program has seen as many changes in this version as PowerPoint. The biggest change is that PowerPoint now includes a video editor to bring life to presentations. You can cut videos, add effects and fades and add triggers to launch videos during your presentation.

Use the image editor

PowerPoint and Word also include a new image editor that allows you to modify, crop and etch images and add effects similar to those you might see in a program like Photoshop.

Make use of Jump Lists

One of the new features of Windows 7 is the support for Jump Lists, a way to quickly access application functions from the Task Bar and Start menu without actually having to open up the application. Right-clicking on an application icon brings up its Jump List, which may include recent documents opened in that application or common functions. Office 2010 fully supports Jump Lists, and you can use them to quickly access the most common features of your Office applications. For example, if you right-click on the Outlook icon in the Start menu or the Task Bar, you’ll see a Jump List appear, giving you quick access to new mail and appointment options.

Share and modify your documents with the Web apps