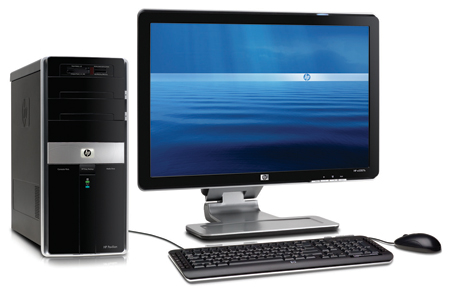 With PCs like Apple’s iMac and HP’s own TouchSmart on shelves, it would be easy to believe the days of the humble ATX tower are numbered. But there’s a reason the ATX standard was established: to allow manufacturers to create a universal platform that can be easily upgraded. So what happens when HP takes a standard PC, and applies a little imagination?

What HP has clearly realised with the ATX standard is that most of the interior of the case is empty space. As a result, the Elite’s custom case has a few nifty features. At the front, two large plastic doors hide a set of USB and audio inputs on one side, and HP’s bespoke Personal Media Drive bay on the other.

Where the obsolete floppy disk drive would have been ten years ago, now is a 15-in-1 flash card reader which can take any format you can think of, and a slot for HP’s own Pocket Media Drive.

In terms of raw horsepower, the 9390 packs a mid-range quad-core CPU, a decent video card, and has an onboard audio system capable of pushing eight channels. Pump this through the included HDMI port, and the Elite is a very capable media centre, should you want to connect it to your high definition television.

A Blu-ray/HD DVD drive and single-tuner high definition TV card rounds this off, and it’s just a shame the case isn’t designed in a way that would make it a little more lounge room friendly.

Your Elite will most likely be packaged instore with an LCD monitor, though technically it is sold as a standalone box.

One of the (many) problems with Windows Vista is that first impressions are not favourable. The first time you switch on the Elite, it will take nearly five minutes to boot up. Naturally, you’ll be outraged at this, but it is in fact just Vista’s first-time routine where it prepares the machine for its life.

Beyond this, there’s very little setting up that needs to be done. You’ll have to point the machine to your wireless network if you have one, and of course you’ll need to supply your own office software and games. But apart from this, it comes ready to use, out of the box.

Thanks to the strong processor and the generous dollop of RAM (4GB is as much as Vista Home Premium 32-bit can address) the 9390 performs well for both work and play. It has plenty of grunt for everything from video processing to most of the latest games.

The terabyte hard drive means you will have to work hard to max-out storage capacity, and it’s more than reasonable to expect this machine to operate as a ‘home server’ for all your music, movies and photos. With the appropriate equipment and a wireless (or wired) home network, all these entertainments could be shared among different rooms of the house simultaneously.

The gamer in us would like to see a beefier videocard at this price: the 9600 GS is adequate, but a latest-generation 9800 or even 260 GTX would give full access to the very highest graphics settings in the latest games.

Of course, you can upgrade the videocard yourself, but beware: with only a 350 watt power supply, the 9390 may not be able to provide enough juice for the more powerful videocards or too many extra hard drives. Fortunately, the power supply can be upgraded too.

If you’re determined to grab a ‘boring’ tower, then the Elite 9390 is worth a second glance. It’s sleek and trim, even if it does rely a little too much on hiding ports behind plastic panels which may not survive too many years of, shall we say, robust attention.

Traditionally, buying a package PC like this from a major manufacturer meant getting a machine with too low a component spec, but as components continue to get cheaper, we’re seeing powerful machines such as the 9390 becoming the norm.

This isn’t a gamer’s machine by any means, but if your family needs a reliable workhorse, the Elite is up to the job.