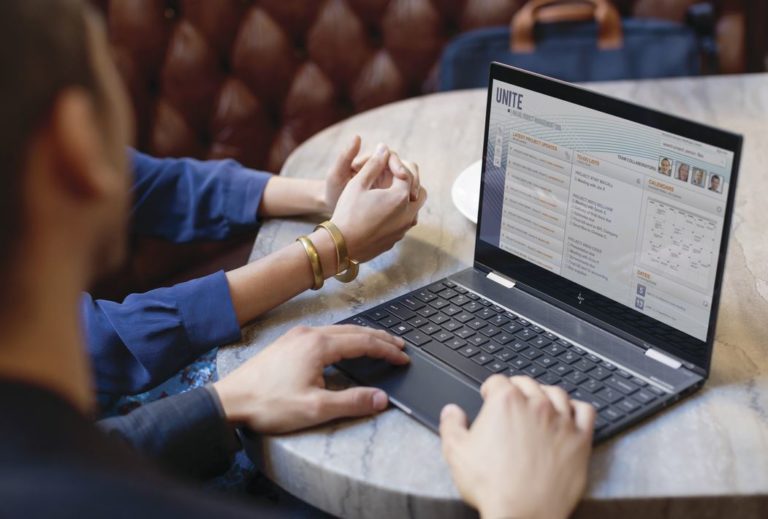 I have had the notebook for a few weeks. I like HP’s x360 hinge format, new injection moulded 3D alloy chassis, great screen, long battery and copious power from the new AMD Ryzen 5 APU.

Envy sits above the HP and Pavilion sub-brands and below the Spectre (prosumer and business) and EliteBook (enterprise). It targets consumers who want the good, better best scenario. They may want a Spectre but settle for an Envy for value. Good marketing strategy.

It is a choice of

AMD is Ryzen from the ashes

AMD is quietly assembling a cadre of loyal manufacturers. HP is using Ryzen four-core 15/25W mobile processors (for convenience Ryzen numbering is similar to Intel’s i3, i5 and i7 Core processors).

Ryzen is a seriously good processor design that has put AMD back on the map. It is no longer the ‘cheap’ x86 alternative.

Back to the review: HP Envy x360 13-inch AMD Ryzen and Radeon Graphics

I have had been using this for a month. Initial tests were good, not outstanding. Early international reviews said it was prone to hanging etc. Yes, I had minor issues too.

I put that down to early software. HP issued a firmware/software update on 5 August. This has made significant improvements. So, take any reviews before that date with a grain of salt.

This is an Envy? They used to look like any other aluminium notebook!

It is pretty. I love the dark silver ash colour. It is not so much of a premium product, but it stacks up well beside the more upmarket Spectre.

My aim is to see if the AMD Ryzen/Vega graphics are as good as others say it is.

The Envy uses a new injection moulded and pressed metal process versus the milled alloy unibody of the Spectre and EliteBook series. While the process is lower cost, the result is great. A textured, anodised finish and minimal side-to-side flexing. The detail in the honeycomb speaker grill and on the back is excellent.

The base can be removed using a T5 hex driver. It allows the upgrade of SSD – nothing else.

I love the x360 hinge. It is not as solid as the Spectre leaving the screen a little vulnerable to shake.

Underneath everything is a standard Realtek High definition audio codec. B&O then tune the four speakers (two under the honeycomb grill and two under the base). We are amateur audiophiles, so we measure maximum volume and frequency response.

This is a bright vocal signature that is best for voice. The B&O EQ has a full EQ and presets for movie, voice or music. These make minimal adjustments.

It is Dolby Atmos capable if you want to buy the software update from Windows store for $22.45. While I object to what amounts to paying for a driver I am assured it is to cover licensing fees. Dolby Atmos only works with wired and Bluetooth headphones. It will output a 5.1.2 signal to an amplifier/soundbar via the 3.5mm wired and BT.

Bottom line – great through Bluetooth and wired headsets but the speakers lack any perceptible bass for movie use.

HP claims the 53.2Wh battery is good for 11 hours. We ran a 1080p video loop at it lasted just over seven hours. General office productivity and web surfing should extend that to 9-10 hours.

The 45W ‘pin’ adaptor will fast charge to 50% in 45 minutes and a full charge in 1.5 hours. It can also charge using a 45W USB-C Belkin charger. The separate power is a good idea if you don’t want to invest in a USB-C power pack.

It can also use USB-C dongles or USB-C 3.1 docks like Belkin’s Express with pass-through power to add an HDMI screen or two, Ethernet LAN, extra USB-A ports and more.

The backlit (on or off) keyboard has well-spaced keys and is quiet. The throw is about 1.2mm and actuation force 40g. The feel is excellent I can achieve 85% of the typing speed on a mechanical keyboard.

The smaller 12.0 x 6.0 cm, 2:1 aspect t trackpad feels less expansive. It can only swipe 66% across the screen unlike the 1009% of the Spectre and Elitebook. It could do with a bit more vertical height, and it doesn’t have quite the same responsiveness or accuracy as the best trackpads I’ve used.

HP includes a stylus pen (on some models) which supports Window’s Ink 1024 levels of pressure sensitivity. It is not bad, but Spectre and Elitebook support 4096 pressure levels.

It has HP Wide Vision HD IR Camera which means it supports Windows Hello facial recognition login. The camera is .9MP (1280 x 720) and records [email protected] Colours are a little dull, but it is fit for purpose.

It has an integrated dual array digital microphone that can follow two people’s voices – good for a huddle group.

The 13.3-inch as tested has an IPS WLED (white LED WRGB) with Corning Gorilla Glass NBT.

Colours reach 89% sRGB, and colour distribution is even with a slight deterioration at the left and right vertical edges. Contrast is 1,100:1.

It is not for gamers – 30ms grey-to-grey is a little slow.

Bottom line: One of the better lower cost screens I have seen. It is fine for movies and Office

Welcome to the world of USB-C. Dongles are good!

It supports Wi-Di and Miracast.

The Ryzen/Vega APU has a 15 to 25W thermal design power. Let’s call them Thermal profile #1 and Thermal Profile #2.

On battery (#1) the whole unit is effectively throttled to the lowest CPU and GPU speeds. This is fine to lengthen battery life. Temperatures never rise above 30°, and fan noise is imperceptible.

On 240V power (#2) it unleashes the full power of the Ryzen APU up to 3.6Ghz. Temperatures go to 40° and fan noise increases accordingly.

This is also the case with Intel processors, but from my testing, the differences are not as significant.

We understand the lower video performance will improve with new Vega drivers.

This is blistering disk performance helped by using four PCIe lanes. You don’t typically find this on a lower cost laptop.

One 1-year standard parts and labour (1-1-0) limited return to base warranty. Analysis and remote diagnostics now use web Chat.

I tested the Ryzen 5 which is equivalent in power to Intel i5-8250U. Apart from some early firmware issues (that completely disappeared), it performs better than expected.

I was disappointed with video performance. It is OK on 240V power but not so on battery. Having said that I watched a 1080p movie (the video test loop) and it was smooth with no jerking.

Overall the AMD Ryzen 5/Vega 8 (as tested) had good performance and was 100% reliable. There is no need to seek out Intel alternative.

We are rating this as a mid-level notebook where compromises are made to achieve a price level.