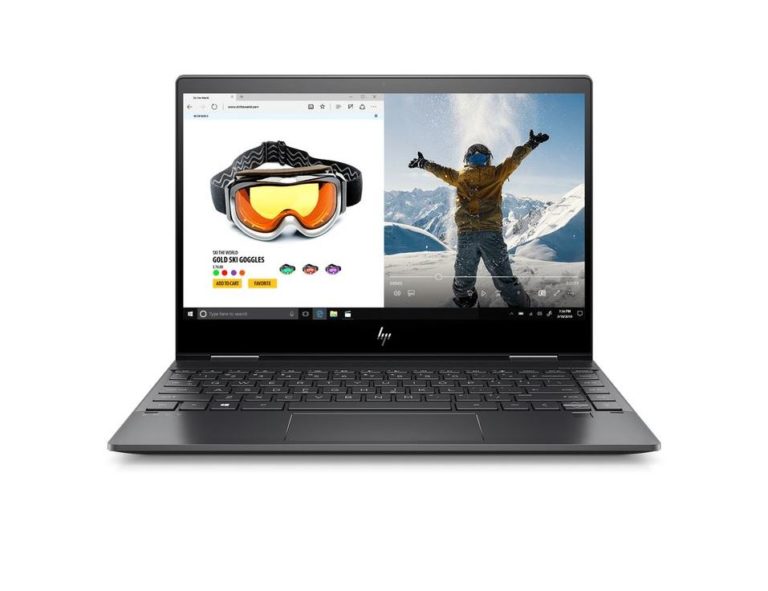 The HP Envy x360 2019 series sits about halfway up the HP range – Essential, Pavilion, Envy, Spectre and Elitebook, so you are getting many of the high-end specs for the price. The trade-offs are an injection moulded polycarbonate chassis (that is just as rigid and strong as aluminium) and perhaps not the latest tech like BT 5.0 or Wi-Fi AX.

So, the HP Envy x360 2019 is what Joe and Jan Average aspire to. Will it meet and exceed their expectations?

Note: Test unit supplied by AMD, not HP. This model 13-ar0075AU does not currently appear on HP Australia’s website as HP preconfigures SKU’s to suit various retailers and channels. This is equivalent to the 13-ar0018au at $2099 (less the current bonus $200 gift card offer).

For our reviews, we use the words FAIL, PASS and EXCEED to denote performance in the various paradigms.

The thing that most drew my attention was the screen – it is bright and colourful, and you will find out why below. Add to that a decent keyboard, fast SSD and battery life and well – the AMD Ryzen version has lots to offer at a better price.

It is bright, colourful and the AMD Radeon software/driver allows for plenty of customisation. 100% sRGB means (standard Red Green Blue) – an RGB colour gamut that HP and Microsoft created cooperatively in 1996 to use on monitors, printers, and the Internet. It is a subset of AdobeRGB (creative professionals) and DCI-P3 (movies)

AMD and Intel fight it out in the x86 processor race. These days, model-for-model there is little between them. The AMD Ryzen 3, 5 and 7 series in the ‘U’ (low power) versions are roughly equivalent to the respective Intel Core i3, i5 and i7 series. Both have embedded graphics on the SoC.

It is a great SoC for general office work, productivity and casual gamers.

GPU – PASS for productivity and content but FAIL for ‘serious’ gamers

Most often compared to NVIDIA GeForce 940MX or 945M

Fine for non-demanding games 1080@10-15fps and no worse than Intel’s embedded UHD Graphics.

8GB RAM is fine for office use but not being able to expand to 16GB loses some points.

The SSD performance is spectacular, achieving more than 3000/1700MBps sequential read/write. That is high-end performance

You are not paying for Thunderbolt 3, HDMI or Ethernet, but you get a very competent USB-C and two USB-A ports. You will need a dongle or a dock to run an external monitor or two. 5Gbps will run 1 x 4K@60Hz or two x 1080p@60Hz.

Battery life is as expected for a 53W battery – if you need more, then you need to look at 80W or higher.

The backlit keyboard has three-coats nightfall black paint with reverse lettering. It will wear off eventually. The keys are 16x15mm with a 1.2mm throw and 40g actuation. Typists will find it a little light, but overall it is a good keyboard.

The 11 x 5.5cm trackpad is good but ‘clunky’ when you click it. It does not affect performance.

It is not overly loud, nor a sound signature suited to movies and music – more a clear voice. But you can play with the B&O EQ to fill in a little bass.

Injection moulded polycarbonate is the material of the future. It is well made, durable and has little flex.

What I like about this is the x360 design, terrific screen, very fast SSD and that USB-C supports DP and PD 45W. It is great for business or students that want a quality device.

I was impressed at the AMD Ryzen 5-3500U processor – for general office productivity and low-level online mobile games it is perfect.

What I am not as keen on is the practice of soldering RAM to the motherboard, but that is what you get at this price.

Ratings: To get more CPU/GPU speed, you are going to spend a lot more, so it is rates as a mid-market device.

Features
Value for money
Performance
Ease of Use
Design
Reader Rating0 Votes
Great screen
Perfect for home, office and student use
Battery life can be affected by heavy load - use it on 240V
4.2