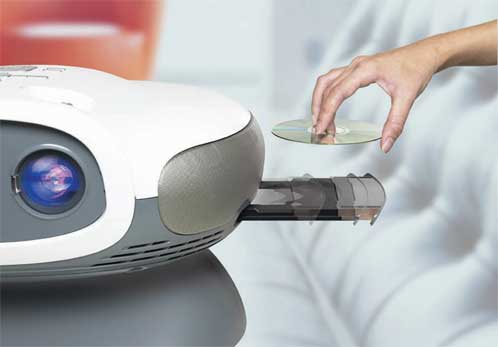 In recent years there has been a move by manufacturers to combine multiple devices into a single unit. Not only does it save space, but if often results in a more efficient product overall, with the classic example being the multi-function printer (MFP), that combines printer and scanner into a single unit. Today’s MFPs outsell standalone printers and the standalone scanner market is a shadow of what it once was. We have seen a similar move in the lounge room with DVD/VCR combos, and will see more later this year as an increasing number of manufacturers release TVs with built-in DVD recorders.

HP is the first company to offer a combo projector in Australia, and it has the potential to give the already booming projector market a shot in the arm.

One of the biggest problems with the projectors is the added expense of all the extras that are required, such as an external audio system and video sources, such as a TV tuner, DVD player, VCR, PC or set-top box. However, HP has solved much of the problem with its ep9010 Instant Camera by combining a Digital Light Processing (DLP) projector with a DVD player and a 2.1-channel digital audio system, including speakers and subwoofer, in a single, portable package.

The unit is mounted on an adjustable base and comes with a carrying handle similar to that found on the original iMacs, so you can move it from room to room and set it up on any firm surface in a matter of minutes.

The excellent short throw lens projects a sharp 72 cm (30 inch) image from as little as a metre away, and a maximum 264 cm (110 inch) diagonal image from about 4 metres. The lens has a maximum throw distance of 10 metres, making the unit versatile enough to be taken outside and set-up as an outdoor theatre on those balmy summer nights.

By using a six-segment colour wheel instead of the standard four, the unit is able to produce excellent colours, and the 1600:1 contrast ratio and 840 ANSI lumens brightness mean the projector can be used in a good range of lighting conditions without too much wash-out of the colour. However, the image does have visible lines, which while not a major problem, can be a bit annoying.

The built-in audio system is surprisingly good and serves the additional purpose of hiding any of the traditional projector fan noise. There also is provision to connect an external Dolby 5.1 surround sound system.

One of the great benefits of the integrated DVD player is the ease of set up. If you want to watch a movie you just put the projector in position, plug in the power, give it a minute or two to warm up, line it up with the screen and press play on either the projector control panel or the compact remote control unit.

But you don’t have to rely on the DVD and you can connect everything from a cable TV box to a video games console or notebook PC to the projector.

The overall package is stylishly designed with smooth rounded lines, rather than the standard oblong projector box shape, and one of the easiest projectors on the market to set up. This helps make it excellent value, and the combo set up adds a new dimension to home theatre.