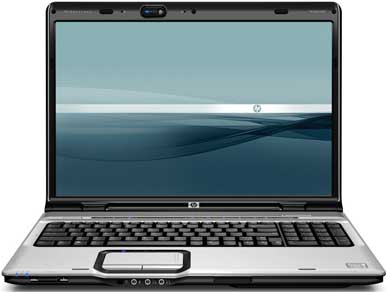 Like so many notebooks that fall under the banner of ‘desktop replacement’, HP’s Pavilion 9500 series notebooks aren’t really designed for lugging around. They’re big, heavy and will generally go in one spot and stay there – though you might find yourself moving the 9521tx between study and the lounge room on a regular basis.

The 9521 is one of a new breed of ‘media centre’ notebooks, packing in multimedia capabilities to rival the most feature-rich desktop PCs. It can record television, be used for video conferencing, play 3D games and be used as an HD DVD player.

As much as anything about the 9521, we like its style. Elegantly patterned in black, grey and magnesium, it’s nice to see a vendor that’s not simply following Apple’s lead, but making new design choices. And it works – the 9521 doesn’t appear flashy, but its understated simplicity makes it as appropriate for a board room as a lounge room, though it does have an awful tendency to pick up fingerprints.

Packed to the gills with multimedia features, the 9521 makes a more than capable media centre PC. For a start, it has a HD DVD player that’s also capable of playing and recording DVDs. The 17 inch screen is as bright and clear as any we’ve seen, though limited in resolution to 1440 by 900, and the Altec Lansing speakers are considerably more capable than the usual drek you get in notebooks – but still lacking in volume and depth – we’d recommend external speakers or headphones.

If you’re not keen on watching high-definition movies on your notebook screen, you can plug the Pavilion into an external screen using HDMI, S-Video, composite or VGA. You can watch TV on the Pavilion using a TV tuner ExpressCard that came supplied with our test notebook. It comes with a small antenna and a high-quality remote control designed specifically for use with Windows Media Center (which is part of the Windows Vista Home Premium OS that comes preinstalled).

You can also make video calls over the internet using the integrated webcam and mic. Its other connectivity options are quite standard: USB, FireWire, Wi-Fi, Bluetooth. There’s a fingerprint reader for security and flash card reader for your SD, MMC and other flash drives.

Armed with the latest processor from Intel and NVidia, along with 2GB of RAM, the performance of the HP during our testing was, as expected, very good. A HD-DVD movie played flawlessly on the system, and looked excellent, even though the screen resolution is not quite sufficient to deliver 1080p without downscaling.

The keyboard is spacious and comfortable, but the glide pad is awful. It’s far too sticky, so much so that we felt like we should grease our finger with olive oil before use. It’s just the kind of little thing that tends to drive one mad. On the upside, you still have a good remote to work with, and given you’re likely to be keeping this heavy notebook in a fixed location there’s a pretty good chance you’ll attach an external mouse to it.

There’s something a little vanilla about the Pavilion 9521. It has most of the features you’d ask for, but it too often stops short of making them insanely great. The screen doesn’t quite do full HD; the audio still sounds like it’s coming from somewhere distant; the TV tuner is an add-in card and you only get a single tuner; it has HD DVD-ROM instead of HD DVD-R; you can’t do analog capture; the hard drives only spin at 4200RPM. There’s nothing really wrong with any of these things, but the Pavilion fails to push the limits of design for a desktop replacement notebook.

That said, it’s a nice looking notebook (although some of the design patterns do look a little like coffee stains) with plenty of features and tremendous processing power.