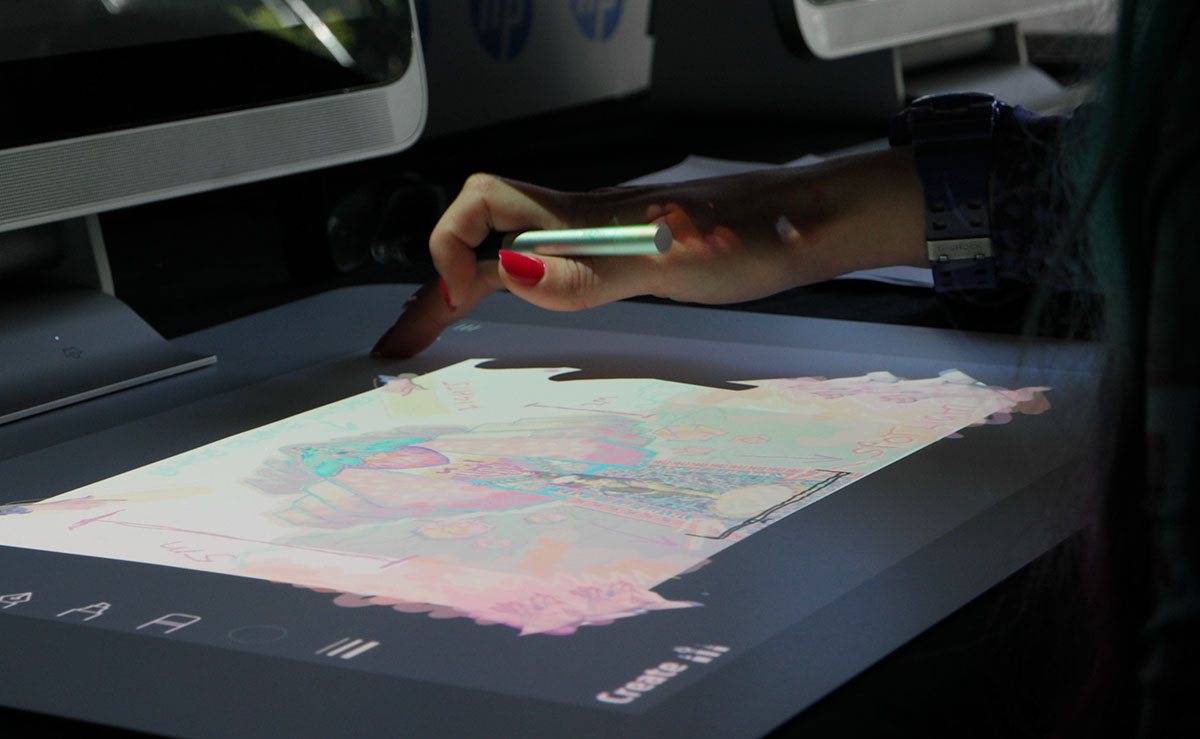 HP reinvents the computer for the creative and their kids

The creation of the tablet has certainly spawned plenty of unique portable form-factors, but what about the desktop? For that, HP has plans to change things around, and it will be doing it with cameras and projectors.

For its next trick, HP plans to make the PC change, with a move to making the machines many of us use on a day-to-day become something that people who love making art, creating things, or playing music will find more interesting and push their creative skills along efficiently.

Currently, the company is showing off its “Sprout” concept, an all-in-one desktop that comes with your regular keyboard and mouse combination, as well as the screen with all the hardware inside, but comes with a few extra features that no PC has pulled off in the past.

For instance, HP’s Sprout has a little box extending from the back of its 23 inch Full HD display, positioned down above it, almost as if it were wearing some form of sun visor.

This section contains two parts, with a small LED bulb powering a DLP projector, which will shine down a second screen — essentially a second monitor — onto a specialised 20-point 20 inch touch mat co-developed by 3M with a self-healing coating. The combination of the projector and touch mat means you’ll basically have a second display below your fingers, with two sets of screens taking up everywhere you look: ahead and below, allowing you to make the most of the space around you.

And of course, that 23 inch Full HD screen in front of you is touch-enabled as well, so you have touch control ahead of you as well as below, allowing you to draw and write with ease, while also positioning elements on a canvas using either touch interface.

You can use your fingers or even a pen, and HP is providing an Adonis Jot Pro stylus in the package, which will mimic the feeling of using a proper ballpoint pen, and this can even be attached magnetically to the side of the computer when not in use.

But a secondary screen is just the tip of the iceberg for HP’s Sprout, as that top section with the projector in it also has something else, something very unusual that no computer we’ve seen prior has inside: a 3D camera.

Yes, inside the little suspended above the 23 inch display sitting alongside the small projector is a 14.6 megapixel camera capable of taking 2D images like a scanner, with support for Intel’s RealSense 3D technology to grab models of objects in full 3D.

This means you can scan in artwork and magazine covers using the 2D technology, but also capture 3D models of pretty much anything small enough to fit on that 20 inch touch mat, with the scanner able to take simple and quick scans in up to two minutes, with more complicated and more complete models taking at least five minutes to do, with the ability to make these even more complicated through longer 3D scans.

When the scans are made, you’ll find proper 3D models available to you on your computer, with software making it possible to re-texture these, or even print them provided you have a 3D printer, of course.

If you have the skills to pay the bills, as well as a piece of 3D editing software like Blender or Autodesk’s Maya or 3DS Max, you’ll even find you can edit these, with HP telling GadgetGuy that these scanned models are fully editable.

Why is this important?

Aside for being useful for product design, if you have a broken toy from your kids, you may find this lets you repair a part with ease, with a 3D printer being able to print it off as needed.

Inside the computer, you’ll find a relatively capable machine, if not one running some slightly older components, with a fourth-generation Intel Core i7 4790S processor clocked at around 3.2GHz sitting alongside 8GB RAM and a 1TB hybrid hard drive with 8GB solid-state to move critical files into flash memory in a super speedy way.

For graphics, HP is tapping the power of Nvidia’s GeForce GT745 with 2GB RAM, and you’ll find the typical sort of connection options here with Bluetooth 4.0, 802.11a/b/g/n WiFi, and Gigabit wired networking, though none of that 802.11ac support we always hope to see.

And just like you’d expect out of a computer, you’ll find support for USB with two 2.0 and two 3.0 ports, a single HDMI port, and a card slot for throwing in SD cards if and when needed/

But really, the stars of this show are the projected screen and interface below the monitor, as well as that 3D scanner, making the HP Sprout into one of the most capable multimedia-friendly computers we’ve ever seen.

Seriously, it is hard not to look at this thing and just have not drop your jaw. Computers haven’t been made like this before, and if you’re a student learning how to play music or working on art and design, or even a professional working in either of these sectors, the Windows 10 computer could well be a game changer.

“Sprout is the first release of HP’s Blended Reality strategy and is the first step on our mission to deliver truly immersive experiences,” said HP’s Paul Gracey.

“The innovative and unique 3D Capture solution allows users to easily capture an object in 3D that can then be further modified, shared, and printed.”

To help bring this innovative computer to life, HP is already working with developers and publishers to make software that takes advantage of the new functionality being offered, allowing devs to grab an SDK and create software. Upon release, however, owners will find software from the likes of Dreamworks for making animations interactively, Crayola drawing software, touch piano applications, and even an origami training tool instructing people to fold paper using the projector built into the computer.

Pricing of the HP Sprout is where things take a bit of a turn, and unfortunately you’ll need a bit of coin if you want this new piece of technology in your home at this time, with HP starting the Sprout at $3999.

That’s not a cheap computer, not by a long shot, though it is — aside for that slightly older processor — cutting edge tech. Even without the latest Intel chip inside, the HP Sprout should be more than capable to handle creative workflows and even a few games, though, so don’t let the inside hold you back, and if you need to have a futuristic interface, this is about as future-friendly as it gets.

HP’s Sprout will be available from October 5 at Harvey Norman stores across the country.