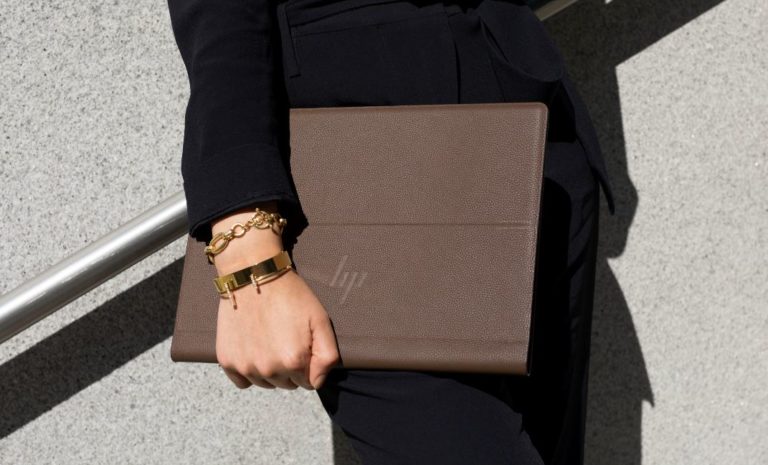 The HP Spectre Leather Folio is unlike any other laptop you have seen. It’s enough to make you commit several cardinal sins – envy, lust, greed, pride, and vanity at best.

HP calls the HP Spectre Leather Folio – the PC reinvented. And to my knowledge, there has been no other laptop with a 100% chrome tanned, full-grain leather casing.

It’s gorgeous, if you are into leather, and folds into what looks like a very svelte, quite thin, leather writing portfolio.

I don’t want to get too techy here – that would ruin the raison d’être which is to make possibly the most desirable convertible PC on the planet today.

The HP Spectre Leather Portfolio is part of its new Premium range that also includes the new EliteBook x360 and Spectre 13 and 15” x360 designs. Nothing boring about these!

But let’s look beneath the cow skin!

To be clear, I have not reviewed this yet. I had a good hands-on at the launch that was all about style over substance – very un-HP like.

It has a clever design that allows it to be a traditional laptop, in tablet mode and entertainment mode.

Look and feel – its raison d’être

Perhaps the most important thing to buyers is what it looks and feels like – not what is under the cow skin!

It is desirable, very well made, sturdy in all three formats and – well I want one! But then I have always owned expensive leather writing portfolios.

There are nice touches like a stylus holder. Some models come with a standard Windows Ink compatible stylus.

It comes in Bordeaux Burgundy (exclusive to Harvey Norman) or Cognac Brown leather over a dark ash silver base and frame.

Battery life – another claim to fame

HP claims the battery gives up to 21-hours using an FHD video loop at 150nits (about half brightness suitable for aeroplane viewing).

The CPU/GPU enables this design.

These enable passive cooling, e.g. no fan and we are yet to see any performance ratings under load to determine throttling. Other devices to use passive cooling include the Surface Go, Dell XPS 13 and MacBook Air.

I can’t understand why the i7 has a lower PassMark except that it may be more heavily throttled to stay within the 5W TDP power envelope. Initial reports are that CPU is throttling is needed to maintain an internal temperature in the 55-65° range, so performance under load suffers.

Both use the Intel HD Graphics 615 GPU with an H.265 and Google’s V9 decoder. It will support dual external 4K@24Hz screens, but you will need 16GB of RAM to support this. Gaming will be at lower frame rates, and the screen has a slow 50ms G-to-G.

RAM uses the older LPDDR3-1866Mhz (versus newer DDR4-2400Mhz), but that matches the CPU’s performance and power requirements.

There is nothing wrong with these CPUs – they drive longer battery life. But those expecting or needing typical 8th generation Whiskey Lake U-series i5 or i7 performance will be disappointed and live with closer to 10 hours of battery life.

It is a 13.3”, 1920 x 1080, W-LED, IPS Gorilla Glass NBT covered touchscreen with smaller side bezels. It still has a larger top and bottom bezel. HP claim 400nits brightness. Independent tests show 98% sRGB and 62% Adobe RGB – fine for movies but not for professional video/still use.

Battery life is better by using an FHD screen. There is a 4K screen version coming, but that will sap more battery. If you want 4K, then go for the Spectre x360!

It looks like a premium screen that should provide enough brightness for outdoor use.

Currently, the units have a choice of 256/512GB and 1TB PCIe NVMe M.2 SSD. I understand that these are Samsung PM961 series and are at the top end of the performance scale, e.g. over 3000/1200MBps sequential read/write.

It has four B&O tuned speakers. I was unable to measure the volume or frequency response, but independent tests say it is a maximum of 70dB with little distortion is achievable. That is fine for personal use.

What I did glean from a quick listen is that there is no bass, balanced mids and highs giving it a Bright Vocal sound signature. It is a long way from the nirvana of warm and sweet for movies and music, but most use Bluetooth headphones for this, so this is not an issue.

It is a two-level backlit, chiclet keyboard. The throw is 1.3mm, and it has slightly heavier actuation to compensate giving it a shallow but firm feel.

The touchpad is precision glass (95 x 55mm), and cursor glide is smooth. It needs a firm finger to initiate a click.

It has two Thunderbolt 3, 40Gbps supporting USB-C power delivery and DisplayPort 1.2 over USB-C. In other words ideal for a dock like the Kensington ThunderBolt 3 dock that has our award for the Best for Windows.

GadgetGuy’s take: Commit the cardinal sin and envy one!

As a generalisation I like the HP Spectre series – these add some panache to an otherwise boring aluminium grey sea of ultra-light laptops.

I would buy the HP Spectre Leather Folio if I were a high-powered executive that needed to make a statement along with the $5,000 suit, equally expensive shoes, Porsche outside, etc.

But I suspect that the new Spectre 13 and 15” x360 offer better value and performance, so it depends on what your needs are.

On the plus side

On the negative side