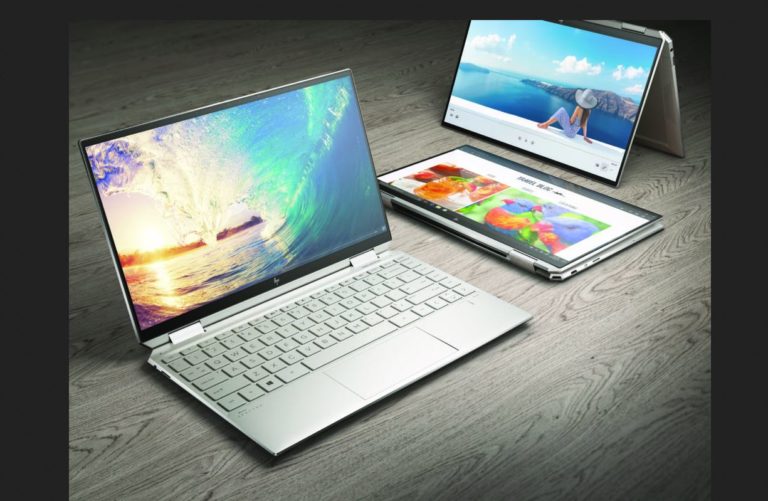 Apart from the drop-dead gorgeous 4K OLED screen option the new HP Spectre x360 13 (late 2019) is 13% smaller and lighter than the previous model. But to say it packs a lot more punch in a smaller body would be an understatement.

In fact, the HP Spectre x360 13 (OLED) has 22+ hours Wi-Fi and screen-on battery life from a 10th generation Intel Core i7 Ice Lake processor – that is spectacular.

In launching the HP Spectre x360 13 HP said that its challenge was a to design a new form factor that involved a 90%+ screen-to-body-ratio (small bezels) currently only seen on flagship smartphones yet retain the key front camera placement at the top of the screen. “Who wants to see a double chin from a pop-up keyboard-level camera?” BTW – its camera supports Windows Hello login and has an isolation switch for privacy.

HP also said that the race to thinness had produced some terrible disasters in other brands that had sacrificed keyboard throw, durability, battery life and repairability.

GadgetGuy’s note: While HP was not specially referring to MacBooks, the thinness race had led to considerable MacBook #keyboardgate issues, and terrible typing experiences on 1mm (or less) throw keyboards (all ). HP says it will not sacrifice typing quality.

And the HP Spectre x360 13, like most HP models, is entirely on-site repairable with modular components accessed via an easily removable base.

What is an Intel 10th generation Core an Ice Lake Processor?

The processor range has a high level of onboard Ai processing, 4K  HDR support (Iris Plus Graphics), always on and fast connectivity with Thunderbolt 3, Wi-FI 6 (AX) and optionally gigabit LTE.

The 1080p LED/LCD models are expected to be available in late October via HP.com (US website) and major retailers Harvey Norman, JB Hi-Fi, and The Good Guys, and start at $1,999.

HP Battery Recall – check if you own an HP notebook