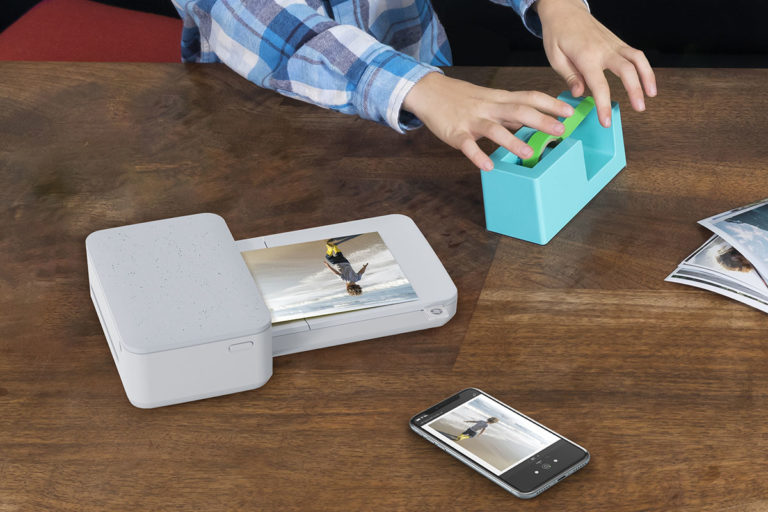 “Sprocket” is HP’s line of handy photo printers. We reviewed one of the early models back in 2017. But now we have our hands on the bigger, newer HP Sprocket Studio photo printer.

What is the HP Sprocket Studio?

The HP Sprocket Studio prints good old-fashioned 6-inch by 4-inch photos (approximately 150mm by 100mm). The standard Sprocket produces tiny 3-inch by 2-inch prints using Zink technology, while the Sprocket Select ups that to 2.3 by 3.4 inches. The HP Sprocket Studio uses a dye sublimation, three colour process. The resolution is 300dpi. Note, dye sublimation printers produce their colour gamut by overlaying the three different colours on top of each other in various ratios. Most other print technologies produce their colour ranges by dithering the primary colours next to each other in some pattern. To get similar results from, say, an inkjet printer would require much higher resolution.

The print cartridge slides into the side and the special paper into a tray with a capacity of twenty sheets. On your desk its footprint is 170mm wide by 270mm deep, but you’ll need to allow additional room behind it. It stands 68mm tall. There’s a substantial 24-volt, 1.5-amp power supply provided with the unit. It looks like it’d be perfectly suited to powering a HP notebook computer. Apparently power consumption can get up to 60 watts during a print.

The wireless feed is not via Wi-Fi, but Bluetooth 5.0.

Setting up the HP Sprocket Studio

As is the way of these gadgets, the instructions basically just tell you to install the app on your phone and follow its instructions. They were clear. The app found and connected to the printer without any fuss. It gave instructions for inserting the cartridge and paper.

The paper is slightly oversized – a little longer than 6 inches. The extra is required for paper handling and tears off at each end – there are very fine perforations – to leave borderless prints. The paper is glossy. Supplied with the HP Sprocket Studio is a dye ribbon cartridge with a capacity for ten photos, along with ten sheets of print paper. You’re going to run through those pretty quickly. Refills consist of a pack containing 80 print sheets and two print cartridges, each rated at 40 sheets. They cost $59 so each print will cost you nearly 74 cents.

Worth it? You decide.

To print, you switch on the HP Sprocket Studio and fire up the app. Find the photo you want in the app gallery. The initial view includes all the images on your device, including those in WhatsApp messages, screenshots and any other source of images. But you can change the view so that images are grouped under each source app. The app worked even with the RAW images on my Huawei P30 Pro phone. You can edit the images prior to printing, adjust colour, brightness and crop. You can even undersize the image if you need a smaller version or wish to include edges that might be pushed off the print frame.

Printing with the HP Sprocket Studio

If you prefer to access your photos in a different way, you can “Share” the image from another app to the HP Sprocket Studio. That opens up the Sprocket app to manage the print (and it again lets you do some editing if you like). For example, I have many thousands of photos on a Synology NAS. I could choose photos using the Synology DS Photo app on my phone and then “Share” them to make them print. The app also supports tiles, so you can print out your photo over four or nine prints. Then you can assemble the segments into a larger overall picture.

Tap the print button on the app and a progress bar shows progress of the transfer of the data to the printer. From tapping the button to the final print being released into the output tray typically took just over two minutes. There are four passes of the paper through the print machine. Each time the paper protrudes around ten centimetres out behind the HP Sprocket Studio and then is drawn in until it’s poking out the front above the output tray. The first pass applies yellow, the next magenta, the third cyan, the fourth a transparent “overcoat”. Prints are dry and HP says that they are water resistant and will last a century.

They certainly look good, with no banding and a finish that really is quite indistinguishable from old-fashioned gloss prints.

Because all the consumables are essentially “use once”, quality should remain as good as new for years. The HP Sprocket Studio is a fun printer, producing high quality prints. So long, that is, as you’re prepared to be limited to a maximum of six by four. You can purchase the HP Sprocket Studio from the usual retailers, or from HP itself. Note, as I write one of those retailers has it listed for $20 more than the others, so check your options.