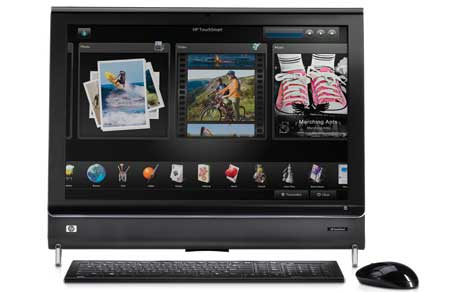 Whether it’s the hard drive in your PVR, the firmware upgrades to your Foxtel box, the internet connection on your PS3 or the Media Centre PC under the telly, computers are moving – inexorably – into the living room. In terms of your ability to network, manage, share and upgrade your digital entertainments, this is a good thing, but it typically adds a great amount of complexity too.

Enter HP’s TouchSmart, a PC that aims to take the making of music playlists, video DVDs and photo slideshows – plus online shopping and banking, video downloading and viewing, email and ‘Facebooking’ – out of the study and into the space where you actually live. What’s more, it wants to make that whole computer experience a whole lot more, well, un-computer like.

The problem with the mouse and keyboard is that while it’s a very effective way to interface with a PC, it’s not very glamourous.

The Holy Grail of the perfect PC interface still eludes us, but HP makes an intriguing offering with this second-generation TouchSmart PC. Designed for the kitchen or family room as much as the study, it brings touch-sensitivity to its 22 inch (56 cm) display. But there’s a catch.

The catch in question with the IQ508, is that it’s not a ‘true’ touchscreen interface. Instead of a pressure-sensitive display like on the iPhone, there is an infrared sensor around the edge of the LCD. As your finger breaks the grid of beams, it registers as the movement of the mouse. This simulates a ‘real’ touchscreen.

As for the rest of the machine, this is a well-appointed notebook PC dressed up in a desktop’s clothing – it stands on the bench via an easel-like hinge mechanism – and looking, more or less, like an attractive small-screen TV.

The guts of the PC are all notebook spec: mobile Intel processor, mobile graphics chip, SO-DIMM RAM chips instead of regular (and cheaper to upgrade) DIMMs. But this is actually a good thing, because the IQ508 runs quieter and faster than if you tried to squeeze ‘real’ desktop components into a package this thin.

There are a few extras, the best of which is the high definition TV tuner card, though with a single HD tuner you can’t watch a different channel while recording, and you can record only one show at a time.

Still, combined with HP’s capable custom interface (accessible by a touch of the Home button below the screen), this turns the machine into a slick high resolution TV, digital photo frame, or even VOIP phone thanks to the built-in camera and microphones.

Speaking of which, it will display the 720p high definition format natively no problem but there will be black bars at the top and bottom of the screen. Various options exist to ‘zoom’ 720p (and lower res) images to fill the whole display, by either cutting off the sides or scaling-up the image. But with a 16:10 display instead of 16:9, it’s always going to be awkward.

As a straight PC, the IQ508 performs well thanks to its decent specification. Unlike many other manufacturers, HP includes a generous 4GB of RAM, so even though SO-DIMMs are more expensive to upgrade than regular memory, you probably won’t need to for some years.

It also runs a 64-bit version of Windows Vista Home Premium, which is generally more stable than the 32-bit version shipped with most PCs.

It’s a shame the touchscreen is the main selling point because this is not the machine’s strongest feature. The IR sensor is just not as good as a real touch surface, with drag-and-drop operations the most problematic.

Also, thanks to a year with the iPhone and Apple’s extension of multi-touch to its MacBook Pro trackpads, a touch surface that can only recognise a single finger at a time seems positively primitive. You can’t pinch to zoom, twist to rotate, or use two fingers to scroll.

The IQ508 does have a ‘pen flicks’ system that allows you to execute a few commands with flicks across the desktop in a specific direction. This doesn’t hold a candle to multi-touch, though.

If you consider the pseudo-touchscreen interface as a sort of fun bonus, the IQ508 is a good choice for a kitchen or family room PC. You can check email with a few fingertip inputs (but keep screen-cleaner or a cloth handy to wipe away those prints!), and thanks to the beefy system spec, everything runs smoothly.

The IQ508 competes directly with a similarly priced desktop from that company which shares its name with a fruit, but while HP’s offering has a slower processor a smaller screen (22 inch vs 24 inch), it scores big for more RAM, more powerful graphics processing, and it bigger hard drive. Plus it’s got a HD TV tuner!

The bottom line is that while the IR sensor mightn’t be as good as a ‘true’ touchscreen, it does shave hundreds of dollars off the price of the system. This is a lot of PC for the money, make no mistake.