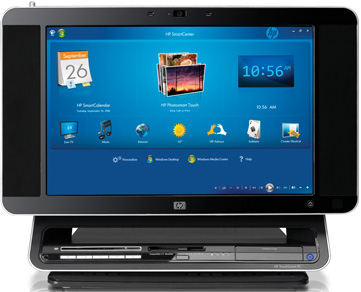 It takes a lot of guts to go up against the all-conquering iMac. Not that the iMac dominates sales charts or anything, but as an elegant, all-in-one PC it’s tough to beat. A powerful spec, good looks, and all the stuff you need with none of the extra.

One feature the iMac doesn’t have though is a touch sensitive screen, and that’s where HP steps in.

The TouchSmart PC aims to bring some of that Mac-style ease-of-use and family friendliness to the world of Windows, and while the device is a long way removed from the vision of the iMac, it’s still an impressive luxury item.

This is an all-in-one PC. That means you can’t separate the display from the “tower”, which in this case lies flat and takes up very little space indeed, for a desktop machine. That’s because the TouchSmart isn’t a desktop machine, it’s a notebook. It uses a notebook processor (the AMD Turion) and has notebook graphics (GeForce Go 7600).

But it does have a 19″ display which is super-clever because of the touchscreen overlay. You can use the Windows desktop without touching the mouse – instead just double-tap the icon you want with your fingertip. If you’re worried about getting grease on the display, use the included stylus which has a slot above the screen for storage.

Beyond the touchscreen, the unit is packed with features. There’s a built-in TV tuner with HD capability (though the display will only let you watch in 720p max), as well as a DVD drive with controls on the front. There are inputs for your camcorder, as well as plenty of USB and memory card slots.

In keeping with the single-cord philosophy (the power cord), the mouse and keyboard are both Bluetooth.

Software is mostly handled by Windows. Home Premium includes Windows Media Centre, so you can avoid the “hardcore” desktop completely if you like.Ã‚Â There’s S/PDIF audio out for your surround sound system (the unit has stereo speakers build into the display) but there’s no video output to use with a big TV.

Unfortunately, the TouchSmart isn’t exactly a desktop screamer. As a PC its spec is a mixed bag. 2GB of RAM is awesome, the video chip is good, but the CPU is lacking compared to the Intel Core 2 Duo family.

The touchscreen is also problematic. If you’re using this PC in a traditional seated position, it’s too high to be used comfortably. You’re supposed to use it standing up at the kitchen bench. Oddly though, the shape of the machine with the display right out front there makes it awkward to position on a surface that must be used for other tasks.

It’s also not a “true” touchscreen, but rather a regular display with a touchscreen overlay. This means touching the screen actually moves the mouse pointer to your finger before reacting, instead of being “instant”. There’s a delay, tiny yes, but irritating after a while.

As a TV that can also display your digital photos and surf the web though, it’s a solid performer.

This is a well-made machine with great features, let down by two things. First, the CPU really should be a beefier Intel unit. And second, the price. For $3699 you can spec up an absolutely incredible desktop PC that will do everything the TouchSmart does, a lot faster, except have a touch screen. It will also be bulkier, but you’ll get a much bigger display capable of true 1080p HD. And you’ll be able to output to a TV.

The TouchSmart’s list of clever features is almost endless – there’s the special bracket for HP photo printers with a special USB port so you don’t need to use an extra power brick for instance – but at this price it’s strictly a luxury toy for folks who want to live the Jetsons dream.

Overall
Features
Value for money
Performance
Ease of Use
Reader Rating0 Votes
Groovy touchscreen functionality. One one cord to worry about Easy setup and simple basic use Cool printer adapter.
Underpowered for a desktop machine. Touchscreen awkward to use when seated. Hard to upgrade. Surprisingly awkward to position.
3.4