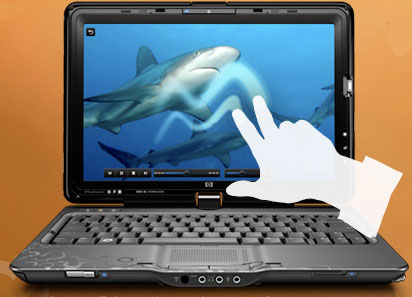 Building upon the touch innovation HP developed for its TouchSmart desktop PCs, the HP TouchSmart tx2 notebook computer was developed for people on the go who value having their digital content at their fingertips – literally.

The tx2 is the latest result of HP’s 25 years of touch technology experience, which began with the introduction of the HP-150, a touch screen PC that was well ahead of its time, in 1983.

The tx2 gives customers the choice to set aside the keyboard and mouse in favor of a more natural user interface – the fingertip.

HP’s multi-touch display delivers quick and easy access to information, entertainment and other social media. The tx2 recognizes simultaneous input from more than one finger using “capacitive multi-touch technology,” which enables the use of gestures such as pinch, rotate, arc, flick, press and drag, and single and double tap.

The convertible design with a twist hinge allows consumers to enjoy the TouchSmart in three modes: PC, display and tablet. With a rechargeable digital ink pen, users can turn the tx2 into a tablet PC to write, sketch, draw, take notes or graph right onto the screen – and then automatically convert handwriting into typed text.

Starting at less than 2 kg, the tx2 possesses a 12.1-inch diagonal BrightView LED display and an HP Imprint “Reaction” design.

The MediaSmart software was first brought to HP HDX notebook PCs in September, using the interface first popularized on HP TouchSmart PCs. HP plans to include the software in the tx2 and all future HP consumer notebook PCs.

The HP TouchSmart tx2 is available in the United States with a starting U.S. price of $1,149. There is no information at this time on an Australian release date and price.