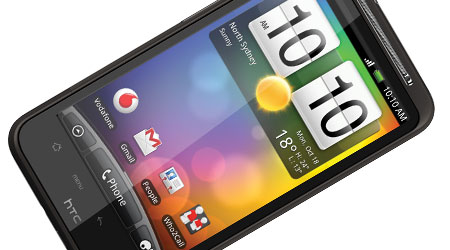 When HTC released the original Desire earlier this year, it became one of the best selling iPhone competitors. Now HTC has made its headline handset bigger and stronger. Is it better?

HTC’s newest top-of-the-range phone is the HTC Desire HD, a sophisticated looking handset that packs a fast 1GHz processor, 1.5GB memory with a microSD slot for up to 32GB in extra storage, GPS, Bluetooth 2.1, and WiFi 802.11 b/g/n.

Taking design cues from the HTC Desire that preceded it, and mixing it with the solid aluminium chassis of the HTC Legend, the Desire HD is a well built machine that shouts strength and durability. In fact, it’s the weight and solidness you’ll notice first when you pick up the Desire HD.

That and the display – a huge 4.3 inch capacitive touchscreen that shows a resolution of 480 x 800 and is absolutely sharp. Oustide of Apple’s products, this is one of the best screens on the market.

HTC has also added DLNA support for sending music, pictures, and videos wirelessly to other DLNA-enabled devices, such as televisons and music systems. If your TV lacks DLNA technology, HTC makes an option a plugin dongle to bring your TV up to scratch.

And with the HTC Desire HD comes the introduction of HTC Sense Online, a new feature that lets you track your phone if you lose it, ring it at full volume, and remotely delete anything on it if you fear you won’t get it back.

Improving the well-regarded Desire handset isn’t an easy thing to do, but HTC has done its best in making the Desire HD one step better.

The plastic exterior of the Desire has been replaced with solid black aluminium, and gone from the front are the physical buttons, replaced with touch-sensitive buttons beneath the huge multitouch screen.

The large screen is a positive and a negative, however. On the plus side, we love how clear and easy everything is to see. Images and text look superb, and this is probably the best screen we’ve seen on any Android device, even bettering the top that of the Samsung Galaxy S. It makes all interface activities easier, and coupled with the 1GHz processor and 1.5GB of memory, it provides one of the nicest Android experiences we’ve ever had.

But the screen is so big that the device is barely pocketable, and quite hard to use with only one hand. Those with big mitts might do OK, but we struggled on every singled-handed action we attempted.

Some of the additions to the HTC experience are welcome, with HTC Reader provided for checking out eBooks, a personalisation icon on the bottom right of the home screen and menu to let you truly decorate your screen and sounds, and a shortcut in the menu for turning your phone into a portable WiFi hotspot.

But because the Desire HD is a Vodafone exclusive, you’ll be lumbered with some annoying menu icons.

There are three “news” shortcuts and two for “music”, and, honestly, it would have been really nice of Vodafone to have customised shortcuts to their webpage with a Vodafone logo of some sort, similar to how Telstra icons mention “BigPond” in the art on its phones.

With two “Music” icons and three “News” items, good luck remembering which one takes you to the application and which one redirects you to a Vodafone webpage.

Vodafone has not, however, and since the icons have the same or similar name and you can’t uninstall the icons, you’re going to have to remember what the difference is yourself.

The battery life is a little disheartening too, achieving day-ish longevity before the conking out. It’s probably a good thing HTC chose not to include a front-facing camera, because with a recharge required every night, we can’t imagine there’d be too many happy video conferencing campers.

If you use a phone more than just for making a few voice calls, listening to music on the bus, surfing the web, and occasionally texting and checking GPS, you might want to buy an extra microUSB charger for keeping your phone alive while out and about.

HTC includes some nifty alert choices to help preserve battery life when it hits 15 percent – inlcuding turning off WiFi or GPS – but the advice actually comes too late to be much help.

With no outright pricing and plan price of $0 on a $59 plan, Vodafone has priced the Desire HD ambitiously – it’s more than a 16GB iPhone 4. When your choice of OS is Android though, the combination of a huge, clear screen, premium multimedia capabilities and lightning speed make the Desire HD an excellent smartphone.